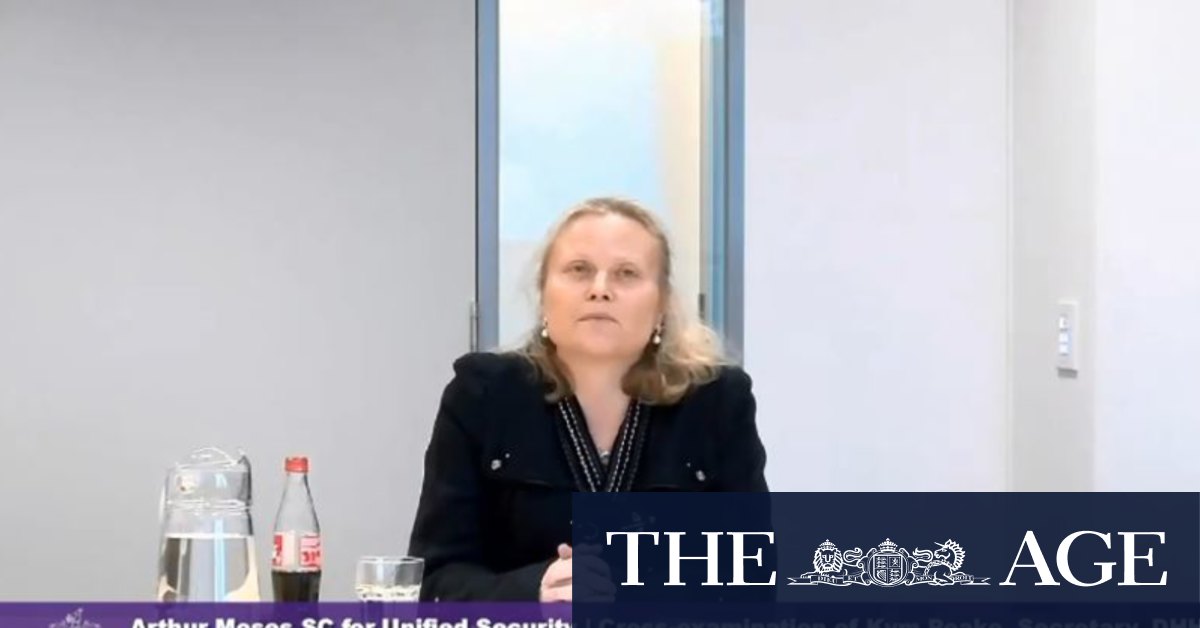 Ms Peake will be replaced by Professor Euan Wallace, the chief executive of Safer Care Victoria, who has been seconded to the Health Department to jointly manage contact tracing and outbreak management.

Both Ms Peake and fellow Victorian public service high flyer Simon Phemister, who as secretary of the Jobs Department also came under scrutiny during the hotel quarantine inquiry, were handpicked by Mr Eccles in 2015 to act as his deputies in the Premier’s Department.

Ms Peake was considered a leading candidate to replace Mr Eccles before the Coate inquiry into quarantine failings.

Ms Peake sent an email to Health Department colleagues on Thursday afternoon, shortly before Mr Andrews’ statement announcing her departure, informing colleagues of her decision, according to a source familiar with the email.

In a statement released on Thursday afternoon, Premier Daniel Andrews thanked Ms Peake for her work and said she “decided to step down from the position to pursue other opportunities”.

“Ms Peake has led significant reform that has touched the lives of many Victorians including the relief and recovery from recent bushfires, the establishment of the Mental Health Royal Commission, and the delivery of many of the recommendations from the Family Violence Royal Commission.

“We thank Ms Peake for her dedicated service to Victoria and for her tireless commitment throughout the pandemic and her time with DHHS. We wish her well for the future.”

In evidence to the hotel quarantine inquiry, Ms Peake said she had not briefed her minister, Ms Mikakos, on safety concerns with the program, even after a suspected suicide and a delay in transferring a COVID-19 positive quarantine detainee to intensive care.

In their evidence, Ms Peake and Ms Mikakos emphasised the quarantine program was managed by several departments and the Health Department was not solely in charge.

Mr Andrews, in evidence that prompted Ms Mikakos to quit, said the Health Department was accountable for the program.

The inquiry will hand down its final report by December 21 and former judge Jennifer Coate, chair of the probe, is set to make findings about the actions of public servants and other individuals involved in the program.

The Health Department was forced to hand over additional emails to the inquiry after it concluded its hearings. The emails related to Chief Health Officer Brett Sutton’s knowledge of the decision to use private security. The non-disclosure was one of the reasons the inquiry required additional time to complete its final report.

Ms Mikakos resigned over the hotel quarantine scandal in September. Mr Eccles, who ran the Department of Premier and Cabinet, resigned in October.

“The Heath Minister resigned in disgust and now two departmental secretaries have gone,” he said.

“But the blame for hotel quarantine and the second wave it caused lies with the Premier. No amount of sacrificial lambs will let Daniel Andrews avoid responsibility for the damage done to this state”.

Professor Wallace will start as departmental secretary on November 17.

An academic obstetrician and gynaecologist by training, Professor Wallace is Professor of Obstetrics and Gynaecology at Monash University.

Mr Andrews said Professor Wallace was a widely respected health sector leader who is “well-placed to lead the department through its next phase of pandemic response and recovery”.