The ghost of Tony Abbott paralyses Canberra on climate action 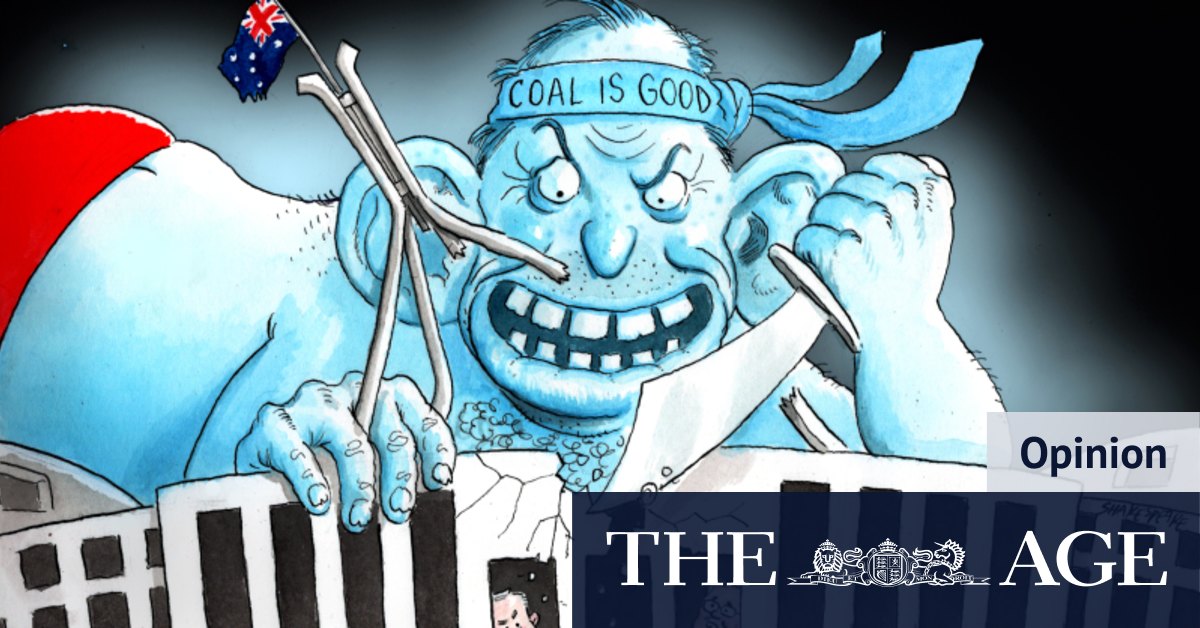 The incoming American leader intends committing the US to a policy of zero net-carbon emissions by 2050. This is a policy that Morrison dare not endorse, or even speak. Instead, he told reporters: “I raised with the President-elect the similarity between the President-elect’s comments and policies regarding emissions reduction and technologies that are needed to achieve that and we look forward to working on those issues.”

So he emphasises the common ground – the obvious fact that all countries need new energy technology to cut carbon emissions. And avoids the difference – that Biden has a long-term target, and Australia does not. The Biden office issued a readout saying the pair discussed “common challenges” including “confronting climate change”.

This is all fine within the Australia-US relationship. It’s just sad. The US was the wayward nation. Under Donald Trump it withdrew from the Paris climate accord and wantonly removed a host of environmental protections.

Australia, of course, has remained committed to Paris. And the Morrison government quietly has supported billions of dollars’ worth of new renewable investments in the states, granted major project status to the $22 billion Sun Cable project to export solar power from the Northern Territory under the ocean to Singapore, invested in hydrogen technology, and much more.

But rather than being able to welcome home the prodigal son of the global climate effort in a full-throated greeting to post-Trump America, Morrison is suddenly mute when it comes to the forbidden words. It’s just sad that a national leader can’t speak the taboo words of targets or deadlines in an area of policy on which the fate of his country depends.

The government’s climate scientists reported this week that Australia has warmed an average of 1.44 degrees since 1910. And continues to warm. “In terms of national daily average maximum temperatures, there were 33 days that exceeded 39C in 2019.”

For perspective, they added, that’s “more than the number observed from 1960 to 2018 combined”. In that 58-year span there were only 24 days that hot. In scrupulously neutral language, the report makes plain that last year, which seemed such an outlier with such intense and wide-ranging fires, will become a normal year. Unless the trend is interrupted.

The State of the Climate report, issued every two years, compiled by the Bureau of Meteorology and the CSIRO, says southeast Australia has lost 12 per cent of its annual April-October rainfall since the late 1990s. And when rain does come, it’s in more intense bursts. And we know what that means. Longer droughts and bigger floods.

Australia’s carbon emissions are falling. It’s just that, on the current trajectory, we won’t hit net zero for another four centuries. Or, more precisely, until 2393, as the Climate Council researcher Tim Baxter told my colleague Mike Foley.

It’s not that Morrison is hostile to the concept of going carbon neutral. When asked, he agrees that he would like Australia to hit net-zero emissions “as quickly as possible”. He just won’t put a date to it, and says it’d be dishonest to do so without being able to specify the cost to the economy.

This runs contrary to two iron rules of politics. One is that the more distant the date, the more likely the commitment, and 2050 is 30 years hence. Morrison will be 82, assuming he lives that long and the planet is still habitable. He’d be long retired and unaccountable.

The other iron rule is to emphasise the benefits of a policy you support, and dissemble on the costs. For instance, the government is raising hundreds of billions of dollars in fresh Commonwealth debt in the bond market. It boasts about how it’s supporting the economy today. And what costs will Australia’s next generation pay to carry and repay that debt? Crickets.

All Australia’s most important trading partners have now announced a target of net zero around mid-century. China is promising net zero by 2060. The others – including the US, Japan, South Korea, Britain, Germany, France, Canada, NZ – are aiming for 2050.

Morrison’s obduracy is even more bizarre when you realise that every state and territory in the Commonwealth has pledged to get to net zero by 2050. The real reason Morrison dare not break the taboo? Two words: Tony Abbott.

Recall that John Howard and Kevin Rudd reached a broad bipartisan agreement in 2007. They converged on the idea of an emissions trading scheme. This remained the consensus under Liberal leaders Brendan Nelson and Malcolm Turnbull. Until Abbott decided to break ranks, demonise the policy and lead a conservative insurrection against Turnbull.

Under the Abbott rule, it is illegitimate for politicians to commit to a carbon-cutting target. Even his own. As prime minister Abbott committed Australia to its Paris target. But once he’d been unseated by Turnbull, Abbott started campaigning against his own target.

That approach enabled him to bring down Turnbull, but also Julia Gillard. It was instrumental to his political successes.

It also was instrumental in Australia’s national failures. Today Australia has the highest electricity prices in the world, uncompetitive power-intensive industries such as aluminium, an electricity grid groaning under the strain of merely keeping the lights on during summer, and the oncoming collapse of a habitable planet.

No matter the need or the urgency. Morrison knows that to campaign openly, ambitiously, is to risk another conservative insurrection from his own Coalition. Instead he sticks to the safe ground of talking up new technology and more investment.

And then there’s Labor. The party’s spokesman on resources, Joel Fitzgibbon, had planned to announce his retirement from the opposition frontbench on December 7 under an internal deal in the NSW right faction. He decided to accelerate the plan and go out in a blaze of angry dissent instead.

Since last year’s federal election he’d made a point of talking up coal mining. There’s a lot of it in his NSW seat of Hunter Valley. He suffered a big swing against him at the 2019 election and blamed Labor’s climate activists for being disdainful of coal mining and Labor’s traditional blue-collar base.

An inconvenient fact? Two adjacent Labor-held seats, also heavy with coal mining, suffered much smaller swings at the same election. But rather than look within, Fitzgibbon chose to blame his party. He also relished the easy publicity that comes with attacking your own team.

When he saw the election of Joe Biden in the US, he fretted that this would animate Labor’s climate activism. On Monday he gave a half-dozen media interviews to try to head this off.

This frustrated his colleagues mightily. Anthony Albanese’s opening salvo against Scott Morrison in Monday’s question time was to point out that 70 countries including Biden’s America were committing to net-zero targets by 2050: “Why is the Prime Minister leaving Australia behind by refusing to?”

This was planned as a Labor theme for the week. Fitzgibbon’s high-profile dissent within Labor sabotaged that effort and opened Labor to attack from the government. And when Albanese chided Fitzgibbon at Monday evening’s shadow cabinet meeting, it erupted into an angry exchange. Without a discussion of the actual policy. Fitzgibbon resigned from the front bench the next morning. Three weeks early. He plans to continue his destabilising campaign of criticism.

Is he planning a tilt at the leadership? He doesn’t have leadership ambitions, which is just as well because he certainly doesn’t have the numbers. Most of his party is furious at his self-indulgence.

And he’d already told colleagues he wasn’t planning to contest the next election in any case. “He’s just striking a pose,” Albanese has told his colleagues. The working hypothesis is that he’s auditioning for a post-parliamentary job in the fossil fuels sector.

Once again, Labor is acting out the Abbott rule – Fitzgibbon by noisily campaigning against climate activism, and Labor as a whole by withholding its climate policy. Still shaken by its loss last year, Labor is postponing announcements of most of its policy plans across the board.

NSW announced a new $32 billion renewable energy investment plan this week. Woolworths committed to powering all its stores with solar. And Australia’s richest entrepreneur, Andrew Forrest, hatched a plan to make his company the world’s biggest renewable energy supplier. While in Canberra, government and opposition remain twitching in fearful spasms at the ghost of Tony Abbott. Pathetic but true.

Previous Criminal charges need to follow war crimes inquiry: experts
Next We need to talk about Kevin and Malcolm and their Murdoch obsession