Race-by-race preview and tips for Scone on Monday 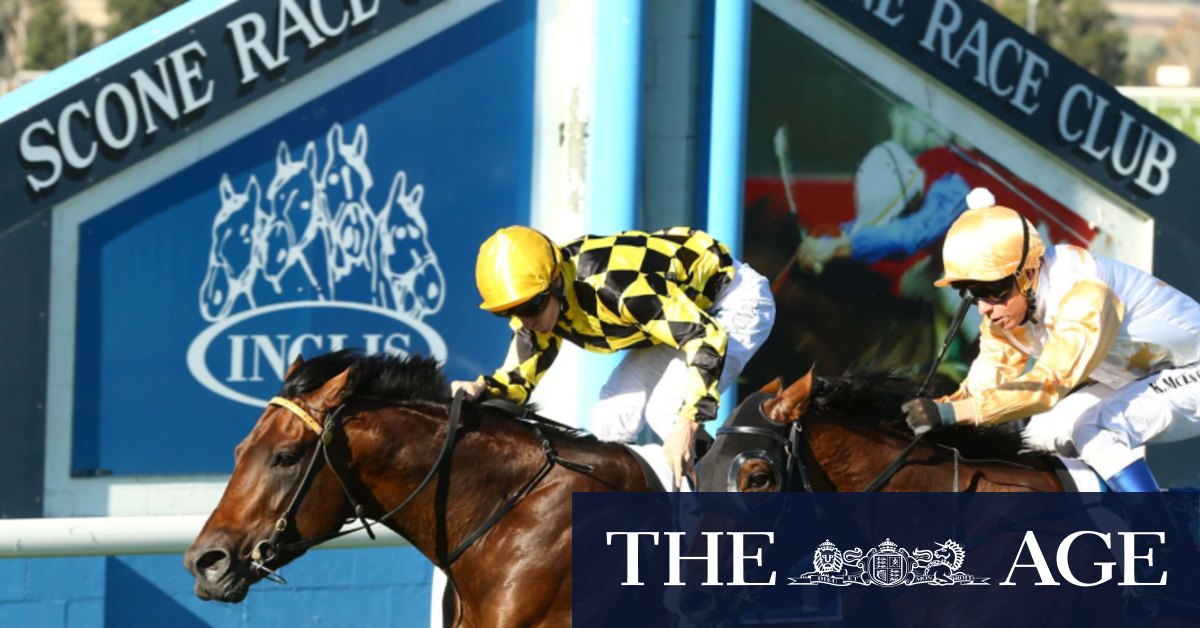 How to play it: Club Town to win
Odds and Evens: Split

Intriguing maiden. Love the value about Gosford mare 10. Pirrama who will appreciate the extra trip and big track after charging home to miss by a long head in a handy maiden third-up at Muswellbrook.

Dangers: Improving Newcastle filly and favourite 12. Always On Show is a natural threat third-up from an ideal draw. Worked home nicely after being ridden quieter last time at home and will also relish the sweeping track. Her progressive 3YO stablemate 5. Alastor has been behind only the winner in two runs this prep and gets in well at the weights after the young rider’s full claim. Local filly 13. Keen Contributor will find this more to her liking at the third start, and back on top of the ground after a fair effort in deeper company at Randwick.

Take two for the maidens and it’s an open affair. Improving Wyong 4YO 4. Oakfield Cherokee is primed to break through at his third start after making up plenty of ground in two runs at Muswellbrook. Trainer has tinkered with the gear, and this is his track.

Dangers: Big watch on 3YO 6. Freckle Rock who debuts for a strong metro stable off two quiet trials and with blinkers on. Local mare 9. Inducement is suited back home on the bigger track third-up.

How to play it: Oakfield Cherokee to win
Odds and Evens: Evens

Back to the sprint trip in what may prove to be a strong form maiden. Debutant local colt 3. The Wayfarer looks a good one in the making. Has natural early speed and has won both spaced trials comfortably. Regular stable rider takes 1.5kg off.

Dangers: Well-bred Muswellbrook filly 4. Miss Kojiki had little or no luck resuming here when well backed, and second-up last prep was less than four lengths running home behind ultra smart The Bopper. Home track 3YO 1. Ranuncula has been freshened up via a handy heavy track trial and hasn’t missed a place in three runs so far finishing hard from well off the speed, while another local filly 7. Baiyka resumes with no public trial and has ability but will need to harness all that early speed to get over from the outside barrier.

How to play it: The Wayfarer to win and quinella 3 and 4
Odds and Evens: Split

Good quality contest over the short course, and they’ll run some time. Smart local 4YO 4. Step On Fire has been given a month since a dominant first-up BM 58 win at Muswellbrook. A little tougher here but has natural speed and well treated at the weights after the claim.

Dangers: Newcastle mare 6. Pearl Roan is on the quick back-up and has a strong record on this track. Will slide over and likely sit just off the top selection. Be surprised if anything else wins, but include in exotics local mare 8. Talaaqy who can improve third-up with crucial gear changes.

How to play it: Step On Fire to win and quinella 4 and 6
Odds and Evens: Evens

Talented home-track four-year-old mare 4. Mother’s Mercy hasn’t started for nearly 11 months since an impressive debut win here. Recent trial was strong and she looks the one to beat, although anything well into odds-on appears under the mark.

Dangers: Got plenty of time for Newcastle mare 1. Leisa Louise who has been hard in the market and found the line well in two runs this prep. Blinkers have been added, and she gets a pivotal 3kg claim. Local 5YO 6. Now Or Never resumed with a strong closing effort at Muswellbrook despite being unwanted in betting but hasn’t fired a shot second-up so far. At bigger odds 7. Yulong Monoceros can drive into the finish after hitting the line in her last two, and she draws to get plenty of cover.

How to play it: Mother’s Mercy to win and quinella 1 and 4
Odds and Evens: Split

Now the boys’ edition. Progressive Wyong colt 5. Thailand can go back-to-back after an impressive and dominant win charging home at Muswellbrook at only his second start. By a Cox Plate winner, and will lap up the long stretch here.

Dangers: The last two runs from Newcastle stallion 3. Berruti have been fair since sweeping home to win on debut at Muswellbrook. Drawn to get a trail and 3kg allowance has him well placed at the weights. Local 5YO 1. Free Rider had been close-up all prep until dropping right out in a tougher Highway at Rosehill in heavy ground. All three wins have come on firm ground, but back up sharply in weight from a wide draw are big queries. Watch the betting on resuming Newcastle 5YO 4. Lucitor who hasn’t started for 10 months and comes in off two quiet trials.

How to play it: Thailand to win
Odds and Evens: Odds

We close the card with a competitive sprint. This looks a race in two, both having been scratched from Dubbo on Sunday to be saved for this. Talented Tamworth mare 1. The First Of May resumes for a third prep off a dynamic trial win at Gunnedah by seven lengths. Drawn well and supremely weighted after a 3kg claim.

Dangers: Smart local mare 3. Lady Patricia is the clear threat at her fourth start with blinkers going on. Bolted in at Muswellbrook two runs back before doing her best work late in a handy CL1. Gap to the rest headed by home track 6YO 5. Eleazar who is much better than his strike-rate suggests, and wasn’t far off Step On Fire last time under a bigger weight.

How to play it: The First Of May to win and quinella 1 and 3
Odds and Evens: Odds a special

Previous ‘Not a headbutt’: Melbourne boxer ‘robbed’ of world title in Las Vegas
Next One in every 323 Americans test positive to COVID-19 in a week