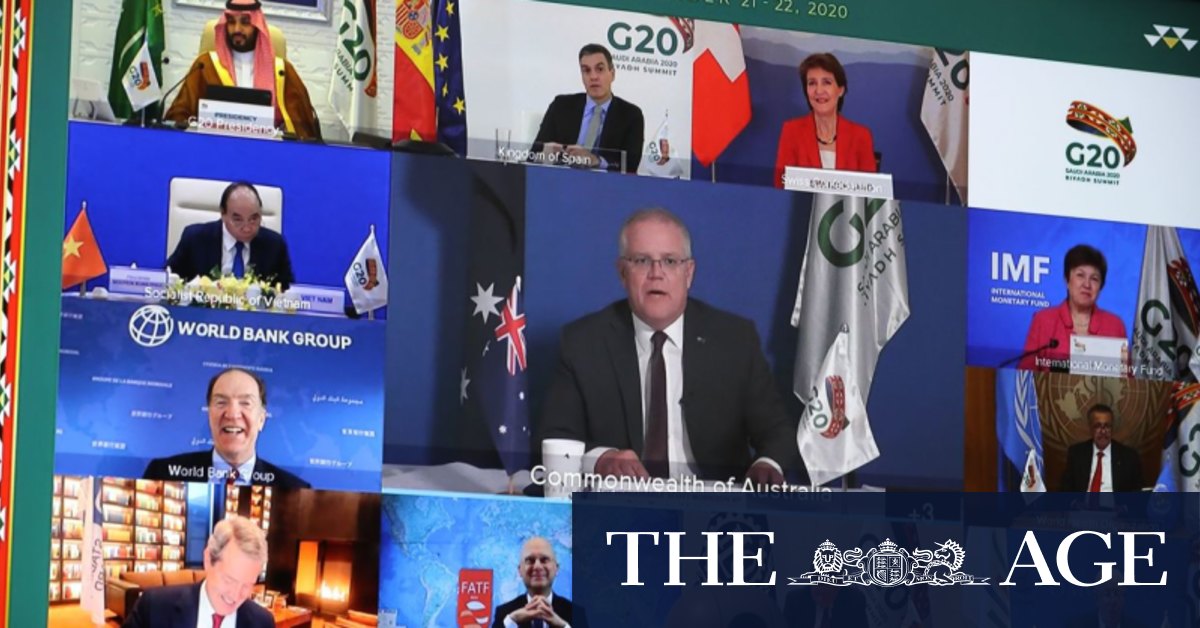 While most G20 leaders have already spoken directly with US President-elect Joe Biden, Mr Trump reportedly told the meeting: “It’s been a great honour to work with you, and I look forward to working with you again for a long time.”

A source with access to the virtual sessions, which were closed to media, reported Mr Trump had said that he had “done an absolutely incredible job during his term, economically and with the pandemic”.

After his moment in the virtual limelight, Mr Trump was substituted by Treasury Secretary Steven Mnuchin, while the other world leaders had their say.

Echoing a global message that “no one is safe until we are all safe”, Mr Morrison said the G20 had an important role in providing hope as the world worked to emerge from the pandemic and the recession.

The world’s 20 biggest economies have contributed more than $21 billion to combat the pandemic – which has infected 56 million people and left 1.3 million dead – and injected $11 trillion to “safeguard” the virus-battered world economy.

But the group’s leaders face mounting pressure to help stave off possible credit defaults across developing nations and to plug a $4.5-billion vaccine funding gap by increasing contributions to the COVAX Facility Advance Market Commitment.

“We will spare no effort to ensure affordable and equitable access for all people, consistent with members’ commitments to incentivise innovation,” the leaders said in the draft G20 statement.

“We recognise the role of extensive immunisation as a global public good.”

Leaders said a vaccine and treatment had to be safe, affordable and available to all, especially in developing countries, while Mr Morrison joined most other leaders to support extending debt relief for vulnerable countries.

The Prime Minister told the meeting Australia’s response had been relatively successful, both on suppressing the health impact and cushioning the economic impacts through unprecedented fiscal and monetary support.

He said with 75 per cent of jobs coming back, Australia was looking to build.

Saudi King Salman, the host, said although he was optimistic about the progress made in developing vaccines, therapeutics and diagnostics tools for COVID-19, the world’s leading economies must work to create the conditions for affordable and equitable access for all people.

Chinese President Xi Jinping spoke of the need to build a “global firewall against COVID-19” as he called on G20 nations to help distribute vaccines “fairly and efficiently”, according to state news agency Xinhua.

In a nod to the US-China trade conflict, there were also calls to resist protectionism, keep trade and supply chains open, and for a resumption of safe cross-border travel.