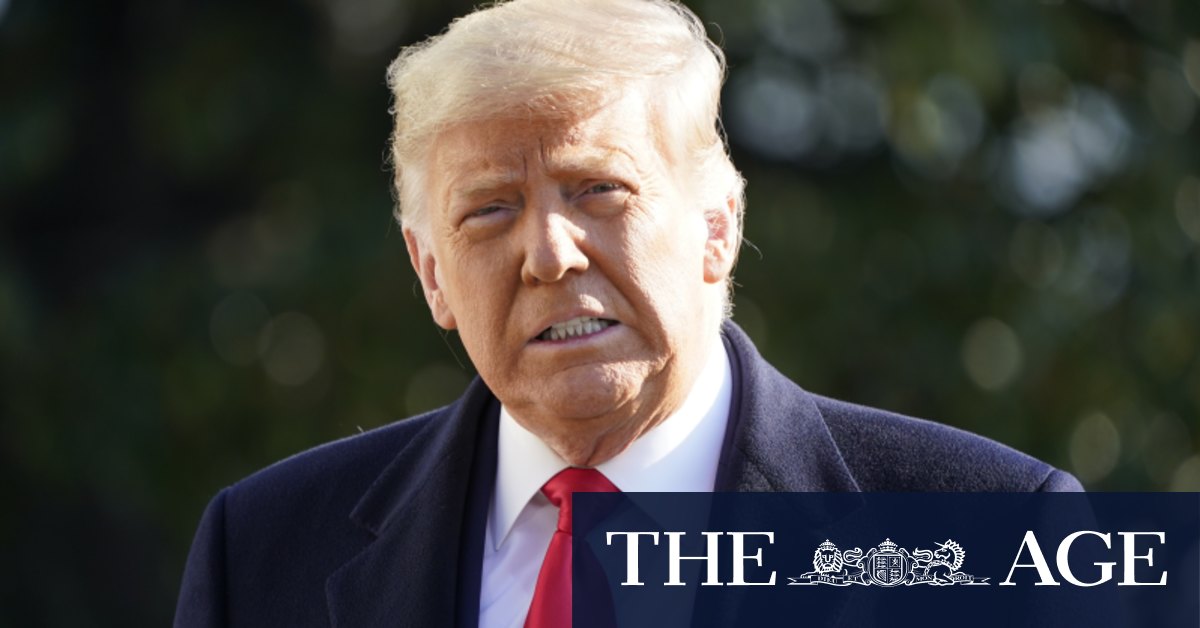 At the Save America rally, Trump urged his supporters to “fight much harder” for the victory he wanted.

“And Mike Pence is going to have to come through for us, and if he doesn’t, that will be a sad day for our country. Because you’re sworn to uphold our constitution.”

He encouraged his supporters to go to the Capitol.

“We are going to cheer on our brave senators and congressmen and women, and we are probably not going to be cheering so much for some of them — because you will never take back our country with weakness.”

These remarks have prompted the House Democrats to draw up articles of impeachment, arguing that the President’s words added up to “incitement of insurrection”.

Asked about the impeachment, Trump said it was “a really terrible thing that they’re doing”.

The President spoke as he left for Texas to survey the border wall with Mexico.

In Alamo, Texas, the site of the 725th kilometre of the border wall his administration is building, Trump brushed off Democratic calls on his cabinet to declare him unfit from office and remove him from power using the 25th Amendment.

“The 25th Amendment is of zero risk to me, but will come back to haunt Joe Biden and the Biden administration,” Trump said. “As the expression goes, be careful of what you wish for.”

YouTube has suspended US President Donald Trump from uploading new videos to his official account for at least a week, joining fellow social media giants Twitter and Facebook in shutting Trump out of his account because of concerns his posts will incite violence.

YouTube, the streaming video service owned by Google, said it removed new content uploaded to the President’s account for violating its policies and “in light of concerns about the ongoing potential for violence”.

Impeachment ahead, the House on Tuesday will first try to convince the Vice-President and cabinet to act even more quickly to remove Trump from office, warning he is a threat to democracy in the remaining days of his presidency.

House lawmakers reconvened at the Capitol for the first time since the deadly pro-Trump riot to approve a resolution calling on Vice-President Mike Pence to invoke the 25th Amendment to declare the President unable to serve. Pence is not expected to take any such action. The House would next move swiftly to impeach Trump.

Trump faces a single charge – “incitement of insurrection” – in the impeachment resolution that the House will begin debating on Wednesday, a week before Democrat Joe Biden is set to be inaugurated on January 20.

The unprecedented events, only the first US president to be twice impeached, are unfolding in a nation bracing for more unrest. The FBI has warned ominously of potential armed protests in Washington and many states by Trump loyalists ahead of Biden’s inauguration. In a dark foreshadowing, the Washington Monument was closed to the public and the inauguration ceremony on the west steps of the Capitol will be off limits to the public.

It all added up to stunning final moments for Trump’s presidency as Democrats and a growing number of Republicans declare he is unfit for office and could do more damage after inciting a mob that violently ransacked the US Capitol last Wednesday.

A Capitol police officer died from injuries suffered in the riot, and police shot a woman during the violence. Three others died in what authorities said were medical emergencies.

“We have to be very tough and very strong right now in defending the Constitution and democracy,” said Representative Jamie Raskin, an author of both pieces of legislation, in an interview.

“It is clear that every moment Trump remains in office, America is at risk,” said a statement from the caucus, led by Representative Raul Ruiz. It said Trump “must be held accountable” for his actions.

Democrats aren’t the only ones who say Trump needs to go.

Republican Liz Cheney encouraged House Republican colleagues late on Monday to “vote your conscience,” according to a person granted anonymity to discuss the private call. She has spoken critically of Trump’s actions but has not said publicly how she will vote.

Pence and Trump met late on Monday for the first time since the Capitol attack, and had a “good conversation” pledging to continue working for the remainder of their terms, said a senior administration official, who spoke on condition of anonymity to discuss the private meeting.

As security tightened, Biden said on Monday that he was “not afraid” of taking the oath of office outside at the Capitol.

As for the rioters, Biden said: “It is critically important that there’ll be a real serious focus on holding those folks who engaged in sedition and threatening the lives, defacing public property, caused great damage – that they be held accountable.”

Biden said he’d had conversations with senators ahead of a possible impeachment trial, which some have worried would cloud the opening days of his administration.

Senate Democratic leader Chuck Schumer was exploring ways to immediately convene the Senate for the trial as soon as the House acts, though Republican leader Mitch McConnell would need to agree. The President-elect suggested splitting the Senate’s time, perhaps “go a half day on dealing with impeachment, a half day on getting my people nominated and confirmed in the Senate, as well as moving on the package” for more COVID relief.

As Congress resumes, an uneasiness swept government. Another lawmaker, Representative Pramila Jayapal, a Democrat, announced on Tuesday that she had tested positive for COVID-19 after sheltering during the siege.

Many lawmakers may choose to vote by proxy rather than come to Washington, a process that was put in place last year to limit the health risks of travel.

House Republican leader Kevin McCarthy has discouraged Republican lawmakers from using the proxy option. But during a call with them he loosened his strict opposition for this week’s votes, according to a Republican granted anonymity to discuss the private call.

Among Trump’s closest allies in Congress, McCarthy said in a letter to colleagues that “impeachment at this time would have the opposite effect of bringing our country together”.

He said he would review possible censure of the president. But House Republicans are split and a few may vote to impeach.

Democrats say they have the votes for impeachment. The impeachment bill from Representatives David Cicilline of Rhode Island, Ted Lieu of California, Raskin of Maryland and Jerrold Nadler of New York draws from Trump’s own false statements about his election defeat to Biden.

Judges across the country, including some nominated by Trump, have repeatedly dismissed cases challenging the election results, and former Attorney-General William Barr, a Trump ally, has said there was no sign of widespread fraud.

The impeachment legislation also details Trump’s pressure on state officials in Georgia to “find” him more votes, as well as his White House rally ahead of the Capitol siege, in which he encouraged thousands of supporters last Wednesday to “fight like hell” and march to the building.

The mob overpowered police, broke through security lines and windows and rampaged through the Capitol, forcing lawmakers to scatter as they were finalising Biden’s victory over Trump in the Electoral College.

While some have questioned impeaching the President so close to the end of his term, Democrats and others argue he must be prevented from holding future public office.

There is precedent for pursuing impeachment after an official leaves office. In 1876, during the Ulysses Grant administration, War Secretary William Belknap was impeached by the House the day he resigned, and the Senate convened a trial months later. He was acquitted.