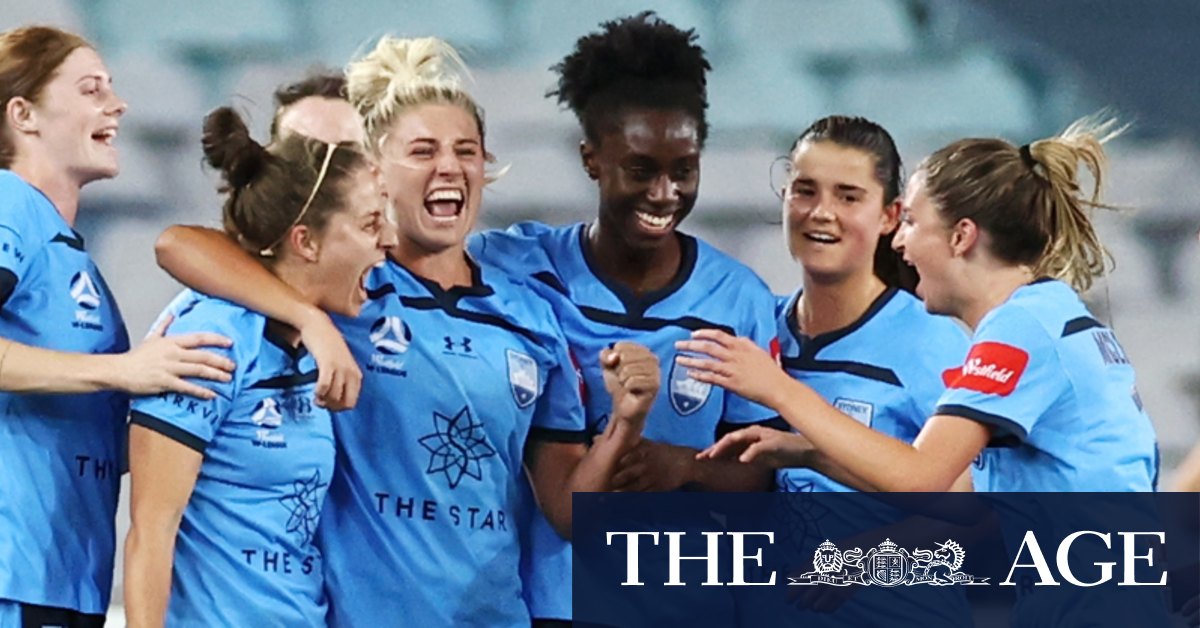 Competition chiefs were hopeful that a strong crowd would be on hand for the occasion, with kick-off coming just 40 minutes after the A-League derby fixture at Stadium Australia had wrapped up.

The vast majority of the 14,000 fans who watched the men, however, cleared out, but the thousand or so who stuck around were rewarded with an open, entertaining clash.

After a relatively even first half-hour, the Sky Blues took the lead in the 31st minute after Ibini was crudely taken down by Danika Matos after embarking on a mazy run into the penalty box.

Mackenzie Hawkesby stepped up and sent Courtney Nevin the wrong way to put Sydney ahead and the goal seemed to spark them into action.

They could have easily gone into the sheds 3-0 up or more, with star striker Remy Siemsen and Hawkesby remarkably hitting the woodwork within the same passage of play in the 40th minute.

Then, two minutes from the break, a clever through ball from Charlotte McLean put Siemsen one on one with Nevin, only for the Matildas hopeful to drag her shot wide of the mark.

While Sydney weren’t converting their chances, the Wanderers were at sixes and sevens defensively, and to make matters worse they lost skipper Caitlin Cooper to a suspected concussion after she copped the full force of a Cortnee Vine shot flush to the face in the dying moments of the opening half.

It was more of the same in the second stanza. Siemsen again went agonisingly close to opening her account for the season in the 65th minute, but Nikola Orgill stretched her leg out in desperation and somehow managed to clear her effort off the line.

Moments later, Sydney’s advantage was finally doubled as Nevin tried and failed to bat away a corner from Polias that angled dangerously close to the line. The ball fell to Brush, who was lurking at the back post and was on the spot to tuck away the finish before wheeling away in a lively celebration.

Wanderers could muster little in response, leaving coach Dean Heffernan’s side with two losses and a win from their first three games and plenty of work ahead of them if they are to crack the finals series for just the second time in club history.