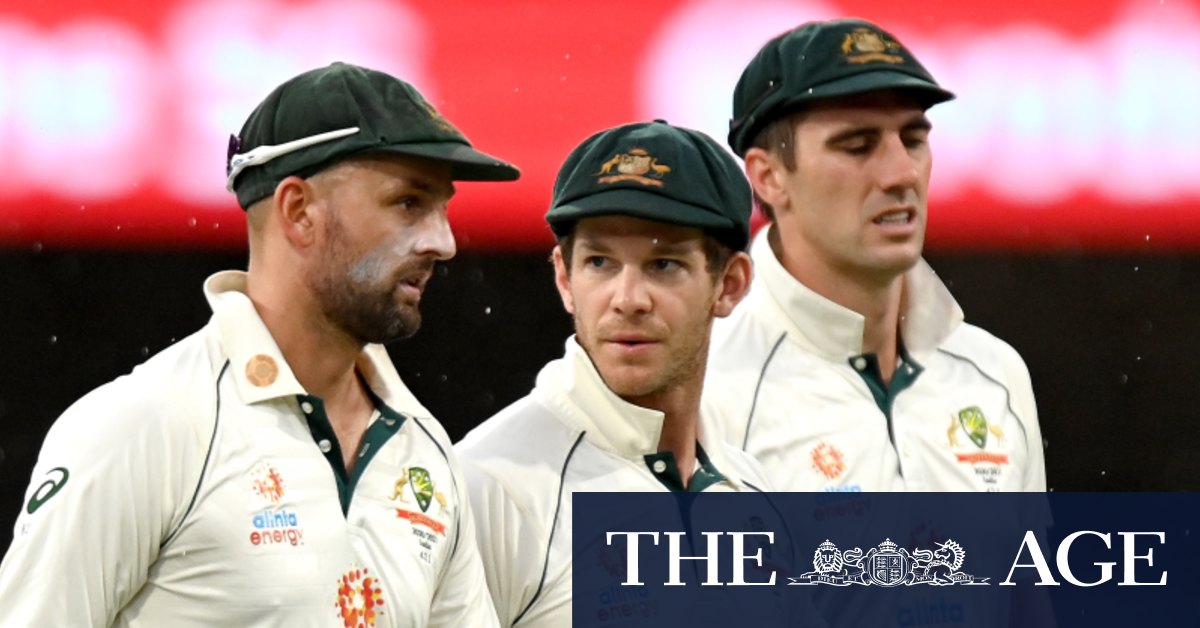 India, set an ambitious 328 to achieve victory, don’t need to go for it to retain the silverware and could hang on for a draw like they ultimately did in Sydney. But you suspect that with the adventurous Rohit Sharma and Rishabh Pant in their ranks, Ajinkya Rahane and his fearless fill-ins might just give it a whirl.

If Starc is restricted or unable to bowl, having reached for his leg in discomfort after bowling one over on Monday night, it won’t do Australia any favours.

“He was grabbing at his right hamstring, I think it was,” Steve Smith said. “I’m sure he’ll get it assessed. But one thing I know about Mitchell is he’s tough and he’s played through some injuries before so he’ll be good to go hopefully tomorrow.”

Another factor is the heavens. Paine refrained from declaring late on the fourth day with the outlook from above improving for Tuesday. But as Australia began the best part of four sessions to bowl out their opponents, there was a setback as a downpour robbed them of 80 minutes at India under lights.

In the end, they managed only 11 balls before play was suspended and then abandoned with India 0-4, 323 runs behind.

“We’re certainly not weather men and don’t know that it’s coming, so you have to play the game as you see it,” Smith said.

‘Tomorrow it’s just going to be about bowling good areas … hopefully we can hold onto all the chances.’

“I think the game is in a nice place for us. The wicket started to play a few tricks today. A couple of balls shot up, so tomorrow it’s just going to be about bowling good areas … hopefully we can hold onto all the chances.”

The record for a successful fourth-innings chase at the Gabba is 7-236, achieved by Australia against the West Indies in 1951.

But more than half of Paine’s side only have to cast their minds back five years to recall Pakistan managing 450 with a pink ball in Brisbane, giving them an almighty last-day scare before falling 39 runs short of Australia.

As they contemplate the fifth day, Australia’s fast bowlers will have liked the sight of deliveries spitting off the pitch from the outstanding Mohammed Siraj on Monday, who along with Shardul Thakur collected all but one of the second innings wickets.

The penultimate day of the series was another seesawing affair.

As has been the case for most of the summer, just when a dominant narrative seemed to emerge, a twist would demand an urgent rewrite.

David Warner and Marcus Harris got their team off to a flyer but, in the space of 36 balls, Australia lost 4-34. Smith set the hosts back on track with a hastily made half-century. Just as he was taking off, a ball from Siraj jumped off the pitch, blew his glove off the handle and flew to Rahane in the slips.

When showers briefly stopped play in the afternoon, Australia’s lead was 276, not quite the position of authority they might have assumed had the day gone fully to plan.

But while the colour-by-numbers weather radar presented a worrying outlook, only an over was lost as tea was called with the covers on.

Paine and coach Justin Langer were locked in conversation throughout the interval, weighing up their next move. Some, like former captain Allan Border, thought they had enough, but when the rain eased Australia came out for another swing.

Amid cameos from Pat Cummins and Nathan Lyon, Paine continued to resist the declaration dangling before him until there was no decision to make, with Siraj’s fifth wicket ending their second dig at 294.

It brought about the final act of an unforgettable series, with Australia’s bowlers back on centre stage. Time is in short supply but there is long enough if they are good enough.

Previous ‘It got totally out of control’: the pigeon that won hearts globally
Next Australia counts the bird in the hand