‘It’s no time to be protesting’: Andrews tells Victorians to stay away from Invasion Day rallies

admin January 21, 2021 Victoria News Comments Off on ‘It’s no time to be protesting’: Andrews tells Victorians to stay away from Invasion Day rallies 13 Views 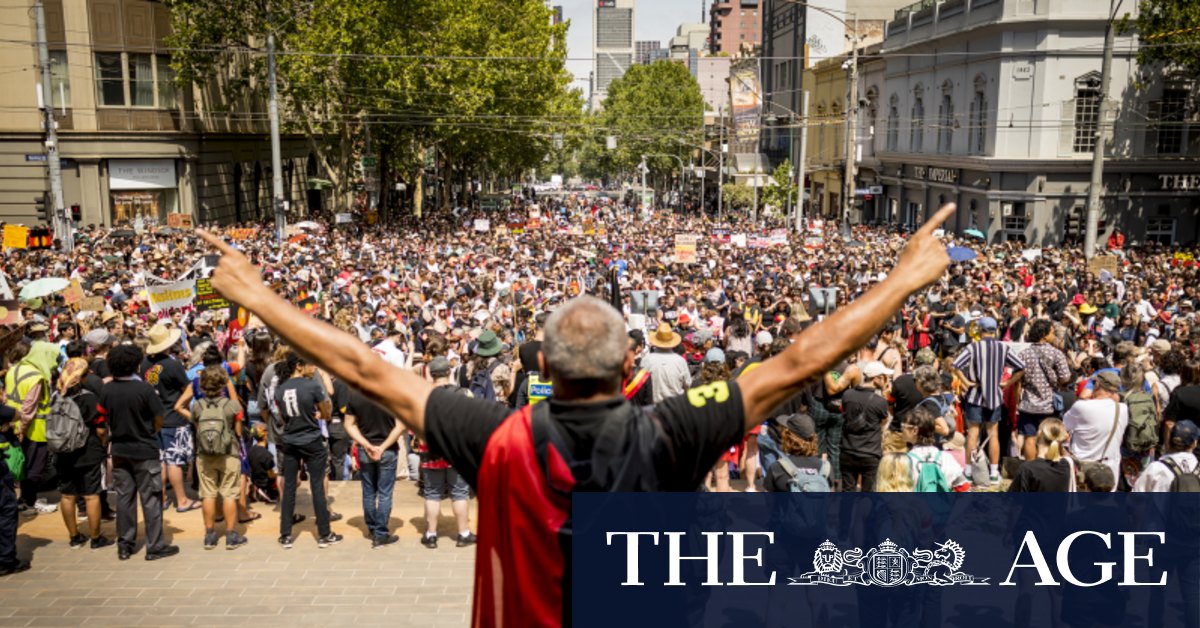 Tens of thousands of people have marched through Melbourne’s CBD in recent years to mark the impact of colonisation on Aboriginal and Torres Strait Islander people, calling for Australia Day to be abolished, or that it not be celebrated on the anniversary of the arrival of the First Fleet in 1788.

Mr Andrews said on Thursday now was not the time for protests. “This will be a different Australia Day; we’re in the midst of a global pandemic,” he said.

“It’s no time to be protesting, it just isn’t. We’ve built something precious and unique, Victorians have, through their sacrifice and their commitment and their compassion for each other and we have to safeguard that.”

The protest has previously coincided with Melbourne’s official Australia Day parade in the city, and has attracted counter-demonstrations from far-right groups. The official parade has been cancelled this year because of the virus.

Senator Thorpe said the Premier “cannot dictate to us what we do when we are fighting for our basic human rights. We will listen to the advice of the medical people.”

Hand sanitiser would be available and groups would be encouraged to distance from one another, she said.

The Premier made similar comments before last year’s Black Lives Matter rallies, when tens of thousands of anti-racism protesters defied COVID-19 health warnings to take to the streets as Melbourne’s second wave of COVID-19 cases grew.

Three organisers of the Melbourne event, which passed without any arrests amid a heavy police presence, were each fined $1652 for breaching coronavirus restrictions.

“I can understand people wanting to protest and we have to remember we are allowing other events to go ahead, like the Australian Open, when there is safety involved,” he said.

“If we take all the best possible precautions, like having a limited number at a limited time, ensuring people wear face masks, use hand gel, social distance, this all minimises the risk.”

Professor Booy said there must be consultation between police, public health officials and the people leading the protest “so that it’s all done smoothly”.

“Given the direction we’re heading, with low transmission rates in the community and with high observance of appropriate precautions, the smoothest path may well be to allow protests within appropriate bounds,” he said.

University of South Australia epidemiologist Adrian Esterman said that despite Victoria recording a 15-day run of no locally acquired cases on Thursday, the risk of undetected transmission of the virus still lingered in Melbourne. However, he believed the protest could be held safely.

“There is risk in holding this protest, but it is quite minimal,” he said.

“If there was community transmission circulating in Melbourne, I would say it should absolutely not go ahead, but at the moment it is fairly safe as long as there is no outbreaks between then and now.”

The former World Health Organisation adviser said face masks should be mandated at the rally.

La Trobe University epidemiologist Hassan Vally said the protest posed a dilemma because it was a situation where public health was colliding with an emotionally charged social issue.

“If you put your public health blinkers on and detach yourself from the emotion of it, from a scientific perspective we know that having large groups of people together is not consistent with everything that we’ve done over the past 12 months to protect people,” Professor Vally said.

“On the other side of this, it is understanding that people strongly believe that these issues transcend everything else that’s going on and they see it as vitally important to have their voices heard.”

Professor Vally urged Victorians to consider other ways they could protest on January 26.

He said Victoria had seen first-hand how quickly the virus could spread and it was paramount if people attended the rally they followed public health advice such as social distancing, wearing a face masks and maintaining hand hygiene.

“If there was one time in a generation that we should possibly try and protest in other ways, then this would be it,” Professor Vally said.

“The worst-case scenario is that there is a super-spreader in a huge crowd who could infect a lot of people that will all go back to different areas of Melbourne, and two weeks later we will have hundreds or thousands of cases. That’s our biggest fear.”

One person in hotel quarantine had tested positive, the state government said on Thursday.

A Victorian Department of Health and Human Services spokeswoman said current COVIDSafe Summer restrictions outline that up to 100 people can meet outdoors in a public place.

“We are still in the middle of a pandemic and mass gatherings can create risks for all Victorians, particularly those in vulnerable groups,” she said.

“The department strongly recommends whenever you cannot keep 1.5 metres distance from others you wear a face mask. If you have any COVID-19 symptoms don’t attend any public sites and immediately seek testing.”

Loading Most teachers recognised that bullying involves an intent to harm and repetition, but just …