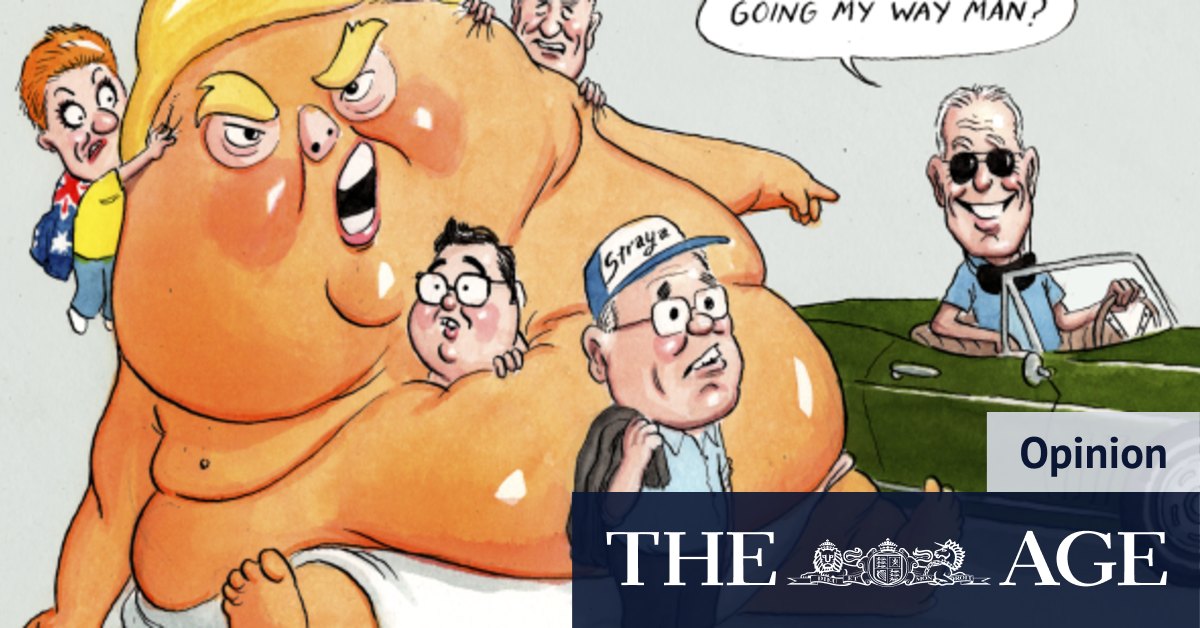 In a country with 250 million adults, that suggests more than 80 million still buy the lie. Among Republican voters, nearly two-thirds – 64 per cent – believe so. Six per cent of Democrats believe it too.

Many political operatives and politicians around the world will see this not as a terrible aberration but as an exciting test run. That includes some elected members of Parliament in Australia who continue to broadcast the Trump alternative reality, the fiction that threw US democracy into acute crisis and remains a danger even after Trump’s departure.

The unnamed Bush staffer explained the concept to the reporter Ron Susskind, who published it in The New York Times Magazine in 2004. The reality-based community comprised people who “believe that solutions emerge from your judicious study of discernible reality … We’re an empire now, and when we act, we create our own reality. And while you’re studying that reality – judiciously, as you will – we’ll act again, creating other new realities, which you can study too, and that’s how things will sort out. We’re history’s actors … and you, all of you, will be left to just study what we do.”

Susskind’s report of these remarks has since been described as an “intellectual scoop”. And the Bush operative’s words apply today – the reality-based community is left stunned, agape, to study the extraordinary power of Trump’s alternative reality. Or what the Chinese Communist Party would call his “discourse control”.

The concept worked temporarily for Bush, long enough to get him re-elected. In that case, the alternative reality was that the US-led invasion of Iraq was justified, necessary and successful. All false, and ultimately all seen to be false. But at the time Bush and his vice-president, Dick Cheney, were strikingly successful in misleading their nation.

And they managed to do it without the help of so-called social media, truly an Orwellian misnomenclature for one of the most socially divisive forces in contemporary civilisation. Bush had already been re-elected by the time Facebook and Twitter launched operations.

Yet Bush had a much easier sell. He had to persuade an America unsettled by the 9/11 attacks that it was cool to invade a faraway Arab country that most Americans already considered a hostile state. He merely had to conflate Iraq’s Saddam Hussein with Al Qaeda’s Osama bin Laden and muddy the waters a bit to win public support for his big lie. Mission accomplished.

Trump had the advantage of fully fledged anti-social media to work with. Critically, he also had the advantage of another decade of American failure on his side – shocking inequalities of wealth and opportunity, failing wars fought with the lives and limbs of the American underclass, a paralysing opioid plague, ever-deepening cultural divides and racial resentments.

The conditions for the rise of an authoritarian were ripe. A couple of centuries of American democracy are feeble defence against these historical forces for human discontent. Indeed, the American historians Will and Ariel Durant predicted as much more than half a century ago. They distilled the threefold warning that emerged from their 11-volume survey, The Story of Civilisation. Even though they were writing in 1968, at a time when democracy was “sounder than ever before”, as they describe it in their overview essay titled The Lessons of History.

One: “If race or class war divides us into hostile camps, changing political arguments into blind hate, one side or the other may overturn the hustings with the rule of the sword.”

Two: “If our economy of freedom fails to distribute wealth as ably as it has created it, the road to dictatorship will be open to any man who can persuasively promise security to all.”

Three: “If a war continues to absorb and dominate [a democracy], or if the itch to rule the world requires a large military establishment and appropriation, the freedoms of democracy may one by one succumb to the discipline of arms and strife.”

The Durants didn’t posit that you needed all three – or even two – of these conditions to overturn a democracy. Any one might suffice. And in America, the first two preconditions were present for Trump to exploit. And arguably some elements of the third as well.

Trump exploited these crises by decrying them as “American carnage” and promising populist solutions. Populism has many definitions; the one I prefer is a political style offering unworkably simplistic solutions to complex problems.

One. Fix the race problem by shutting out Muslims and Mexicans and encouraging white supremacists. This only inflamed the hate, which Trump then sought to own and direct.

Two. Fix the economy by blaming China and others for problems, putting tariffs on imports and handing out tax cuts. This only aggravated inequality and stoked the national debt, while Trump & Family profited personally.

Three. Fix the “forever wars” by dismissing America’s commitments to US allies and “bringing all the troops home”. This did offer the prospect of relief to overworked troops, but weakened the Western alliance and encouraged Vladimir Putin in the process.

And when circumstance delivered a pandemic, he produced a populist response to that, too. Blame China for inflicting it, and the Democrats and media for perpetuating it.

The power of Trump’s achievement in overcoming reality was a marvel of manipulation. He knew exactly what he was doing. From the first. Remember his easy dismissal of inconvenient information as “fake news”. And, challenged by reporters in the act of making things up, he gave a pathbreaking attribution to authoritative sourcing: “All I know is what’s on the internet.” Which, of course, is everything and nothing.

When he was inaugurated, his spokeswoman Kellyanne Conway defended Trump’s exaggerated claims of the number of adoring fans who’d supposedly turned out in support. The administration had simply presented “alternative facts”, she said. This caused a stir at the time, yet now looks innocent compared with the monstrosity of Trump’s perversions of pandemic reality – that it would just “go away” like “a miracle” while 400,000 Americans died in the meantime.

And to the last. In his efforts to overturn Joe Biden’s election win, Trump was fully conscious of reality but orchestrated the alternative reality he wanted America to swallow. Some of his cynical manipulations were recorded by the former Sydney Morning Herald reporter Jonathan Swan this week for Axios.

“President Trump was sitting in the Oval Office one day in late November when a call came in from lawyer Sidney Powell. ‘Ugh, Sidney,’ he told the staff in the room before he picked up. ‘She’s getting a little crazy, isn’t she? She’s really gotta tone it down. No one believes this stuff. It’s just too much.’

“He put the call on speakerphone for the benefit of his audience. Powell was raving about a national security crisis involving the Iranians flipping votes in battleground states. Trump pressed mute and laughed mockingly.”

Powell, a former government attorney, filed four law suits in efforts to overturn the election result. It was clear that Trump recognised how unhinged his outside legal advisers were, wrote Swan: “But Trump promoted Powell as part of his team. ‘Sometimes you need a little crazy,’ Trump told one official.”

At the outset of his prime ministership Scott Morrison flirted with Trumpist populism. Remember his proposal to mimic Trump by moving the embassy from Tel Aviv to Jerusalem? His whack at “negative globalism”? His sharing the stage with Trump at a political event in Ohio?

Gratefully, Morrison abandoned this dangerous flirtation. And, after his searing damnation for failing to respond to Australia’s season of fire, he reformed. When the pandemic struck, Morrison responded as a full member of the “reality-based community”.

Not everyone in his coalition got the message. The Liberals’ Craig Kelly and Nationals’ George Christensen thought it clever politics to ape Trump rhetoric on a number of subjects. Even the Nationals’ leader, Michael McCormack, continues to think he’s on a winner in persisting with some Trump talking points. Even as acting prime minister of Australia he failed in his responsibility to understand that he should serve Australian reality rather than Trumpist fantasy. These characters embarrass themselves and demean Australia’s government.

Morrison’s next turn to reality is to better align Australian climate and energy policy with the political reality of a Biden administration and the planetary and economic realities of accelerating climate change.

It might be too late for US politics to return to the reality-based community in any lasting way. Biden will try his best. But the stunning inequality and deep divisions in America have not left with Trump but remain as inflammatory preconditions for cynical exploitation. That’s just the reality.