Breaking News
Home / Latest News / The Trump era is over, not with a bang but with an elegant troll

The Trump era is over, not with a bang but with an elegant troll

admin January 23, 2021 Latest News Comments Off on The Trump era is over, not with a bang but with an elegant troll 15 Views 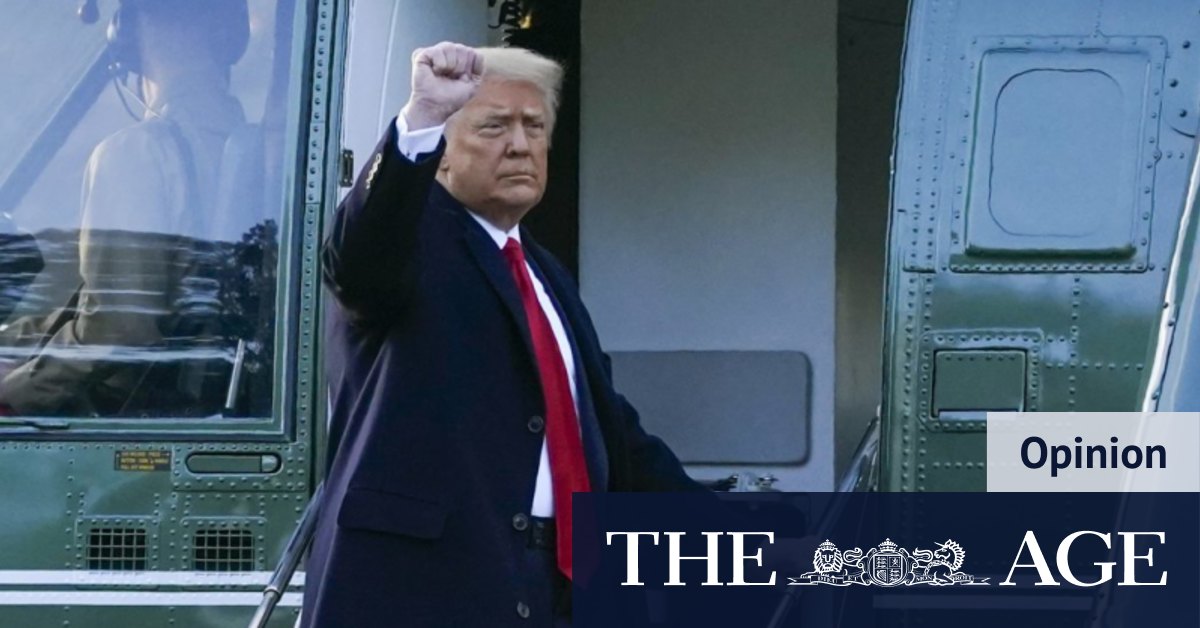 Anti-Trump intellectuals reacted with a gratifying mixture of horror and bafflement to the 45th president’s decision to commemorate Arendt. It seems unlikely that the former president has spent a great deal of time contemplating her extensive writings; indeed, most people doubt that he reads much at all. But someone in his camp must be familiar with her works, which suggest that someone in Team Trump is having a laugh – and perhaps also making a serious point.

When the 45th president was elected, Jezebel reported that Arendt’s 1951 opus on The Origins of Totalitarianism sold out on Amazon. Columnists and essayists thumbed the 600-odd pages of Origins for definitive wisdom on the techniques of totalitarians, or at least placed it portentously on their lounge room shelves.

Shortly after Trump’s inauguration, UK Guardian columnist Zoe Williams, noting the spike in references to Arendt and demand for Origins quoted a summary of Arendt’s thought by Dr Griselda Pollock: ”talks of the creation of pan movements, these widespread ideas that overarch national, political and ethnic elements – the two big pan movements she talks about are bolshevism and nazism. There is a single explanation for everything, and before the single explanation, everything else falls away. She gives a portrait of how you produce these isolated people, who then become susceptible to pan ideologies, which give them a place in something. But the place they have is ultimately sacrificial; they don’t count for anything; all that counts is the big idea.”

Williams concluded happily that the left ”isn’t necessarily unequal to the task of creating a pan-ideology” because ”anyone who believed in pluralism or complexity would have no currency on this terrain”. Moreover, ”we – the left – should be glad not to have been effective in this space, even if it feels like a failure”.

Victims of left-wing complexity and pluralism would beg to differ. Would that be the pluralism displayed by left-wing call-out culture? Or, as Jon Ronson refers to it in his much read and greatly ignored 2015 book So You’ve Been Publicly Shamed, the “great renaissance of public shaming” formerly phased out in the late 1840s.

Would it be the complexity of the Trump “Resistance”, which dismisses millions of Americans as rednecks and racists, captured by a Big Lie? The truth is, anyone who isn’t even a little concerned about a “pan-ideology” on their side of politics hasn’t been paying attention for the last several years.

It takes at least two sides to wage what US President Joe Biden referred to in his inaugural address as an “uncivil war”. Even as he celebrated the inauguration of the 46th president, New York Times columnist Charles M Blow fretted that Trump ”has shown the next presidential hopeful with authoritarian tendencies that authoritarianism can gain a foothold here”.

True; and there is no knowing which side will find that foothold. Both the left and the right are getting quite
adept at the techniques of authoritarianism which Arendt describes.

Anyone who has been earnestly thumbing Arendt’s work to weaponise her quotes has made a fool of themselves if they missed that she most feared ideological stridency, regardless of its intellectual justifications.

Trumpist fake news has its equal in the discredited conspiracy theory of Russiagate.Trump demanded that his team show loyalty by repeating his versions of events – his “alternative facts” – even when they contradicted reality. For their part, progressives have an entire lexicon of terminology which must be adhered to, along with alternative personal pronouns. Slip up and you’ll get a taste of complexity and plurality.

And herein lies the genius of the Arendt statue troll: Trump is gone, but behind the centrist Biden is a party of ideologues proposing to purge Trump “collaborators”, including his civilian supporters.

Hannah Arendt’s graven image will watch as the next few years unfold; a sobering reminder for those who care to think about what she might have thought.