admin January 27, 2021 Business Comments Off on Trade the GameStop short squeeze if you wish – but it’s very stupid 11 Views 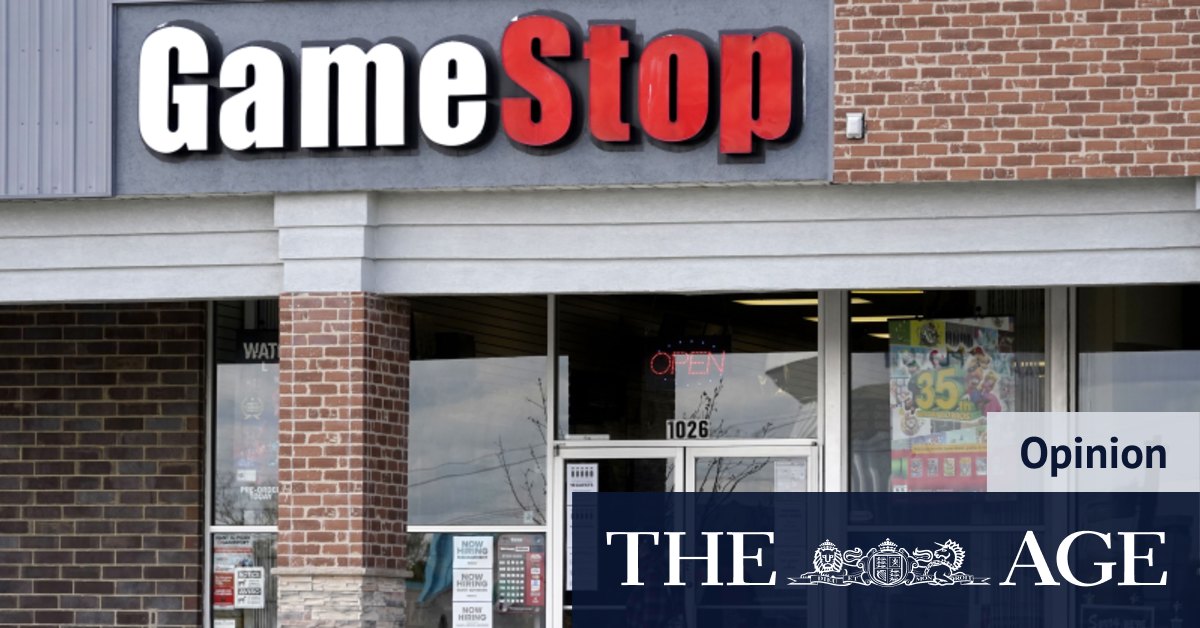 This action has produced massive losses among short sellers, who thought GameStop was an OK stock to short a year ago.

Among the biggest losers is the hedge fund Melvin Capital Management, which is headed by a very well-known Wall Street star. Melvin’s reported losses on GameStop and other misplayed short bets forced it to seek a nearly $3-billion bailout from two other hedge funds this week.

On the Reddit forum WallStreetBets and among other small investors posting online, the glee is palpable. “You guys are making such an impact that these fat cats are worried that they have to get up and put in work to earn a living,” a moderator of the forum posted a few days ago.

All this trading in a company that hasn’t turned a profit since 2017 and is vulnerable to the pandemic’s effect on brick-and-mortar retailing, as well as the shift in game buying from physical discs to downloads, has investment experts wondering what the hell is going on here. More to the point – where’s it ending?

Among the skeptics is Andrew Left, a prominent short seller who issued a negative analysis of GameStop via YouTube on Jan. 21 and has been so pummeled by abusive online investors since that he canceled a plan to hold an interactive discussion about the stock. At the time of his analysis, GameStop was trading in the $40s; he predicted that it would eventually fall back to $20.

It’s unclear, he said, whether GameStop will follow the path of JCPenney, which benefited from a moment of optimism but has since sought bankruptcy protection, or Blockbuster Video, which got swamped by technological change.

“You just can’t change a bad retailer,” he said.

In truth, short selling is not only proper, but essential for the smooth functioning of the financial markets.

A quick primer on short selling is perhaps in order here.

Short sellers honor the Wall Street mantra to buy low and sell high, but they do so in reverse order. First, they sell high, by borrowing stock from shareholders and selling it. Second, they buy low, by picking up shares at a lower price and returning them to the lenders.

Obviously, for this method to work, the shares must decline in price. That’s what short sellers are betting on. So they’re constantly searching for companies that are overvalued, whether because their business models have flaws unsuspected by investors, or they’re havens for fraud (think Enron), or any other reason.

This makes shorts very unpopular among corporate managements, which prefer that the investment community focus on their upside and swallow their optimistic press releases uncritically, rather than pointing out the downside.

Some executives get downright childish about it, such as Elon Musk, who revels in how shares in his Tesla electric car company have remained buoyant despite short sellers pointing out that it hasn’t actually made money from selling cars, only by trading auto emission credits.

Musk and other executives love to portray short selling as almost un-American.

I’ve taken it upon myself to defend them on numerous occasions, including back in 2014 when a respected Washington financial columnist joined a biotech company named Northwest Biotherapeutics in accusing, without a shred of evidence, a very good financial writer of conniving with short sellers to drive the company down.

Northwest was trading above $5 a share then; it’s now at $1.40 and its future was still in doubt a few months ago, so the short sellers were right to be skeptical.

In truth, short selling is not only proper, but essential for the smooth functioning of the financial markets. As I’ve explained it before, although corporate managements believe that unalloyed investor optimism is nirvana, it’s unhealthy for capitalism, just as living on a diet exclusively of Twinkies would be for human beings.

Short sellers counteract this tendency. Shorts sounded early alarms about Enron and many other companies destined for collapse in ways that the investment world didn’t expect. Without shorts, not a few frauds would have continued, costing investors millions more than they did.

That said, short selling is an expensive and risky strategy. For one thing, when a company declares a dividend, they don’t pocket the money, but have to pay it out (to shareholders who lent their stock). They typically leverage their bets with borrowed money, so their interest costs can be high. All this can put time pressure on short sellers, so they can’t always hold their positions indefinitely.

Most importantly, their gains are capped and their potential losses are infinite. This is the reverse of the risk profile of long investors, who buy and hold shares. If you buy a stock for $20 and it falls to zero, you can’t lose more than $20; but your potential gains are unlimited if the stock keeps rising.

If you’ve shorted a stock at $20, your potential gain is $20, again if it goes to zero. (You sold at $20, and you’re buying it back, or “covering,” at zero.) But if the shares keep rising, your potential loss is unlimited.

This is the phenomenon behind the GameStop action. It’s known as a short squeeze. The stock bulls higher, eventually surpassing the capacity of the shorts to remain short. They bail out by covering – that is, buying – at a higher price, swallowing their losses. Their buying action pushes the stock even higher, forcing more shorts to cover, until finally all the short sellers are swept out.

The promoters of GameStop shares claim they have a good bullish case. It starts with Ryan Cohen, co-founder of the online pet supply merchant Chewy, who disclosed a sizable position in GameStop in August at about $8.45 per share. Early this month, Cohen was added to the GameStop board, fueling the latest frenzy.

The idea is that Cohen will mastermind a transformation of GameStop into an online powerhouse. But a few caveats are proper. First, the stock run-up is based less on a fundamental case for the company’s future growth, but on a short-term case built around Wall Street trading patterns.

As Left pointed out, the same management that presided over GameStop’s decline into the retail doghouse are still in charge; most took their seats in mid-2019. Maybe Cohen will sweep them out, maybe not. But whether he can steer GameStop to a new course – and whether that course will work – is hardly a slam dunk.

Moreover, even if one believes Cohen will work magic with GameStop, its current price is way out of line. At its current trade, its ratio of price to expected earnings for the next year is well beyond those of Apple and Walmart.

By the way, while GameStop reported on Jan. 11 that holiday sales were up 4.8% in its brick-and-mortar stores compared with a year ago, and online sales increased by 300%, online sales still accounted for only about one-third of all sales. Total sales were down 3.8%, the company said, largely because it has been closing stores.

Should you jump into GameStop? Far be it from me to issue investment advice. But price spikes can hit you where it hurts. If you bought along with Ryan Cohen in mid-2020, you’ve done great. If you were one of the buyers who pegged the shares at $159 on Monday, you were crushed when they closed that day at $76.79.

A short squeeze that can take a stock into the stratosphere can last longer than anyone expects, but they’re not usually based on long-term expectations.

So, if you want to play, have fun. You don’t have to shed tears for the short sellers – Melvin, after all, has access to billions of dollars in backup funding, which suggests that its backers think it will be around for the long term. If anyone thinks they’ve crushed Wall Street or short sellers for good, they’re going to be disappointed.

Finally, market frenzies are fun (for those on the right side of the trade) while they’re happening, but every merry-go-round ride comes to a halt sooner or later.