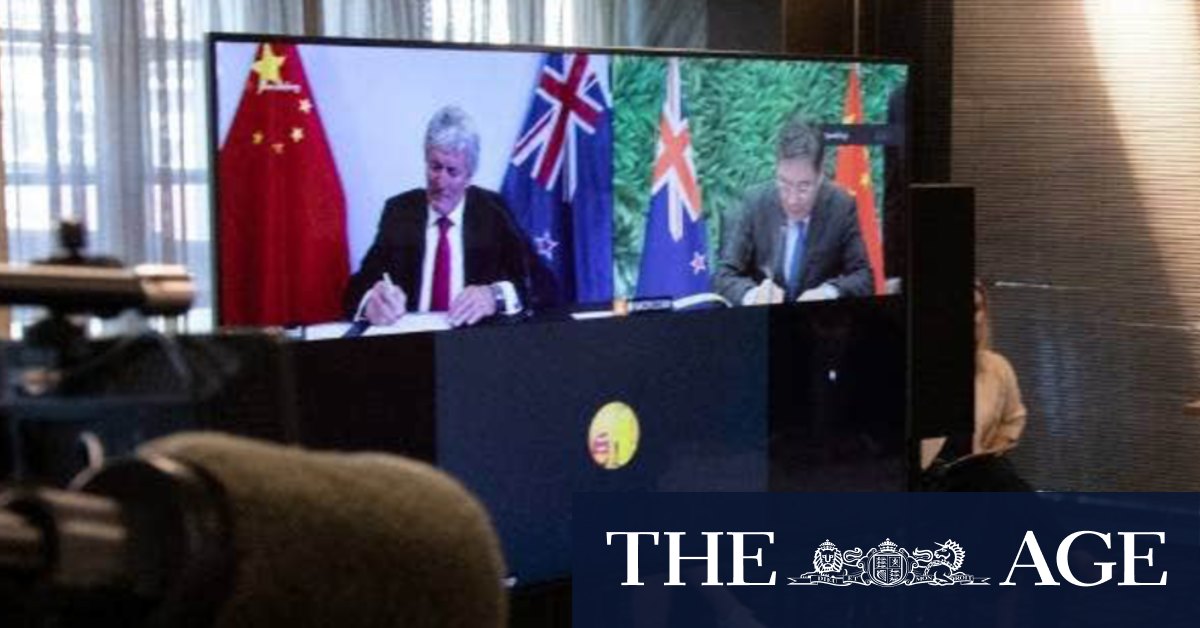 “I can’t speak for Australia and the way it runs its diplomatic relationships, but clearly if they were to follow us and show respect, I guess a little more diplomacy from time to time and be cautious with wording, then they too could hopefully be in a similar situation,” he said during the interview.

In a statement released by his office on Thursday, Mr O’Connor said he had “spoken with my Australian counterpart earlier today to reiterate, as I said in the interview, that we do not speak for Australia on this or any other matter”.

The comments were the latest in a series of moves that have unsettled Australian government officials who believe their trans-Tasman neighbour is being naive in its public comments on Canberra’s trade dispute with Beijing, according to multiple government sources.

The Sydney Morning Herald and The Age can reveal the Australian government expressed its concern to New Zealand last month after its Foreign Minister, Nanaia Mahuta, offered to mediate a truce between Australia and China and said both parties needed to “concede in some areas where they are currently not seeing eye to eye”.

Australian government officials were also put off earlier this month by New Zealand being the only member of the Five Eyes intelligence-sharing arrangement not to be in a joint statement criticising the arrests of pro-democracy figures in Hong Kong, which Beijing’s mouthpiece The Global Times on Wednesday described as a “wake up call” for Canberra.

New Zealand on Tuesday signed a trade agreement with China, offering Kiwi exports faster access to Chinese markets and a reduction in tariffs for paper and wood products.

Paul Maddison, Canada’s former High Commissioner to Australia, said the comments from a Five-Eyes partner were disappointing and played right into the hands of the Chinese Communist Party’s narrative.

“I remember when the intel-sharing alliance was reduced to 4-Eyes & how pleased we were to welcome NZ back,” he said on Twitter.

Rory Medcalf, head of the National Security College at the Australian National University, said Mr O’Connor “could learn a little more about diplomacy, and just did”.

Liberal MP Dave Sharma, a former senior diplomat, said the advice from New Zealand was not “particularly insightful or helpful.”

“The idea that Australia’s tone or wording is somehow responsible for challenges in our relationship with China is one we fundamentally reject and is at odds with reality,” he said.

“It betrays a lack of acquaintance with basic facts that I would not expect from a close friend and partner like New Zealand.”

Relations between Australia and China have deteriorated to their worst state in decades after Beijing slapped trade strikes of more than $20 billion on exports including Australian barley, wine, cotton, coal and beef.

Beijing has objected to a number of moves by the Australian government in recent years, including new laws to counter foreign interference, the banning of Chinese company Huawei from its 5G network and the push for an independent global inquiry into the COVID-19 pandemic.

James Laurenceson, director of the Australia-China Relations Institute at the University of Technology Sydney, said the Australian government could learn something from New Zealand in how it handled its relationship with Beijing but it would be “reluctant to admit that”.

“More likely, they would jump to dismissing such talk as hopelessly naive,” he said.

“But some facts remain. New Zealand is a proud liberal democracy. It is a “Five Eyes” [intelligence] partner. It cares about sovereignty. It has prevented Huawei from participating in its 5G network. It has criticised China on issues around human rights and international law.

“And yet, it has just struck an upgraded FTA whereas the last meeting Australia had with China toward the same objective was in November 2017.”

Asked for a response to Mr O’Connor’s comments, Mr Tehan said Australia’s relationship with China was “based on an assessment of our national interest”.

“We pursue engagement with China on the basis of mutual benefit, and the complementarity of our economies makes us natural trading partners,” he said.

“We are always open to dialogue as the best way to resolve differences.”

Previous Labor disunity on display, but there’s logic to the reshuffle
Next ‘It will never return to normal’: Telstra boss warns business needs to adapt to survive