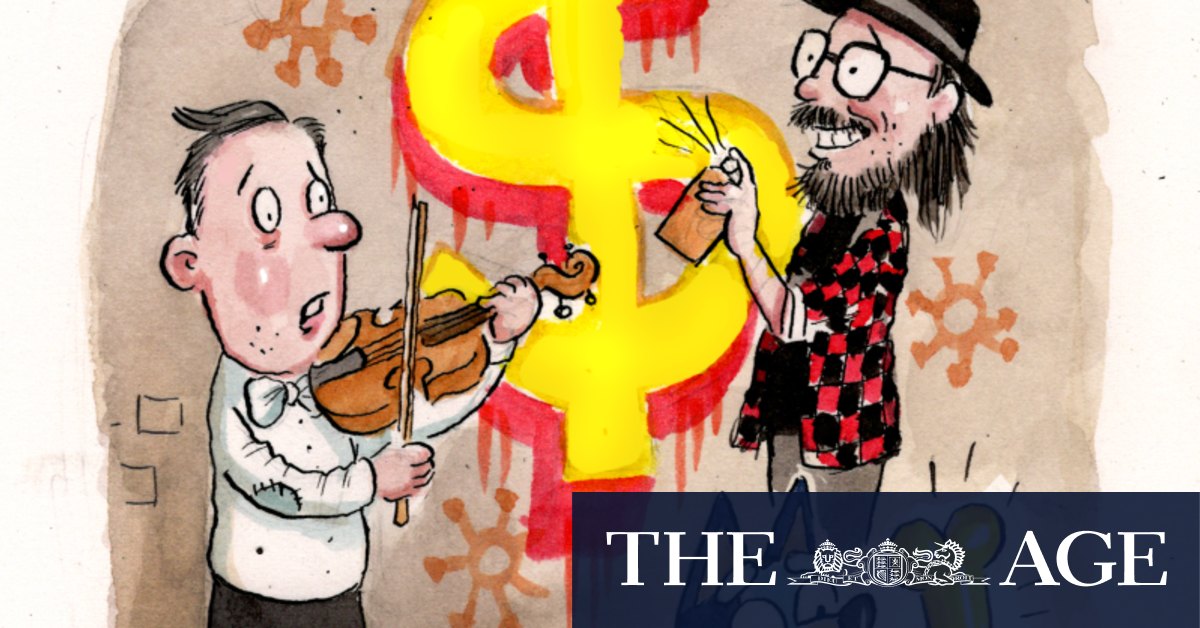 What will audiences get to see for Rone’s $1.86 million? The Geelong-born artist has taken over the Geelong Gallery with his latest project, but his grant-funded project is under wraps until 2022. We are told to expect “a mystery story in a deserted space, signature murals surrounded by the furnishings and fixtures suspended in time, a musical soundtrack leaving audiences feeling as though they are immersed within a movie rather than an exhibition”.

In the arts world, immersive experiences of the type Rone is famous for are so hot right now. But there was one grant allocation that eclipsed the street artist, and it went to our biggest star.

HVK Productions, the company behind the stage adaption of Bluey, Bluey’s Big Play, received $2.06 million. The dog is hot.

Friday on their mind

Scots’ Church in Melbourne boasts it is a “diverse and eclectic body of God’s people”, which makes it the perfect venue for Friday’s meeting of the Victorian Liberals state assembly.

Fresh from the Menzies preselection boilover, the conservative and moderate wings will come together as members and wonder what next after federal MP Kevin Andrews, 65, was defeated by commando-turned-barrister Keith Wolahan, who was just 13 years old when Andrews first won preselection for the prize seat in 1991.

Now Liberals ponder what the reformist mood of party members means for some of the party’s other superannuated white state MPs who are close to clocking up three-decade stints. Legislative Council chair Bruce Atkinson has notched up 29 years. Same goes for one-time treasurer Kim Wells. And who said politics wasn’t a job for life, huh?

Also facing a moment of truth: member Peter Adamis, who describes himself as a freelance journalist/commentator and writer, retired military serviceman and avid blogger. He faces expulsion for attacks on colleagues in his newsletters and emailing thousands of party members to attack factional enemies.

The bar for expulsion is set high. Likening South Coast MP Roma Britnell to a piglet trotting on a treadmill two years ago in an email wasn’t enough to get former MP Adam Kempton chucked out after his expulsion motion failed to get the required two-thirds majority.

There are also up to two casual vacancies to fill, but those posts will only last until the interminably delayed State Council is held under COVID-safe conditions, which could be as little as two months away. State president Robert Clark better get a wriggle on. If Menzies showed anything, it’s that party members like to say their say.

For a guy who appears hell-bent on shaking up compulsory superannuation, it sure is interesting to see how Liberal MP Tim Wilson approaches his own super portfolio. Parliamentary disclosures show the Victorian MP and husband Ryan Bolger used the summer break to rearrange the deckchairs.

For the pair, that meant using their super fund to get exposure to industrial property through Centuria’s Industrial REIT, as well as a stake in the online make-up seller Adore Beauty Group. The pair also took a stake in Betashares Asia Technology Tigers ETF, while Wilson himself took a personal stake in Betashares Australian Small Companies Select Fund.

An avid investor and watcher of financial markets, Wilson has been an outspoken advocate for regulatory change enabling younger Australians to tap their super to get a foot on the property ladder. But considering Wilson and Bolger already own five properties between them, that base is already covered.

Just how much cash is tuition from former prime minister Tony Abbott worth? Quite a bit, according to Sydney’s Warringah Liberals. A branch fundraiser headlined “Winning Back Warringah” – after Abbott lost the former safe seat to independent Zali Steggall – is offering tickets for $50 a piece, or 12 at a discounted price of $200. But the nominated value of some of the prizes is prompting some head scratching among members. A surf lesson and breakfast with the former PM and the Liberals last Warringah MP, gets top billing with an estimated value or $2500. Just how great do they think the guy is?