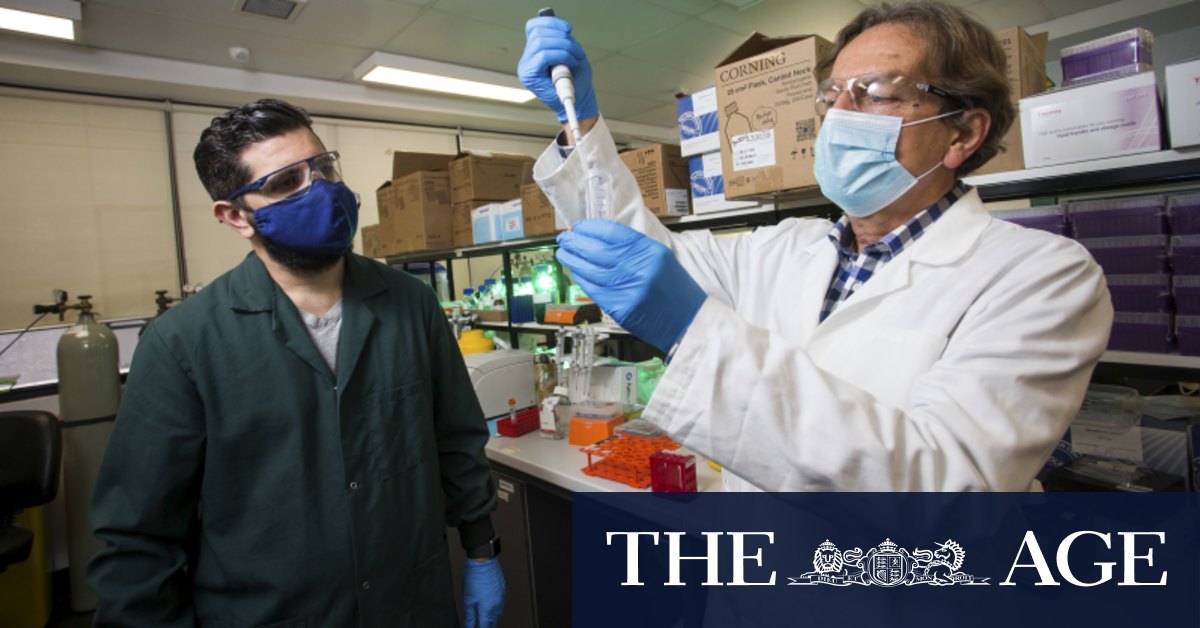 The government is working with local companies on a separate plan.

Science Minster Karen Andrews, who said Australia was already the “envy of many developed countries” thanks to the presence of vaccine maker CSL, confirmed on Wednesday that the government was considering the “brand new challenge” of mRNA vaccine production.

“An audit has identified some companies in Australia with mRNA production capability and we are currently working with them to explore if that capability could be scaled up into the future,” she said.

Before the pandemic, mRNA vaccines – which contain genetic code from a virus, rather than the virus itself – were a scientific novelty. But many scientists now believe they are the future of vaccines.

The Pfizer vaccine was approved for use in Australia last week and the first shots will be administered later this month.

Professor Pouton and his team believe that with sufficient government support an mRNA vaccine production line could be up and running within months. Local laboratory equipment company ATA Scientific says the equipment can be imported and it is “absolutely possible” to build a facility.

There are many questions left to answer, and other scientists are sceptical such capacity could be brought online in the short term – but all agree that it is important for Australia to get into the mRNA game at some point.

“If we got started, and worked up that capability, there is no reason why we couldn’t be manufacturing one of these existing vaccines under licence. And that would really help the flow of [vaccine] doses to Australia,” Professor Pouton said.

Professor Pouton, who is also leading a federally-funded effort to build an mRNA COVID-19 vaccine, has been in talks with Canadian vaccine infrastructure manufacturer Precision NanoSystems as well as ATA Scientific.

On Tuesday, Precision received $C25.1m ($A25.8 million) from the Canadian government to set up an mRNA vaccine and medicine manufacturing plant in that country, due to open 2023.

Applications scientist at ATA Scientific, Peter Davis, said it was “absolutely possible” for Australia to set up mRNA vaccine manufacturing at scale.

“It doesn’t require multi billions of dollars to create a facility,” he said.

It’s not yet clear exactly what technology would be required to manufacture Pfizer or Moderna’s COVID-19 vaccines under licence, but both companies have worked with Precision in the past, Mr Davis said.

He said technologies such as Precision’s were already available for import into Australia, and could be used to develop a local manufacturing facility for RNA technologies. This could be for the production of COVID-19 vaccines and other emerging genetic medicines.

Professor Pall Thordarson, chief investigator at the ARC Centre of Excellence in Bio-Nano Science and a member of the effort said it was “not a question of whether we can do it, but when”.

“We have all the expertise we need in this country. What is needed is the right investments and partnerships. We are working carefully to ensure that will happen. But there is no guarantee yet.”

CSL have been contracted by the government to make 50 million doses of AstraZeneca’s viral vector vaccine at the company’s Broadmeadows facility. CSL has said there is a “low likelihood” it could prepare its facilities in time to make mRNA vaccines under licence during the COVID-19 pandemic.

The company has indicated it would consider investment in mRNA technologies in the future, however. It declined to comment on Wednesday.

Australia does not have local mRNA manufacturing facilities. A 2017 report prepared for the Defence Department warned our lack of vaccine infrastructure could leave us short in the event of a pandemic.

To achieve onshore production for existing vaccines, Australia would also have to reach an agreement with those companies. A Pfizer spokeswoman said it was working to expand its manufacturing capacity, both internally and by signing contract manufacturers.

Other scientists backed the need for investment in mRNA vaccines but were sceptical it could be done in a realistic time frame.

“I don’t think we can. I think it’s too late. But it shouldn’t stop us from doing something for the future,” said Professor Trent Munro, director of the University of Queensland’s unsuccessful effort to build a vaccine for COVID-19 .

“I am very wary about companies who say they can do large-scale commercial manufacturing – as opposed to those companies that actually can. That’s a big difference,” he said.

“Australia needs to figure out ways to attract more large biotech here, so we have the established manufacturing capability on shore. Other than CSL, most of the other presence we have had here has been slowly shut down and moved offshore.”

Associate Professor Archa Fox, an mRNA researcher at the University of Western Australia and president of the RNA Network of Australia, said the plan “totally has a reasonable chance of success”.

“It could be up and running within a year. In Canada, they are pushing forward with this.”

Professor Fox said she and several senior scientists had been canvassing companies and sites across Australia to establish capacity, with sites mooted in Western Australia, NSW, Victoria and Queensland. “There are several different irons in the fire.”

“It seems like a no-brainer, that we should be getting into and investing in this space,” she said.

Mark Sullivan, founder of Australian-based vaccine developer Medicines Development for Global Health, is working with a team of scientists and developers to sketch out what Australia’s science infrastructure goals should be.

Long-term an mRNA vaccine plant would probably be important, he said. That would cost north of $100 million and take two to three years to build, he said.

“How much money are we losing in our economy? these numbers start to look not important relative to the impact on society,” he said.