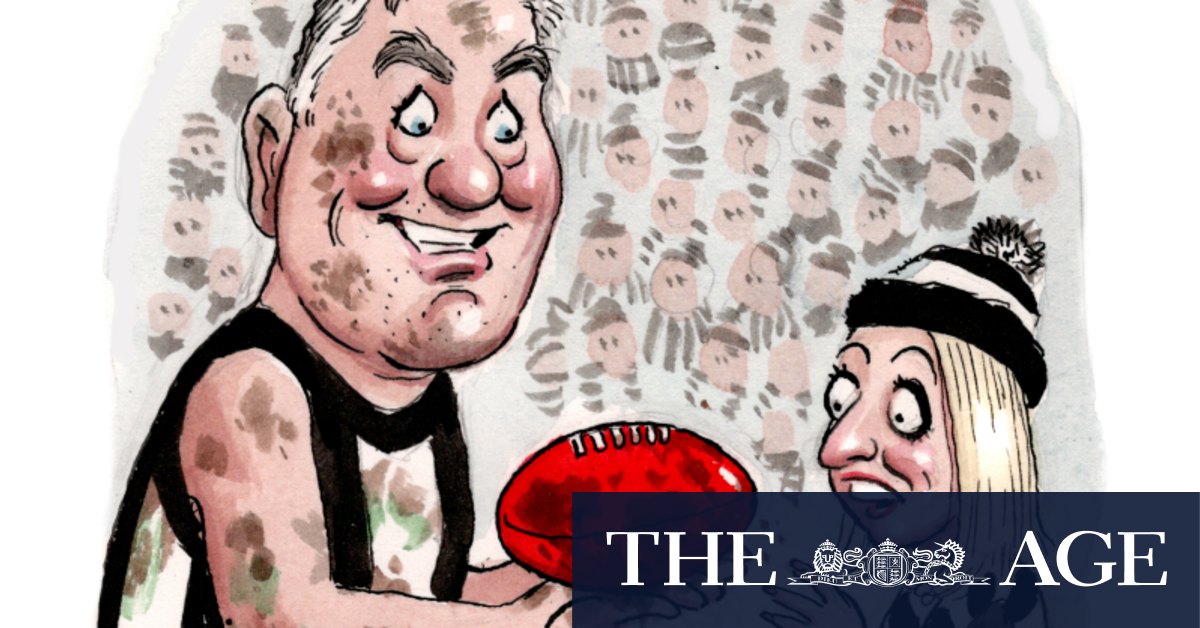 Hot under the collar indeed. Possibly because Wylie has the Collingwood presidency in his sights? We are only speculating.

But those closer to Collingwood tell CBD Wylie – while well regarded – is somewhat of a longshot. Smarter money is on registered liquidator Mark Korda, a long-time Collingwood vice president. He is favoured by many, even if he is considered to be very close to Eddie’s Ancien Regime.

And of course, there’s also a wild card candidate. McGuire defended the former Australia Post boss and Collingwood board member Christine Holgate as “one of the most impressive people I have met” – and Eddie’s met a lot of people! McGuire even clashed with Prime Minister Scott Morrison over his attacks on Holgate, which led to her resignation. Could the former Blackmores boss end up in the top chair at Collingwood? Beats us, but it says something about the unenviable position Collingwood finds itself in that someone as controversial as Holgate is a chance to rehabilitate it.

Yesterday we brought you the news that Liberal Party member Peter Adamis faced expulsion from the party due to his harsh criticism of colleagues. Adamis emailed thousands of party members to attack factional enemies – email addresses that he should not have gained access to as a branch member and not an official.

Well, we were right at the time, readers. That motion at the Victorian Liberals state assembly at Scots’ Church on Friday required a two-thirds majority vote to succeed, and needed the support of both the moderates and conservative Michael Kroger–Michael Sukkar forces to support it.

But Collins Street, we have a problem. Adamis, who describes himself as a freelance journalist and commentator, retired military serviceman and avid blogger, has been stuck in Greece, due to the COVID pandemic.

And he wasn’t given proper notice of the expulsion motion, so it can’t be put to the vote this week.

Some are pointing the finger at State Director Sam McQuestin’s office for the slip up. It’s likely that the vote will be delayed until the next state assembly. For Adamis’ enemies, revenge will have to be served cold.

The major political parties have rushed out of the gates shaking the tin for cash in the first parliamentary week of the year after COVID rendered 2020 a write-off in the donation stakes.

Energy Minister Angus Taylor was the first of the gates for the Coalition, fronting a “boardroom policy forum dinner” at Barton’s upscale Ottoman restaurant on Wednesday night, hosted – rather predictably – by the Minerals Council of Australia.

Assistant Treasurer Michael Sukkar will follow suit in a week’s time in what is shaping up as a three-way, bipartisan scheduling clash. The ALP’s Federal Labor Business Forum is bowling up Opposition Leader Anthony Albanese for an event on the same evening, priced at $5000 a ticket and $3500 for FLBF members. Across town at the members-only Commonwealth Club, Enterprise Victoria is throwing a bash headlined by Trade and Tourism Minister Dan Tehan. Fun times indeed.

Here’s a cause we can get behind. NSW senator Perin Davey and West Australian Labor MP Brian Mitchell have taken the lead on establishing a new parliamentary friendship group dedicated to spirits. No, we’re not talking about ghosts.

Gregor made a motza selling a 50 per cent stake in Four Pillars to Lion in 2019 for an undisclosed value – although the fact the Sydney-based distillery turns over more than $35 million in sales annually, it’s fair to say a lot of cash changed hands. Perhaps it goes without saying he looked at home holding court in his role as the Australian Distillers Association president at the event, themed “Supporting Jobs from Farm to Glass” and dedicated to recognising the “significant economic contributions to our communities in responding to the COVID-19 pandemic”.

At both end of life, are we replacing care with cash?