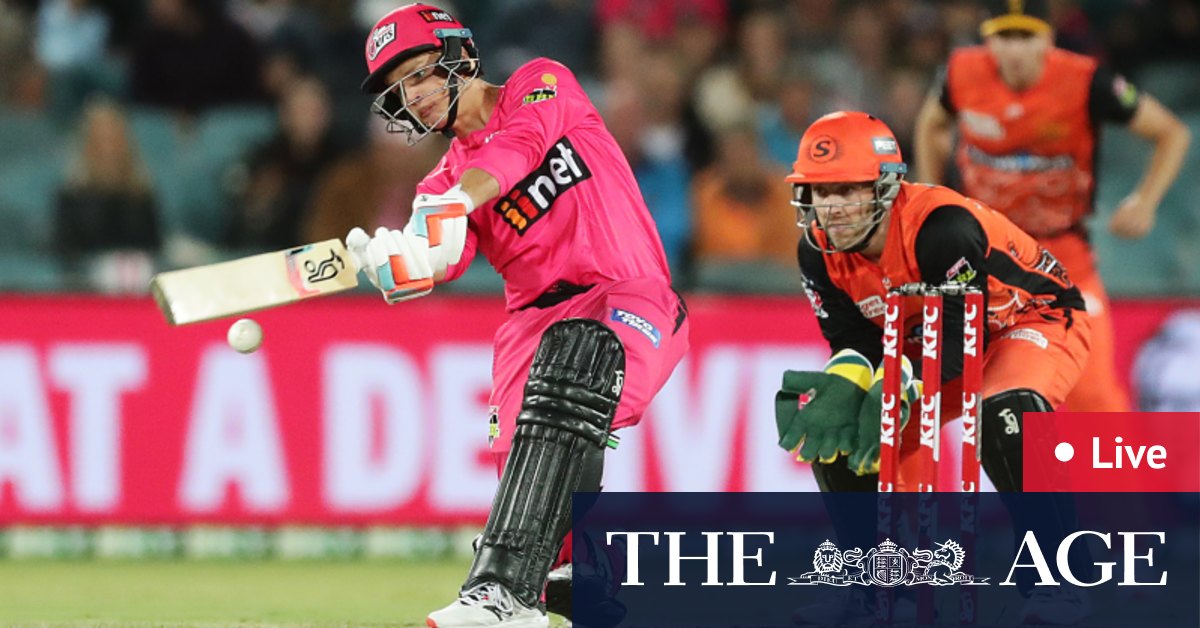 “This one is special, everyone in the country has done it hard. We didn’t get to stay at home even when we were at home,” says Steve O’Keefe. “I’ve had a great 10 years, we’ll see. It’s been an unbelievable journey.”

The veteran tweaker says he hasn’t made a decision on his playing future but would love to stay connected to the game in some way or another.

That’s us done for tonight, well done Sixers, well done cricket fans for making it to the end of another BBL season. May the next one be just as good and hopefully, a month shorter.

That’s a 27-run win, a third title for the franchise and don’t they love it. They get their first game at the SCG all year and take care of business on the back of a superb knock of 95 from James Vince. Jackson Bird (2-14) as the pick of the Sixers’ bowlers, Dwarshuis with three wickets, O’Keefe as tight as always.

They are 7-159 and can’t get bat on ball thus far in the final over, which Dan Christian has the honour of delivering. AJ Tye skies one, Henriques takes the catch and this game is OVER. Now Abbott in on the act, Behrendorff gone for a duck. Final ball of BBL 10 is smashed but the Sixers have gone back-to-back.

Dwarshuis to bowl the second last over. Suffice to say, Perth need to connect with a few. And Hardie has a swing and a miss to start. Hold on… Hardie SMASHES one into the stands, left nothing in the shed there. Boy oh boy he found the screws with that pull shot. So now it’s 32 from 10. Goes again… but he’s OUT. Steve O’Keefe takes the diving catch and Hardie goes for 26.

Tye comes to the crease and sadly for him, only a flurry of sixes is going to do the job. Silk drops a rare one in the outfield as Richardson gets a life on five, then has a clean miss to end the over. It’s 7-159.

That’s curtains for Perth. That goes straight up, Bird had enough time to count to 100 there, gets under it and makes the key grab. Abbott gets the wicket in a good bowling comeback and it’s 6-142, Scorchers needing him to go into overdrive here in the final three overs.

Hardie deposits Brathwaite over the fence to start the over with a six. Need a few of those in the bag to make this a contest. And backs that up with a boundary as Dwarshuis mucks up the stop in the outfield and costs his side two or three runs. Brawaite replies with a yorker, from which Hardie extracts a single. Now Turner in on the action…. that was pure and races to the fence. Now a miss… a bad run and a missed run out! Turner was miles out of his ground and Brathwaite just needed to throw the stumps down and it was curtains.

And it was hardly the result the Scorchers were after… it was the home side that ended up taking control and likely winning the title. Christian back for the Sixers with his tricky seamers and this is top-shelf bowling. Turner can’t get a bat on it for the moment as he tries to force one through the off side. So two wickets and just nine runs from the past 10 deliveries. The only thing that has surged has been the run rate.

It’s 5-126 with 63 required off just four overs. Not a single boundary in that Power Surge.

Josh Inglis gone next, Dwarshuis has 2-1 off his past three deliveries. They now need 72 off 32, Aaron Hardie with the stick, he and Turner need a miracle now.

The Power Surge was called but the Sixers are the ones that are energised. James Vince with a screamer to get rid of Marsh for 11, Dwarshius gets Marsh swinging through the covers but Vince cleans it up with the diving grab. What a night he is having… Sixers right in charge now, Scorchers are 4-116 and this is getting away from them as Ashton Turner arrives.

Another terrific contributoin for the Sixers tonight and again in a big match. Run rate now over 12 as the Scorchers call for the Power Surge, so just the two players in the outfield for the Sixers. Six overs remaining and Perth need to get a wriggle on here. They are 3-114 chasing 189.