Breaking News
Home / AFL / Ed, it should never have ended like this

admin 2 weeks ago AFL Comments Off on Ed, it should never have ended like this 9 Views 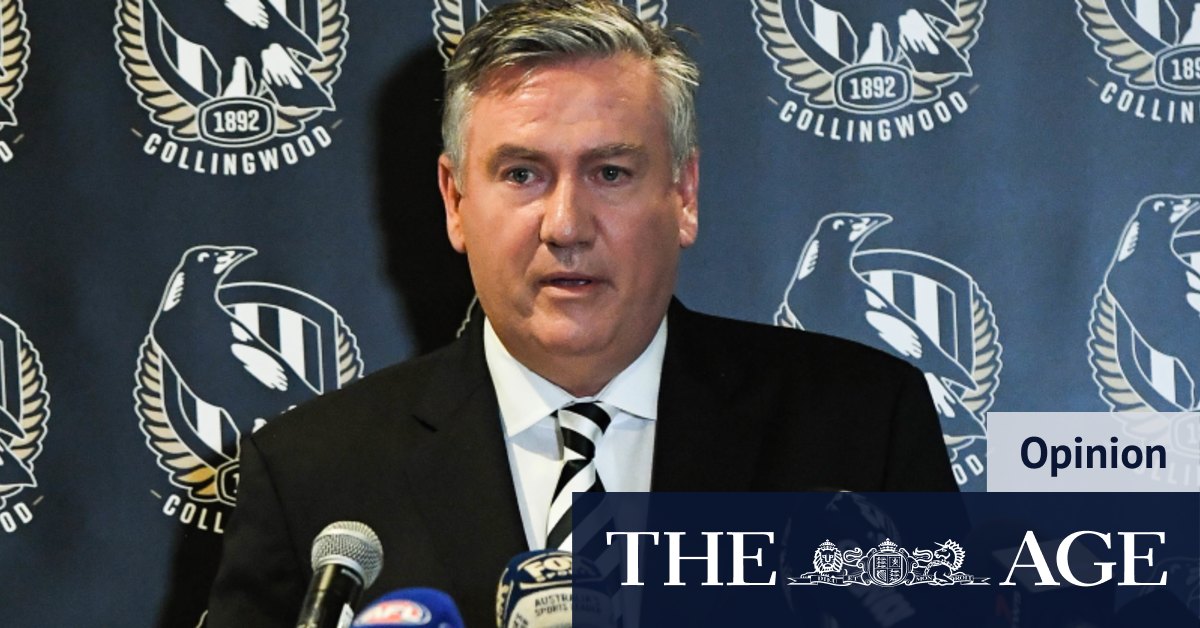 Was it the Indigenous community and its leaders who led a petition demanding McGuire step down?

Or was it the media in its many forms from the eloquent but horrified Barrie Cassidy in last week’s Age to the throng that smelt blood when they demanded answers of the AFL chief Gillon McLachlan the day after McGuire’s dreadful performance?

Or was it the AFL whose commission met on Monday and spent some significant time on the Collingwood-McGuire problem? Not to mention powerful Collingwood supporters meeting all over town and beyond.

In truth it was none of the above but the man himself who wrote his own football epitaph by failing to listen to what so many people at his football club and beyond are now starting to truly hear. Having resisted for so long but finally commissioned the cataclysmic review leaked beyond his control McGuire failed to understand what it was truly saying. Having failed to listen to Lumumba and continuing to insist upon the good he had achieved for the former player’s family. Having feared the dramatic and potentially costly implications of a true heartfelt apology.

This is the column I least expected to write about McGuire’s grand finale at Collingwood. Having worked with and against him over so many decades I thought for years he’d outlast us all.

Peter Murphy, the corporate leader McGuire secured back in 2017 to review the club’s practices and now the internal favourite to take over the presidency, appears to have tried to influence McGuire and enforce a gracious departure – attempting to force term limits for all club directors, but McGuire resisted. In 2018 after all the team came so close to achieving a second flag under his leadership.

Even after he read the writing on the wall late last year and granted himself a year-long farewell tour, the impression was he did not quite believe it was all over – telling friends he would stay a little longer if the right replacement did not step forward. Now even that long-awaited succession plan is out of his hands.

But then I never believed he could have read the room as badly as he did last week. I never believed his hubris would so spectacularly outweigh his street smarts. I never thought the football and wider Australian community would move so quickly beyond McGuire’s way of thinking and turn against him with such collective disgust.

It was tough to listen to him boast about his club’s major community achievements given that they buried the so-called racism review for so long – even from the AFL – and given McGuire’s own repeated history of so-called gaffes that caused so much pain.

McGuire has said many times in the past he sacrificed a career in politics for Collingwood and famously told a group of Magpie players his one-eyed commitment to the club had cost him five Gold Logies. No longer a breakfast radio star, he remains at the helm of the Nine Network’s Millionaire Hotseat and the host of the Wednesday night edition of Footy Classified. And he is a major player in Fox Footy’s AFL team.

McGuire suggested on Monday he would take a breather from the above for a period. What lies ahead for him in the short-term is his family and hopefully a period of genuine reflection, although his heartfelt thanks to wife Carla for living for so long with the pressure that came with his role would suggest he still remained oblivious to the reality that the pressure was too often of his own making.

McGuire at his best was better than most but his bad was appalling.

McGuire took the Collingwood Football Club from its run-down, long-time home in Abbotsford to the prime real estate of the Olympic Park precinct with a state-of-the-art facility, financial success and six grand finals in 23 years for one premiership – a record with which Magpie supporters are well familiar. When announcing the Mick Malthouse-Nathan Buckley succession plan that created so many rifts he likened the daring to the John F. Kennedy space program. But as he said, although he always tried, McGuire did not always get it right.

His position of influence within the AFL community was unrivalled for many years and while that influence was usually aligned with Collingwood’s relative strength, his ability to grab a headline hurt the club too often. Tellingly he was at his quietest in 2010 and now that he has gone for good as president the West Coast premiership of 2018 and upset preliminary final loss to Greater Western Sydney will continue to pierce his soul.

His work behind the scenes granted Collingwood prime position at the MCG and later he was a major player in the deal with Premier Daniel Andrews that secured the grand final at football’s traditional home for decades. But it was tough to listen to him boast on Tuesday about his club’s major community achievements given that they buried the so-called racism review for so long – even from the AFL – and given McGuire’s own repeated history of so-called gaffes that caused so much pain.

CEOs and commissioners alike rarely stood up to him fearing his wrath and if McLachlan appeared limp last week in distancing himself from McGuire but not condemning him it is worth pointing out that McLachlan has rarely appeared less supportive of his long-time associate and friend.

In the years to come the AFL community and his beloved Pies will pay tribute to McGuire’s major and often brilliant part in their collective histories. McGuire at his best was better than most but his bad was appalling. The good as time passes will once again overshadow the bad should McGuire move gracefully and with humility into his next chapter. But Ed, it should never have ended like this.

Previous Crown must reform its corporate culture
Next Lightning round: Barty delivers double bagel in warning to title rivals