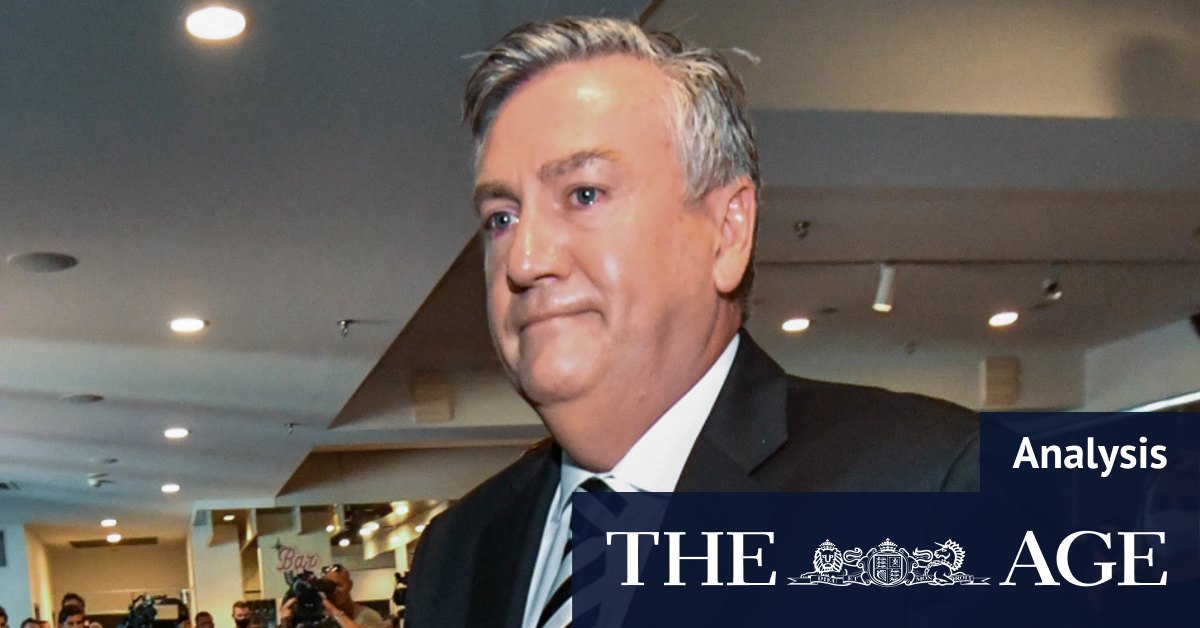 McGuire’s opening words now came out in the most un-McGuire-like manner, through a reedy catch in his throat. “I try my best and I don’t always get it right,” he said, “but I don’t stop trying.”

At other moments, too, during a 15-minute monologue, McGuire’s voice wavered as it rarely has throughout his long career in media and footy, which was not so surprising, because it has been his life’s work. He had been emotional, too, when telling the Collingwood board of his decision the previous day.

But that familiar voice was its usual bold self when he came to utter the words that so many think should have been his preface last week and might have given it different direction altogether. “The Do Better report is an acknowledgement that our club, our game and our country have not always got it right,” he said, “and for that, WE. ARE. SORRY.” The pauses are his.

His mishandling of the Do Better report’s release will sit as an asterisk on his record, but won’t and shouldn’t obliterate it.

There, he seemed to say, it is said. Manifestly, it was too late, but at least it was said. If there is a moral in the last week, it is that the power of words remains undimmed.

Threading and underscoring McGuire’s words was a seeming apprehension that this last big week would make a distant memory of the 1200 preceding it, that his legacy would be reduced to a single issue and moment, and that those two damning words would become the last word on his time at Collingwood.

So McGuire embarked on a tour de force of Collingwood in his time. “From the moment I became president of Collingwood Football Club on my 34th birthday back in 1998, my sole motivation was to heal, unite, inspire and drive a new social conscience, not just into this club, but sport and the community in general, and build an organisation that would be a place of opportunity for all people.”

It sounds grandiose, and yet is true that Collingwood is unrecognisable from the club when he assumed control, and overwhelmingly changed for the better. His mishandling of the Do Better report’s release will sit as an asterisk on his record, but won’t and shouldn’t obliterate it.

It is a formidable body of good work on many fronts (perversely falling down only in football, the core business, with just the one premiership in his time). Collingwood has clout and under McGuire has used it. The Pies have fingers in many pies far removed from football, communal, cultural and philanthropic, and he deserves credit for that.

“It is because we have so much going on, so much good to do and with the interruptions and pressure from COVID-19, that I committed to continue my presidency until the end of this season,” he said. “However, I don’t think it is either fair or tenable for the club or the community. People have latched on to my opening line last week and as a result I have become a lightning rod, but it has placed the club in a position where it is hard to move forward with our plans of clear air.

“When I came to Collingwood, it was a club driven with rivalries, enemies and division. It has not been the case in my time. So I do not want any of this to cause rancour or factions. It is better to fast-track my leaving of the club from the end of the year to now.”

It is curious thing about McGuire that for a man who deals in words, they so regularly trip him up. Perhaps it comes from speaking so many. Even this day, revisiting his well-known Broady beginnings and the moment he fell in love with Collingwood, he said: “For the first time in my life I have felt part of a community. I am going to say it again – the first time I felt part of any community.”

It is true and heartfelt, but might have been better left unsaid at this moment.

History is generally a kind judge. Ultimately it will look well on the McGuire era. If it marks him down for staying too long, he won’t be the first or last. “The benchmark of time and office is to ask if the organisation is left in a better place than when the term began,” he said. “I believe that to be the case, but one thing I have learnt this week [is] plenty of people have their say about me.”

Done, McGuire left without taking questions. He had said enough.

In the recording, Wilkinson can be heard asking his former manager directly: “So you know …