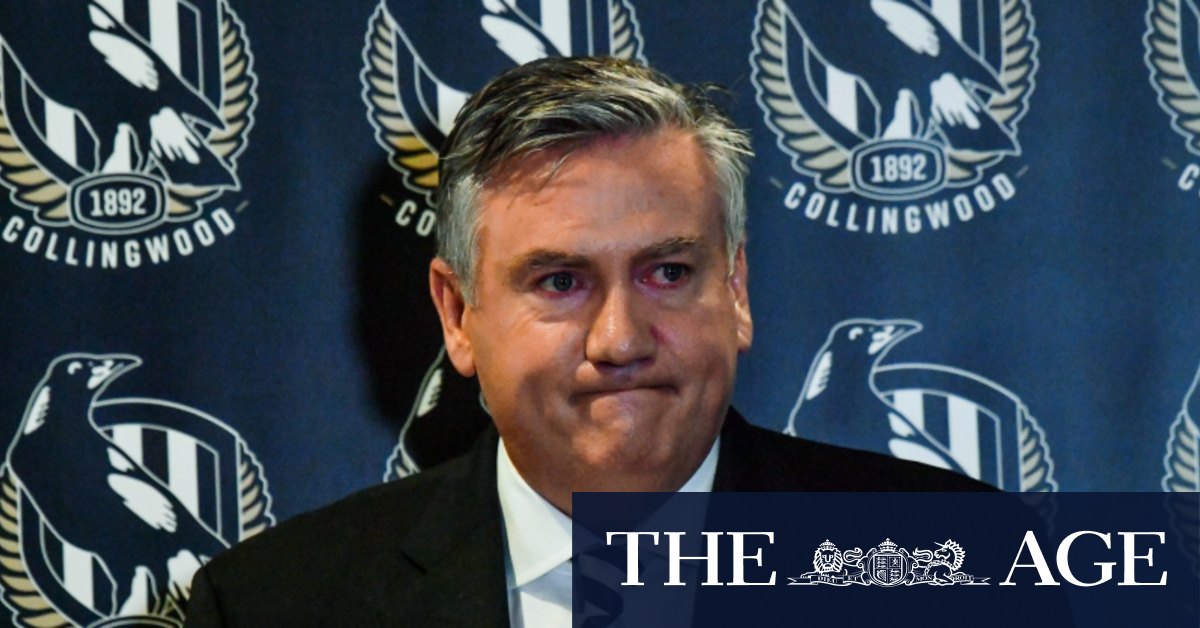 But there was also a view, as The Age foreshadowed last week, that McGuire’s outstanding 22-year service and commitment to the club should lead to him exiting in as dignified a manner as possible.

McGuire, criticised for not reading the room on the day Do Better was officially released, read the play this time, his choked-up yet defiant resignation speech the culmination of a frenzied pile-on that seemed more befitting a political leadership spill than the leadership of a footy club.

For McGuire, one of Melbourne’s most visible figures, pride cometh before the fall, in that it had been his ill-judged use of the words “historic and proud day″⁣ at the February 1 media conference that had triggered the calls for his resignation, as first media, then Indigenous leaders, politicians on the left and footballers called for his removal, while Collingwood’s sponsors signalled their unease.

CGU, who had already decided to not renew their sponsorship with Collingwood after this year, had pointedly diverted $1 million of the club’s 2021 sponsorship entitlement to Indigenous support programs, and while Holden’s money had left the building, the company’s logo and name still adorns Collingwood’s headquarters – a measure of the club’s potential exposure with corporate partners, particularly in a COVID-challenged environment.

But the view of key figures within the AFL and some Collingwood insiders is that this episode – which stretched over eight days – was the last straw, and that McGuire’s demise began eight years ago, not eight days ago – namely in 2013, when he made his infamous “King Kong” comment about Sydney champion Adam Goodes on breakfast radio.

Club sources said there had never been a discussion at board level in 2013 about McGuire’s hold on the presidency, in what is a measure of the shift in board composition and sentiment.

The prevailing view from Collingwood insiders, past and present, is that Eddie’s exit was due to an accumulation of mis-steps since 2013 and that over his 22 years in the position he had a rap sheet of incidents – mainly ill-chosen comments – that embarrassed Collingwood and forced others into defensive measures.

Indeed, Do Better highlighted Collingwood’s “culture of individuals, if not quite being bigger than the club, then at least having an unhealthy degree of influence over club culture”.

That comment has been almost universally accepted as a barely veiled reference to McGuire, a suggestion he did not accept at the fateful February 1 media conference. The Collingwood players, men and women, meanwhile – led by Darcy Moore, Brodie Grundy and Taylor Adams – issued an apology to those who had suffered from discrimination or exclusion in the past.

If Collingwood saw two incarnations of Eddie – one before Adam Goodes and one after that disaster – his grip on power had been loosened somewhat since the review of club operations by Peter Murphy, now interim co-president with Mark Korda, when the Magpies reappointed Nathan Buckley and oversaw a revamp of football, a change of chief executive and rose up the ladder to a grand final.

But, significantly, one recommendation of Murphy’s review failed to be adopted – that the Collingwood board introduce term limits for directors, a move that would have put an end-date on McGuire’s presidency.

Do Better was commissioned in 2020 in response to ex-2010 premiership player Heritier Lumumba’s persistent allegations of racism in his time at the club. Collingwood’s choice of authors for the review, Professor Larissa Behrendt and her UTS colleague Professor Lindon Coombes, was recognised by Collingwood and AFL insiders as likely to produce an unflattering result.

Most of all, this meant a damaging outcome for McGuire. The club board had received the report on December 17, then held an emergency board meeting to digest the finding. McGuire had days earlier surprised the board and staff at Collingwood with a public announcement over his plan to stand down in 12 months on December 14.

Collingwood had wrestled with whether to release the full monty version of Do Better, or just an executive summary. But they did not release the racism review in late December or January – initially because players and staff were absent – creating a perception that it was being hidden.

Club sources say that it was always going to be released, that no other path was credible and that it would have been difficult to offer only an executive summary to media when the club had commissioned the review knowing that it would involve a confession or mea culpa for past sins – and these stretched right back to the early 1970s with Carlton’s Syd Jackson and then the AFL-changing racist incidents involving Nicky Winmar and Michael Long, both against Collingwood.

After the report, McGuire was bombarded with criticism. Some of the fiercest denunciations came from Indigenous leaders – ranging from Greens Senator Lidia Thorpe to academic Marcia Langton. McGuire’s supporters in Indigenous circles – such as Jason Mifsud, the former AFL Indigenous and multicultural manager and Clinton Wolf, managing editor of the National Indigenous Times and former Dockers’ player, spoke in his defence based on personal experience.

But Mifsud had spoken to The Age only in response to the pile-on and McGuire’s resignation. For Eddie, these words came only as comfort in his Collingwood afterlife.

McGuire, having failed to find the right words on the first day of February 1, had found a more accurate summation of his position in his departure. Like losing prime ministers on election night, he was better in concession.

“I don’t think it’s fair or tenable for the club or the community (for me to remain). People have latched on to my opening line last week and as a result I have become a lightning rod for vitriol but worse, have placed the club in a position where it is hard to move forward with the implementation of our plans in clear air.”

Don’t miss any of the news, results or expert analysis from the weekend of sport with our newsletter delivered to your inbox every Monday. Sign up here.

Loading To Hunter’s surprise, however, the AFL has not spoken to him at any stage …