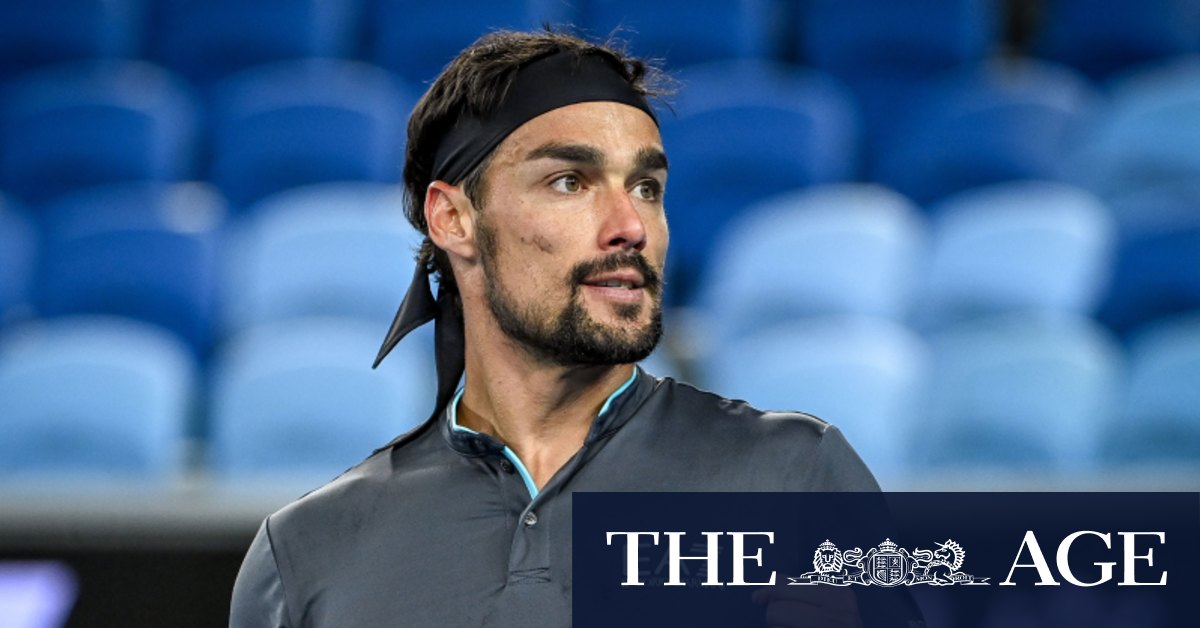 “In my eyes (Fognini) was playing at a very high level and not giving a lot. I felt like we were going to try and expose his movements a little bit, but he was hitting some pretty good … shots. And then I couldn’t be too passive on the rallies because he was stepping in and dictating from the get-go.

“So, look, I’ll have to go back with my coach and team and look how we could have confronted that match differently, because probably what I did today wasn’t it.”

The 21-year-old has shown when at his best, like in the ATP Cup in 2020, he is a player who feeds off the home crowd quite a bit.

On top of de Minaur’s game faltering and Fognini controlling almost every single rally, that lack of crowd did not seem to help.

De Minaur had started the season in good form winning an ATP title at Antalya in Turkey before coming to Australia to quarantine ahead of the first grand slam of the year.

But he lost twice in admittedly tough matches at the ATP Cup against Stefanos Tsitsipas and Roberto Bautista Agut.

However, he bounced back from this in the first two rounds of the Australian Open with very impressive wins over Tennys Sandgren and Pablo Cuevas, both in straight sets.

Fognini was a considerable step up in class to both of those players. The Italian was impressive in the ATP Cup, beating Benoit Paire and Carreno Busta before falling to a red hot Russia and Andrey Rublev in the final.

De Minaur will learn a lot from what the 33-year-old Fognini did to him.

The No.16 seed was absolutely relentless against de Minaur, even having come off an epic five-set match against countryman Salvatore Caruso on Thursday night.

That match made headlines for the passionate argument both players got engaged in after Fognini’s win, but there was no sign at all of such temperamental behaviour on Saturday night.

Fognini almost exclusively hit with incredible depth and power to push de Minaur back behind the baseline and nullify his ability to attack the net.

He also moved de Minaur to each corner of the court expertly, and punished him with forehand and backhand winners at will.

The Italian broke de Minaur in the eighth game of the first set with that kind of play, but the local boy was able to break back when Fognini produced four unforced errors in a row.

Fognini broke again and served out the set regardless.

De Minaur’s serve deteriorated in the second set and when Fognini broke him there was visible frustration for the Australian.

He could be justified in feeling slightly miffed for the fact that Fognini’s ball striking remained at an extremely high level, and did not relent to give de Minaur time to stop defending or being rushed around the court.

Not even two foot faults in the third and final set could break Fognini’s concentration and momentum, nor could a wobble to lose serve at 5-2. He consigned de Minaur to his third elimination in an Australian Open third round.

Fognini has advanced to his fourth Australian Open fourth round where he will likely play Rafael Nadal, orBritain’s Cameron Norrie should he upset the Spaniard.

Previous For some, gruelling days
Next ‘Occupancy has hit the cliff’: Thousands of student apartments mothballed