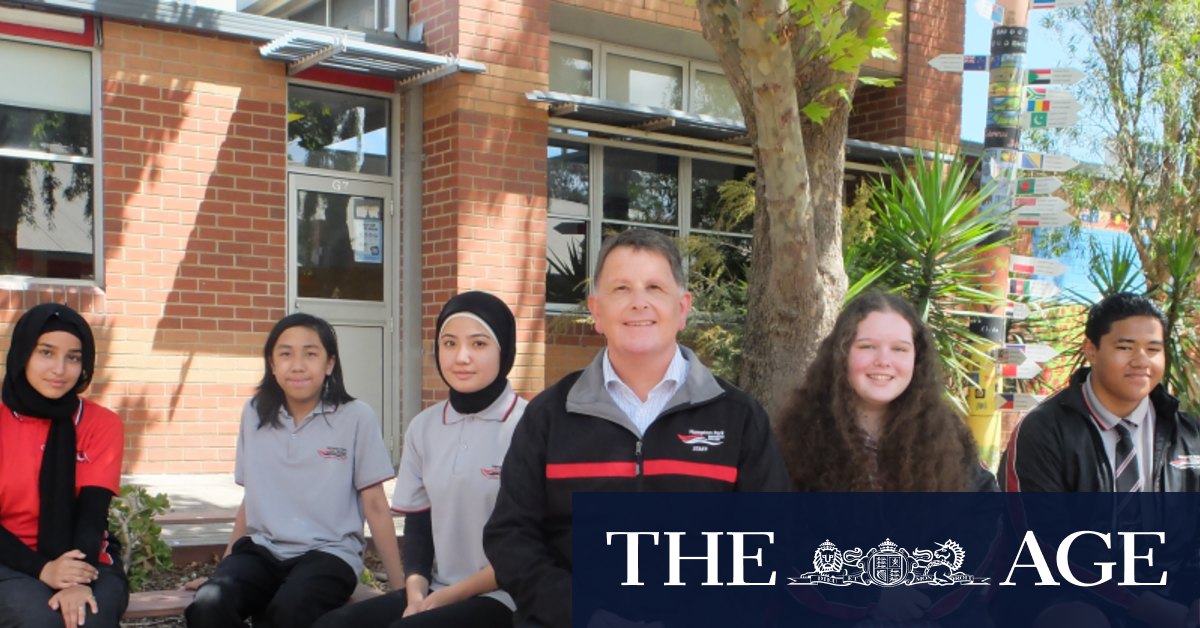 Students are grouped in classes based on their proficiency, not their age, and are pushed to accelerate their learning and join more-senior students in at least one subject.

Parents have signed letters approving their children’s participation “in an individual learning program that departs from the Victorian Curriculum F-10 and reporting guidelines”.

“We are obligated to notify you that by signing this personalised learning plan you understand that your child has chosen an educational program that is different from the Victorian Curriculum F-10 provision model,” the letter states.

Hampton Park principal Wayne Haworth said he was trying to improve student engagement at a school where kids are too often there reluctantly, and where their parents often had negative experiences of education.

“Some of our parents have had education overseas, some of their experiences of education haven’t been so positive and that brings almost a predisposition of what school would be like and that can impact on young people,” Mr Haworth said.

“But … if I can see young people having a say in what they are doing and having some input then it starts to challenge some of the negativity about education and learning.”

Hampton Park services an underprivileged part of Melbourne where the level of disadvantage has been growing in recent years, according to the school’s most recent annual report.

Forty-seven per cent of primary parents are unemployed and 51 per cent are unskilled workers, the 2019 report states. Seventy per cent of students have a language background other than English, and many come from refugee families, the report states.

Despite this, the school has also achieved a steady improvement in its VCE results in the past five years, outperforming many neighbouring secondary schools.

Under the school’s new curriculum, students in year 7 will study five core subjects and six electives, before choosing their own pathway in year 8, in consultation with teachers and parents.

Core literacy and numeracy studies are mandatory, but all other subjects are optional, Mr Haworth said.

“Schools for a very long time have been modifying the learning program based on students’ needs, and largely around their additional needs,” Mr Haworth said. “We have taken that approach and applied it not just to some students but to all students.”

Hampton Park is not the first government school in Melbourne to reject the standard curriculum in favour of an individualised program, following in the path of trailblazer schools Templestowe College and Mount Alexander College, where Mr Haworth was previously principal.

But unlike Hampton Park, which has more than 1100 students, those two schools were overhauled in an effort to reverse declining enrolments that threatened their existence.

“What is happening with kids is they are losing their excitement and their motivation for learning,” he said.

Sue Bell, president of the Victorian Association of State Secondary Principals, said the Victorian curriculum was ripe for an overhaul, and fell short on teaching important skills such as critical thinking and communication skills, because they are difficult to assess.

“So much of what we do in secondary education is controlled by students having to meet the requirements of the ATAR for university entry, it kind of puts a straitjacket on our way of teaching, but a decreasing percentage actually use the ATAR,” Ms Bell said.

But she cautioned that students, particularly in the younger years of secondary school, need a lot of guidance and exposure to different subjects before choosing a career pathway.

“You ask a lot of year 8 kids what they’re passionate about and they’ll just look at you blankly because they won’t know.”

Aspects of the overhaul were introduced last year, but disrupted by remote learning. Students at the college endorsed the new model.

Fadak Jabbar, a year 8 student who wants to be a teacher, revelled in the wide range of subjects to choose from this year.

“It allows us to narrow down our career pathways and focus on what we actually enjoy as a passion,” she said.