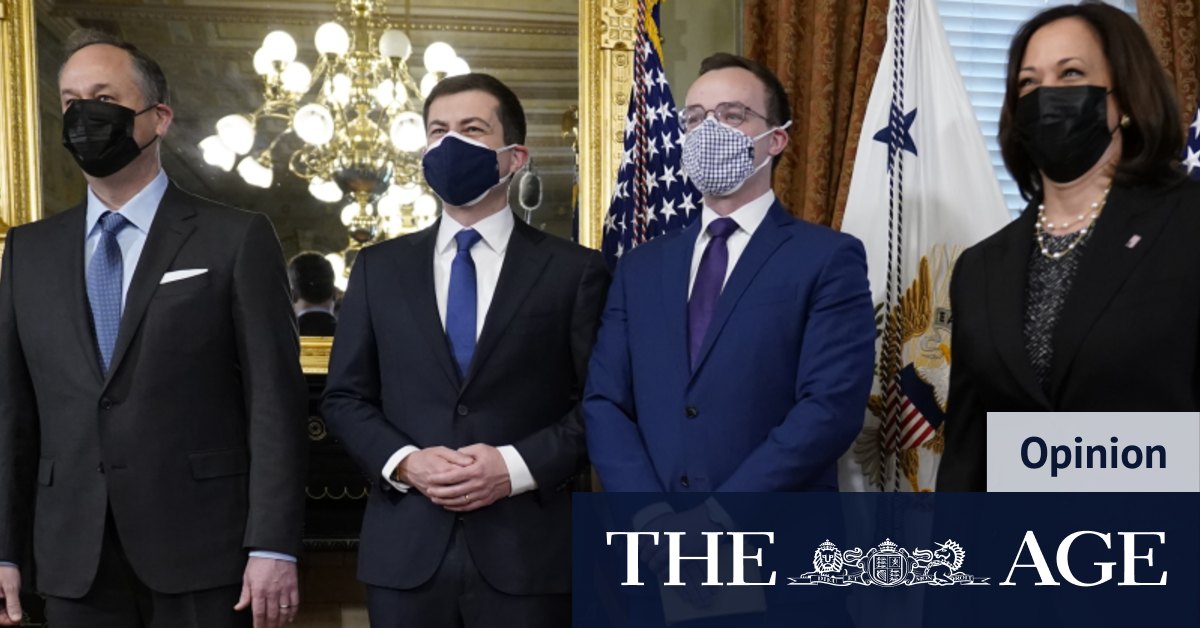 The White House website says he “will devote his time to the causes of justice, equality and human rights”; his first official solo event was a visit to a working farm at a DC middle school where he pronounced, “food security is a racial justice issue now”. He is likely to engage in many such soft ceremonial activities and hence be in the public eye as more than an accompanying spouse. And he also has a job. He resigned from his corporate law firm (too many potential conflicts) and now has a part-time teaching role at Georgetown Law School – but is not the first second spouse to be employed. That honour belongs to Jill Biden.

Chasten, 31, on the other hand, is having to learn Washington. He is setting up house in DC after the two of them moved from South Bend, Indiana where, of course, Pete used to be mayor. Chasten gave up his job as a Montessori junior high school teacher after he and Pete married in 2018 and now calls himself “a political spouse”. It’s a perhaps surprisingly traditional choice in today’s world, especially for a non-traditional couple.

He jumped on Twitter last weekend seeking “DC veterinarian recommendations” for the couple’s rescue dogs, Buddy and Truman. His feed was soon filled by other DC dogs welcoming the pooches (who, of course, have their own Twitter account) and recommending their favourite vets.

Chasten is a prolific and engaging tweeter who is likely to share his settling-in process with the entire world. Interestingly, a few days ago, he changed his Twitter name to include his former last name. Chaston apparently had few qualms about ditching the name of the family who’d brutally rejected him when he came out, forcing him to be homeless for a time. (He has since reconciled with his parents, but his brothers remain estranged). So far Chasten Glezman Buttigieg has given no explanation for the latest name change. This combination is common with American women (think Hillary Rodham Clinton) but it is rare for men to adopt their partner’s names on marriage.

Doug and Chasten have become friends, reportedly, and what an odd couple they make with their differences in age and backgrounds. It’s hard to see Doug, the cool one-time Hollywood entertainment lawyer who named his kids (from his previous marriage) after John Coltrane and Ella Fitzgerald, hanging out with the dorky guy who did not own a suit until his fiancee took him to Banana Republic so he had something to wear on their big date. Which happened to be the Obama’s 2015 White House Christmas party.

But they will doubtless find common ground in learning how to be the first at what they are doing.

It’s difficult comparing these men with the women who have filled these roles in the past.

It’s not just a matter of a change of gender. A man, and Doug in particular, enjoys an existential freedom that has simply not been available to Second Ladies, even one as role-bending as Jill Biden who also had a job. And a man who has once exercised considerable power has an aura he never loses – however much he defers to his wife. He is scarcely on the same planet as Karen Pence.

There has been no one like Chasten before so he will be writing his own rule book and who can say how it will work out. His husband enjoyed a quite extraordinarily warm reception from some of the crustiest Republican senators during his confirmation hearing seemingly signalling that these traditional homophobes have decided that the boundless opportunities for “pork” (think highways, bridges, rail lines, airports and so on) traditionally offered by the Department of Transportation trumps prejudice.

These norm-shifting couples raise pertinent questions about what other couples can aspire to. Why can’t a woman take on a big job that requires her partner to step back – and have men accept this? A big difference of course is that in neither case is there the complication of young children – although Pete and Chasten have said they want kids.

It is going to be a fascinating experience watching the two couples as they turn heads wherever they go because everything they do, at least for now, is without precedent: a bi-racial couple and a gay couple whose mere existence will force changes to protocols and prejudices.

Previous As it happened: Victoria records one new case on state’s first day of lockdown as Holiday Inn cluster grows; 2021 Australian Open to proceed with no crowds
Next Coronavirus strain found in Polish mink can pass to humans, government says