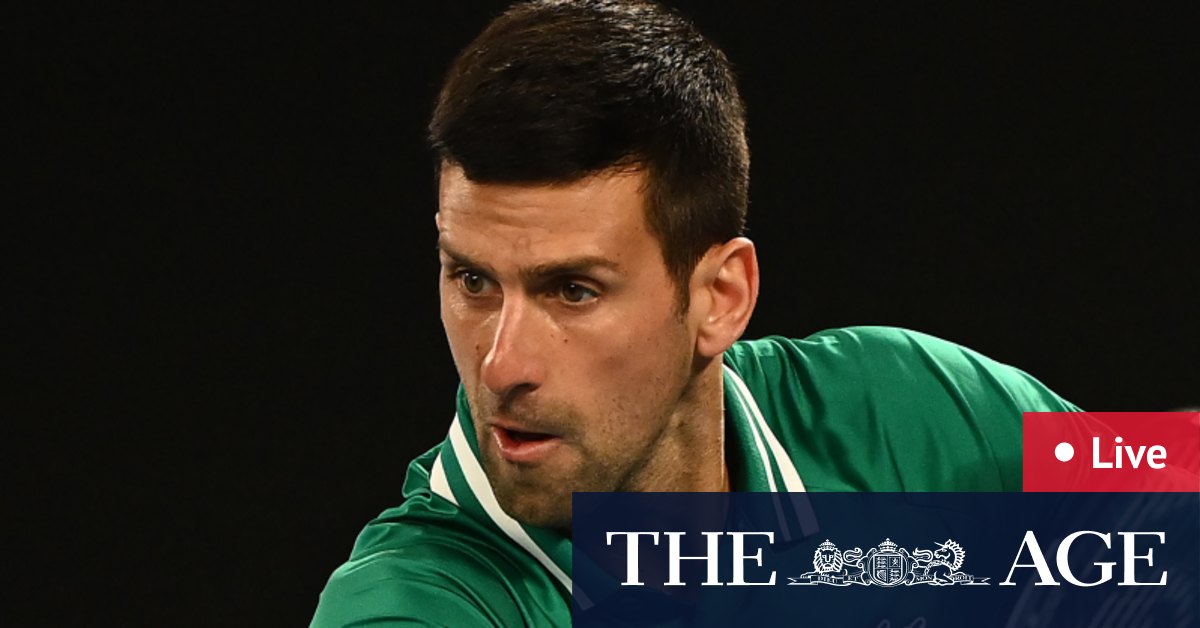 Thanks for following; it was a late one tonight but the world No.1 Novak Djokovic has won well and has set up a date with Alexander Zverev. That will be a cracker in a few nights’ time, as will the Simona Halep v Serena Williams clash.

Rafa is also down to play against Fabio Fognini in the afternoon.

Novak, another exceptional performance tonight. So impressive for everyone to watch and just give us your thoughts overall about everything, knowing what you’ve gone through since the match two nights ago with Taylor Fritz, your preparation. How do you feel about everything that happened here tonight?

Well, thank you. Well, there was no preparation basically for this match. I used every single hour that I had since I finished the last match against Taylor to recover, to try to put myself in a position where I have a possibility to compete. My physio has done a great job. My team and, of course, ATP physios and the medical staff of the Australian Open, I want to thank them for being there for me and, you know, giving their best under these kind of circumstances for me to try to get on the court. Look, you know, I was definitely fitter in the past. That’s as much as I can say. I’m kind of taking each day at a time. You know, for me more than training is recovery right now and trying to again put myself in a good condition to compete in the next match.

Well, if it’s any other tournament than a Grand Slam, I would retire, withdraw from the event, that’s for sure. But because it’s a Grand Slam and, you know, I want to give my best alongside with my team to try to recover and trying to get on the court, obviously I didn’t know before I finished my warm-up today, three hours before I entered the court against Milos here whether I’m going to play or not. When it warmed up, it was fine. Obviously during the match today it was kind of on and off. It’s not ideal, but I cannot complain, you know. I won the match against a great player and, you know, hopefully it’s going to be even better in two days. So let’s talk about the next match.

You play Sascha Zverev. You had some history obviously with him. He’s one of the young guns that’s been coming up, nipping at your heels, trying to push you, trying to make you a little bit better player, even if that’s possible. You have to – you’re always trying to figure things out, how you’re going to beat these guys, they create new challenges for you.

Talk a little bit about playing him and your history with him.

Well, Sasha and I, we get along really well on and off the court. He’s a great guy. We joked around yesterday that we have kind of similar injuries. He only has it on the other side. He was saying that if he’s watching this, maybe we’ll play without serve. That’s what he asked me, if we get to face each other in the quarters. You know, joking aside, of course he’s one of the top men’s players in the last five years. I mean, he has won the World Tour finals. He has been a top five, top 10 established player for quite a few years, right now even though he’s still young, but he has the experience. He has the big weapons, of course serve. He moves very well I think for his height and he’s got a very complete game. We played a very exhausting and close match in the ATP Cup coming into Australian Open. I’m expecting nothing less than a big battle that it was in ATP Cup. So let the better player win.

Absolutely. We’ll all be looking forward to that. Just to finish up, I want to let you go and get working on your recovery, take as much time as you can. I get a chance to sit right here to watch the match and people at home watching on TV, just want to say it is an absolute pleasure and honour to watch you work and do your job and we were all incredibly impressed with what you were able to do two nights ago, again tonight and it will be a pleasure to watch you compete against Sascha.

I appreciate your kind words. Big hug to everybody, thank you.

World No.1 Novak Djokovic is into the quarter-finals after defeating Milos Raonic in four sets.

The Canadian had never taken a set from Djokovic in a major, but he levelled the scores in the second set and made a real game of the fourth-round encounter.

But Djokovic clicked into another gear in the third set, shaking off any ligering symptoms from the suspected muscle tear suffered in the third round. He hit just 25 unforced errors to Raonic’s 35 and made better decisions at crucial moments in the game.

Djokovic will meet sixth seed Alexander Zverev in the quarter-finals after the German won in straight sets this evening.

Milos Raonic is on the verge of an Australian Open exit…

The big serving Canadian has saved one set point, but still trails 15-40 at 4-4 in the fourth set…

His next serve goes straight down the tee, but it’s long. The second serve goes at Djokovic’s body and the world No.1 can’t return it. 30-40.

His next serve hits the net. The second serve does to Djokovic’s backhand and after running Djokovic around the court, Raonic hits the net.

Djokovic breaks at 5-4 and will serve for the match.

The Canadian has mixed his form tonight. He looked on song in that second set and make Djokovic work for every point.

But the Serbian champion has simply been more consistent and more classy tonight.

Anyway, Raonic holds at 4-3 in this fourth set.

Raonic has hit five aces to one in this set, but has only won 25 per cent of his second serve points. Djokovic is waiting for those second serves and is taking advantage.

The world No.1 looks to be moving OK at the moment. Perhaps it’s adrenaline, but certainly in that second set he looked to be doing it tough. He’s found another gear late in this contest.

The world No.1 is hitting his straps and producing some shots from the top drawer.

With two break points on the line, Milos Raonic just smashed an ace down the tee. He still has one more break to save…

… and despite showing Djokovic a second serve, Joker hits an unforced error. It’s deuce at 1-1.

Novak Djokovic is one set away from the quarter-finals after claiming the third set in clinical fashion, 6-1.

He broke Raonic twice in the third set, smashing 11 winners to three and stepping up his game off Raonic’s serves.

It’s a second break to Djokovic in this third set, and he’ll serve at 5-1 to take a two-sets-to-one lead.

Djokovic hit two thrashing return winners to give himself a break point opportunity before Raonic found the net to send the world No.1 up 5-1.

Djokovic has raised his game this set.

He’s hit eight winners to three and has won 53 per cent of his receiving points this set.

Djokovic is back in the lead after breaking Raonic in the third set.

Raonic, interestingly, went down the tee with his serves and that allowed Djokovic to do what he does best – return in play and dictate the point.

Djokovic leads 3-1, with Raonic needing to break back soon.

Previous The Eddie McGuire paradox and the stories we tell about Australia
Next ‘If it wasn’t a grand slam, I would retire’: Djokovic reveals injury toll after booking quarters ticket