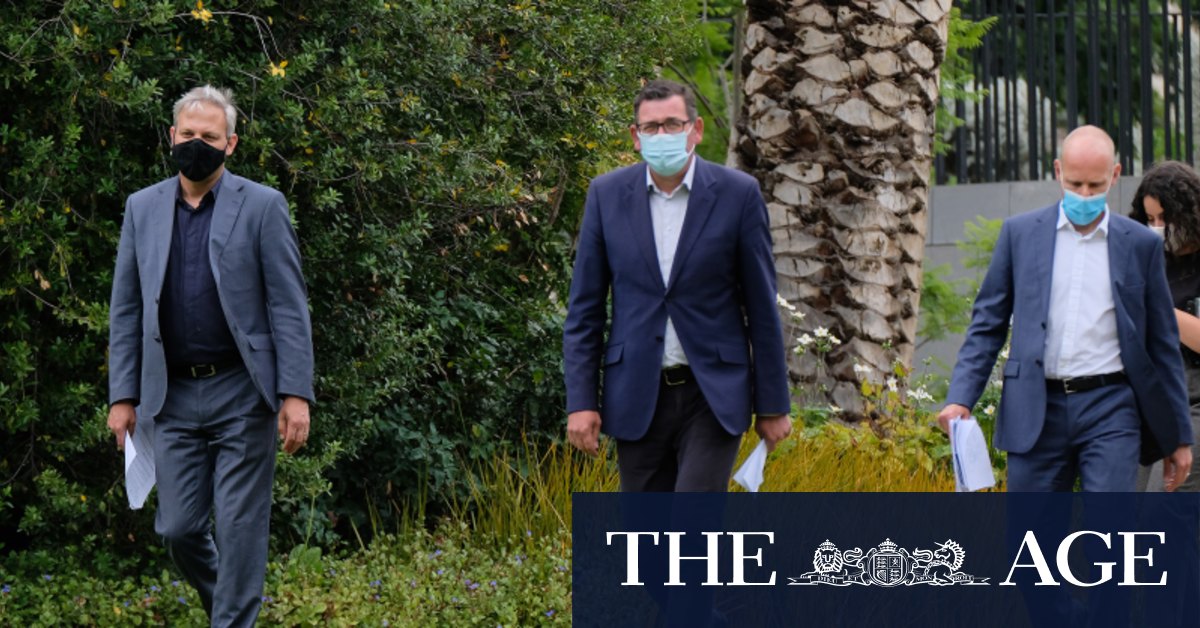 The state government has pointed to the use of a nebuliser as sparking the Holiday Inn cluster.

“When you look at the data, it is being used to some degree to say, ‘There is nothing we can do about this because it’s the UK strain,’ when in reality there is a lot you can do about it. Basic infection control procedures have not been followed, and that has resulted in either spread or outbreaks,” Professor Collignon said.

“Why was someone who needed a nebuliser – someone sick – going to a quarantine hotel instead of a medical hotel? And how come they could use it without anyone noticing?”

sought comment about Professor Collignon’s remarks from the Health Department and was referred to a transcript of Sunday’s news conference.

“This is 40 per cent more infectious than the previous variant,” Chief Health Officer Brett Sutton said. “We don’t want this very significant concern … to be in the community and transmitting.”

Professor Maximilian de Courten, director of Victoria University’s Mitchell Institute, said that while the British variant, known as B.1.1.7, is more infectious than earlier variants, “equipment error and human error are a far more likely cause of the current escape of the virus” in Victoria.

Professor Mike Toole, an epidemiologist at the Burnet Institute, pointed to similar claims about a “particularly sneaky … highly contagious strain” made by South Australian Premier Steven Marshall during his state’s recent cluster – also sparked by a quarantine breach.

It was revealed on Sunday that Victoria’s attempt to stamp out the new cluster was complicated by a hotel quarantine worker who had a family function at a Coburg venue on February 6 returning an “exceptionally rare” false-negative result on February 7. It wasn’t until after February 10 when the worker tested positive that all 38 people who attended the function were tested and isolated.

“It is highly unusual to get a negative test on someone who was later found to be positive and, in fact, transmitted to other people,” the Professor Sutton, said.

There was good news, with 30 negative tests coming back from the event so far and positive cases contained. The 12 close work contacts of a confirmed case who worked at Brunetti have all tested negative to the virus.

The Holiday Inn outbreak was linked to the British variant of COVID-19, known as B.1.1.7, which Premier Daniel Andrews has described as “hyper-infectious” and which now makes up 75 per cent of all cases detected in the state’s hotel quarantines.

The focus on the weakenesses of city hotel quarantine – Queensland and Western Australia recently ordered snap lockdowns after breaches – has led to growing calls from health experts and state governments for the federal government to build regional quarantine stations.

Professor Adrian Esterman, chair of biostatistics and epidemiology at the University of South Australia, said cities were not designed for quarantine. Staff working in regional quarantine stations lived on-site and if there was a leak, it was confined to the station and unlikely to spread to big cities. “It’s a no-brainer.”

The federal government, which has backed states continuing to use hotel quaratine, is on the verge of striking a deal to bring more Australians home via its facility in Darwin, but the increase in places may not happen for some months until the risk of cyclones eases.

The first 80,000 doses of the Pfizer vaccine are expected to arrive in Australia before the end of the week and Health Minister Greg Hunt said on Sunday he expected the Therapeutic Goods Administration to approve the AstraZeneca vaccine for use within days.

Quarantine workers around the country will be the first to receive coronavirus vaccinations with the rollout still on track to start by the end of February.

Business groups say the cost of Victoria’s five-day lockdown will be significant, with Victorian Chamber of Commerce and Industry chief executive Paul Guerra estimating the financial pain sparked by the lockdown would be “well north” of $500 million, and more likely edging towards $1 billion. The government said it was preparing a support package for businesses impacted by the shutdown of one of the busiest hospitality weekends of the year.