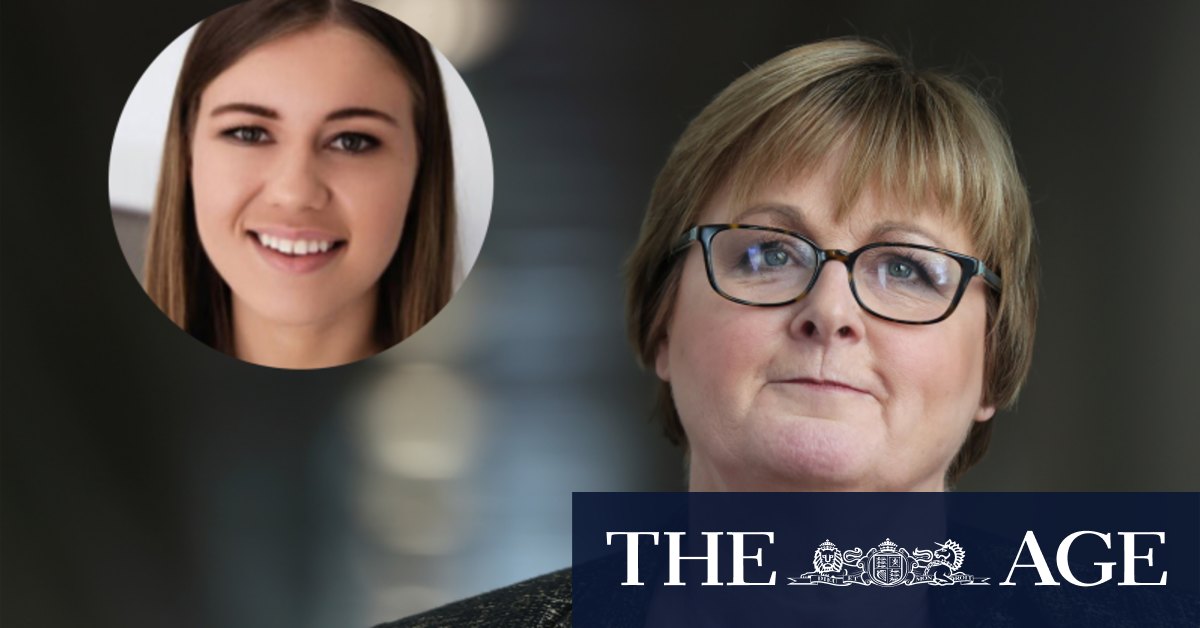 Ms Higgins also told the Ten Network on Monday night she had returned to Parliament House on a Friday night with a colleague after a function where both had been drinking. She said she fell asleep on a couch in the minister’s office and awoke to find the colleague on top of her.

“I woke up mid-rape, essentially,” Ms Higgins told The Project.

She said she told the colleague to stop “at least half a dozen” times but he did not.

In claims that go beyond the rape allegation to question the treatment of women within ministerial offices, Ms Higgins said she did not get enough support from Senator Reynolds or the minister’s acting chief of staff.

At one point, Senator Reynolds and the acting chief of staff set up a meeting with Ms Higgins in the same office where the alleged rape occurred.

“It became a topic that was really hard to raise with her and she was sort of my only point of contact in terms of HR or anything, my only person I could go to,” Ms Higgins said of the acting chief of staff.

“The minister clearly didn’t want to hear about it anymore.”

“And it was dismissed, it was played down and it was made to feel like it was my problem.”

One source familiar with some of the internal correspondence, but who was not authorised to speak on the rape allegations, defended Senator Reynolds’ acting chief of staff for the support shown for Ms Higgins.

A government spokesman confirmed that on March 26, 2019 Senator Reynolds’ senior staff “became aware the office was accessed after hours and that an incident had occurred” involving two staff members. It was initially treated as a breach of the ministerial staff statement of standards.

“After further consultation with Ms Higgins over the following days, it became clear to senior staff that there were previously unknown elements of the incident that may be of a more serious nature,” the spokeswoman said in a statement.

Ms Higgins also made an “unofficial statement” to police in early April but ultimately decided not to pursue an official complaint.

She told The Project she felt she had to choose to protect her job and career by not pursuing the complaint.

Prime Minister Scott Morrison and Senator Reynolds separately told Parliament on Monday women should feel safe in their workplaces at all times.

“My only priority throughout this matter was the welfare of my then staff member and ensuring that she received the support that she needed,” Senator Reynolds said.

“That included ensuring that she was clear about the support available to her and her right to make a formal complaint to the Australian Federal Police should she choose to do so.”

Mr Morrison said the matter was “under consideration” by police.

“The government has aimed to provide Ms Higgins with her agency, to provide support to make decisions in her interests and to respect her privacy,” he said.

The Department of Parliamentary Services said it had had “extensive consultation” with the AFP on the matter.

“The relevant security camera footage relating to this incident was viewed by the Australian Federal Police in April 2019 and has been stored on an ongoing basis at the direction of the Presiding Officers and with the agreement of the AFP for their access as required for any investigation,” a DPS spokesman said.

Ms Higgins told The Project she had asked to see the footage several times because she knew others had seen it, but she said her request was denied.

“It really hurt. It felt like a betrayal for them to withhold this one really small thing they needed for myself to process to move on or just to understand what had happened to me,” she said.

“It really upset me.”

Former Liberal advisers Dhanya Mani and Chelsey Potter, who have previously spoken out about their own sexual assaults by fellow party members, said they heard the same kinds of responses again and again.

Ms Mani said it was a frustrating cycle where a woman spoke publicly about her experience, received a “tokenistic response”, then the government rode out the wave of scandal and nothing changed.

“If processes existed that worked, these things wouldn’t happen and we wouldn’t be in a position where we feel that we’ve got no option left but to leave and then try and advocate so that women don’t have to go through the same thing,” she said.

“All that happens time and time again is that the woman’s career is collateral damage and falls apart and she needs to leave with enduring mental health issues … before she’s able to do anything about it or say anything.”

Ms Potter said if the government didn’t think it had a problem, it wasn’t paying attention to its own female members.

“What’s it going to take? If they’re saying this about rape, I shudder to think what it’s actually going to take for them to do something.”

The Liberal Party updated its code of conduct for handling complaints just over a year ago, but it was slammed as ineffective and unenforceable by women in the party. Ms Potter said if she had read it at the time she was deciding what to do, it would have reinforced her decision not to make a complaint.

Cabinet minister Ken Wyatt said the party had to do better.

“AFP are involved, they need to take the actions that are necessary and we will await the outcome of that, but we have got to do things better,” he told the ABC.

Liberal backbencher Katie Allen also said if there needed to be more complaints processes to ensure workplaces were safe “then that would be an important thing to be undertaken”. Her colleagues Jason Falinski and Fiona Martin praised Ms Higgins’ bravery in speaking out.

“We must be strong in our absolute condemnation of abuse, harassment and discrimination… To all survivors, you are not alone,” Dr Martin said.

Previous Cricket’s ‘big three’ could be only three, fears Smith
Next It’s Barty at the double with win over Shelby Rogers