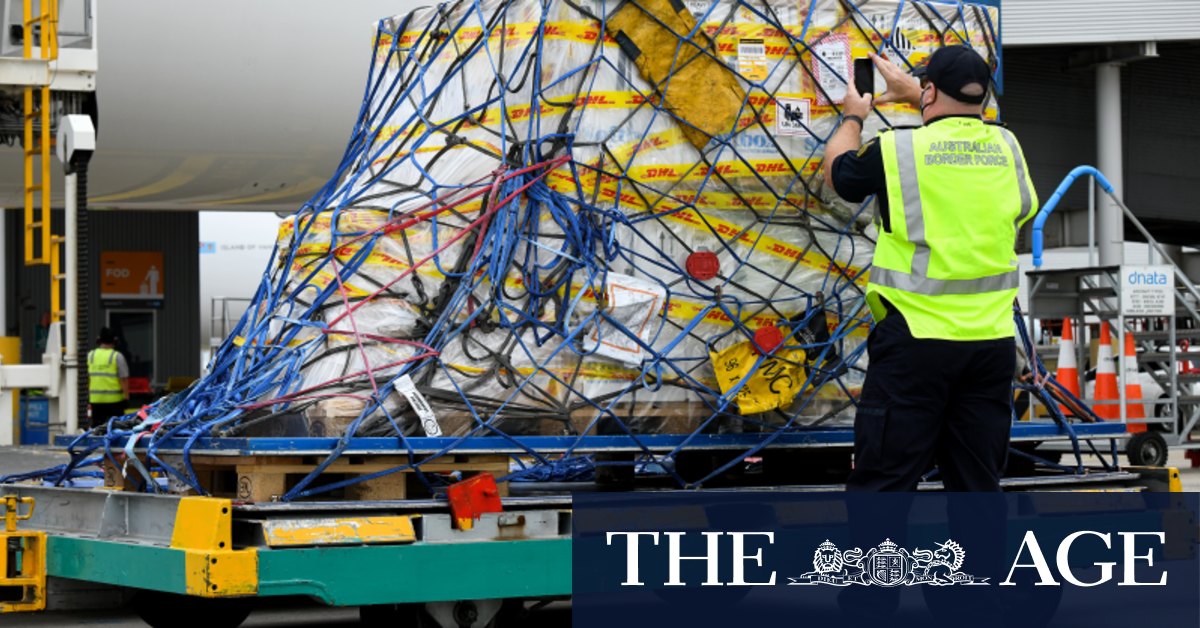 Federal Health Minister Greg Hunt said Monday was another important milestone in the country’s vaccination program, ahead of the first vaccinations beginning next week.

“With those milestones we give Australians hope and protection,” he said on Monday afternoon.

Victoria recorded two fresh cases of coronavirus on Monday, the third day of the state’s five-day “circuit-breaker” lockdown which was introduced after the virus infected hotel quarantine workers at the airport Holiday Inn and escaped into the wider community.

States will receive 50,000 doses and the federal government will distribute a further 30,000 for aged care staff and residents, while setting aside 62,000 doses for second vaccinations as phase 1a of the vaccination program begins.

On Tuesday, consent forms will be distributed to aged care facilities and those residents and aged care workers included in the first week of the rollout are being contacted so they can prepare for their vaccination.

The aged care doses will cover more than 250 facilities across the country, including regional and metropolitan homes.

On Monday evening, Victoria’s Health Department confirmed it was expecting to receive between 11,000 and 12,000 doses of the vaccine a week initially – dependent on supply. That number is expected to increase as more Pfizer vaccine reaches our shores.

AstraZeneca’s vaccine will be available in March, pending approval by the drug regulator.

The Australian Medical Association estimates there are about 170,000 Victorians included in the first phase of the vaccine rollout.

Julian Rait, president of the Victorian branch of the Australian Medical Association said he had been told Victoria would receive 11,000 doses of Pfizer’s two-dose jab every week for seven or eight weeks – a total of 77,000 to 88,000 doses.

“And as a consequence, there is going to be some rationing,” Professor Rait said.

Professor Rait said there were 170,000 Victorians who were expected to receive a vaccine as part of the phase 1a rollout, which includes aged care workers, vulnerable residents of aged care facilities, hotel quarantine workers, border staff and essential health care workers.

“That is insufficient to immunise everybody, especially when you consider that you have to provide a second injection… Within 21 days,” he said.

Victoria has already said it plans to immunise border and quarantine workers first, with high-priority healthcare workers next. The state is planning to set up nine COVID-19 vaccination hubs, with the ultra-cold freezers needed to store the fragile vaccine.

The federal government’s vaccine plan does not specify which medicos are considered frontline health care workers – leaving some medical groups concerned their members may miss out.

Suzi Nou, president of the Australian Society of Anaesthetists, said several of her members had been told they would not be part of the first phase of the rollout, despite having jobs that exposed them to COVID-19.

“It just seems really unfair you have everyone else in the COVID team from the emergency department or the intensive care unit vaccinated,” she said.

So far she had “zero clarity” on how many of her members would be vaccinated and when, despite writing multiple times to federal and state governments.

Mark Suss, an anaesthetist working across several Melbourne hospitals, said he was regularly exposed to COVID-19 in his role.

“The issue is we work very closely with intensive care and emergency department doctors, who are clearly stated to be in group 1a. When we’re on call, we attend every intubation in the hospital. By definition, we do as many aerosol-generating procedures as everyone else,” he said.

Mr Hunt said it was up to the states to states to decide which groups from phase 1a phase would take priority.

“They have indicated – and we generally support it – that the greatest immediate risk is the border quarantine process,” he said. “They will make sure that the balance is focused on the greatest risk, and I think that’s appropriate.”

“Quite honestly it’s practical and sensible, they’re the ones who are most exposed in Australia to COVID,” he said.

Mr Hunt expected the first phase of the rollout to take six weeks. Professor Booy said essential healthcare workers would not miss out by more than a week or so.

“Now that we’ve got enough for 10 million people we can cover all of those risk groups very well,” he said.

The Australasian College of Emergency Medicine also supported putting hotel quarantine workers at the front of the queue.

“We believe we need to vaccinate border and quarantine staff first, as that is where most of the cases are coming from,” ACEM President Dr John Bonning said.

A spokeswoman for the Australian Nursing and Midwifery Federation said it had been told all staff who worked in intensive care and emergency departments, as well as COVID or suspected COVID wards, would be part of the phase 1a rollout. Nurses involved in vaccination and testing would also be part of phase 1a.

“We understand that the rest of the healthcare workforce is next in line under Phase 1B and there are no concerns about members missing out on vaccination at this stage,” she said.