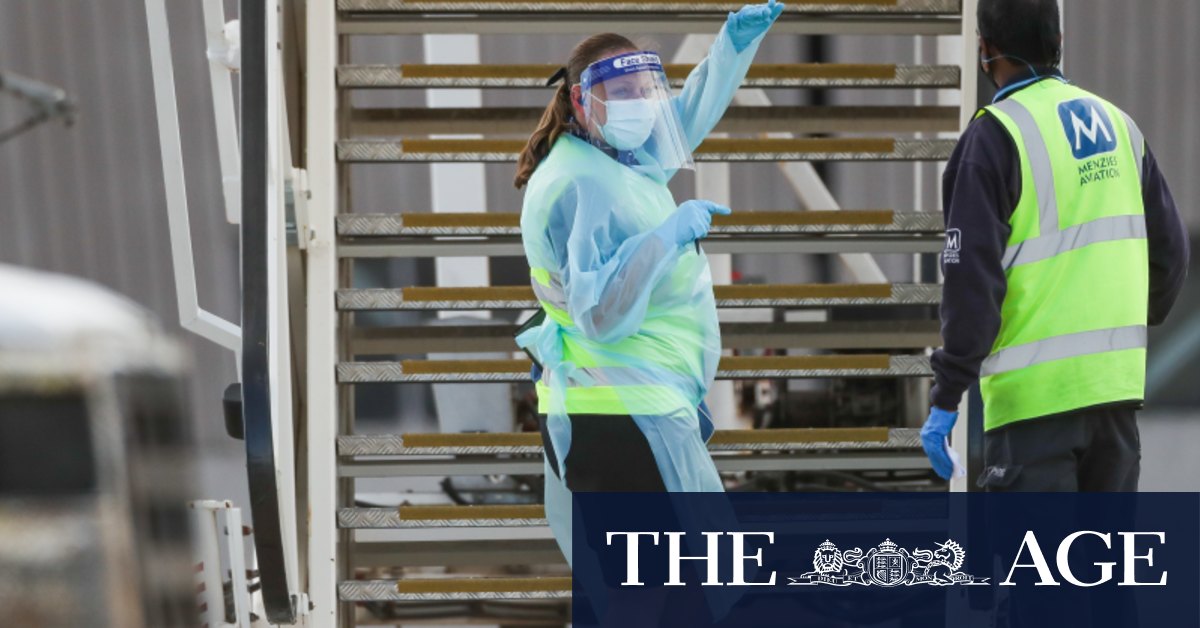 Mr Andrews announced on Wednesday morning that the lockdown would end at 11.59pm on Wednesday, after Victoria had recorded no new coronavirus cases overnight.

The improvement notices were issued to the Health Department (formerly the Department of Health and Human Services) and CQV, the government agency charged with running the hotel quarantine program.

The Age and the Herald confirmed WorkSafe inspectors had some concern about the movement of quarantine staff between “red” and “green zones” at Terminal 2 at the airport.

In quarantine facilities, red zones are where potentially infected returned travellers pass through. Staff in red zones are required to wear full personal protective equipment. Green zones signify safe areas in the quarantine environment where staff do not have to wear PPE.

Officials from both agencies were given written instructions on what needed to be fixed and by when.

The next step up from an improvement notice from WorkSafe is a prohibition notice. Had one of these been served on the Health Department and CQV in relation to their protocols at Melbourne Airport, it could have led to a temporary shutdown of parts of Victoria’s hotel quarantine system.

A spokeswoman for CQV said work was under way to build a new workspace in Terminal 2 to improve on already stringent controls over staff movement between red and green zones.

“CQV has implemented a range of additional measures to restrict the movement of staff between red and green zones at the Melbourne Airport. This includes ensuring that staff in Terminal 2 red zones are only permitted to leave the area to attend staff offices and testing sites,” she said.

“Further work is under way to construct a separate workspace to ensure that staff will have no need to move outside Terminal 2 in the future.”

“We will work through those issues. We believe they have already been resolved in the main,” he said. “I think it is very important that we do not have a situation where any of us are anything other than focused on safety.”

The Premier on Tuesday foreshadowed plans by his government to examine shifting quarantine accommodation to purpose-built facilities at either Melbourne Airport or Avalon Airport near Geelong.

The Age and the Herald revealed on Wednesday that WorkSafe had received complaints about workers and doctors in Victoria’s quarantine hotels, including the Holiday Inn, moving between multiple hotels and offices, in breach of the recommendations of an inquiry into the scheme’s failings.

The Coate inquiry into the state’s hotel quarantine program recommended in December that “every effort must be made to ensure that all personnel working at the facility are not working across multiple quarantine sites”.

However, employees at Healthcare Australia, which provides medical services in “cold” hotels, have made formal complaints to WorkSafe Victoria because hotel operations managers and leaders of clinical teams have been attending the company’s St Kilda Road office on the same days that they enter quarantine hotels.

A CQV spokeswoman confirmed a “small group” of employees moved between hotels and another office, but said they had only entered hotel “green zones” and had no interaction with guests.

The spokeswoman also insisted doctors and nurses worked exclusively at one hotel.

Richard Baker is a multi-award winning investigative reporter for The Age.

Previous As iPhone adapts to COVID normal, update alters face unlock and emoji
Next Howard Springs builders could get Victorian village up in four months