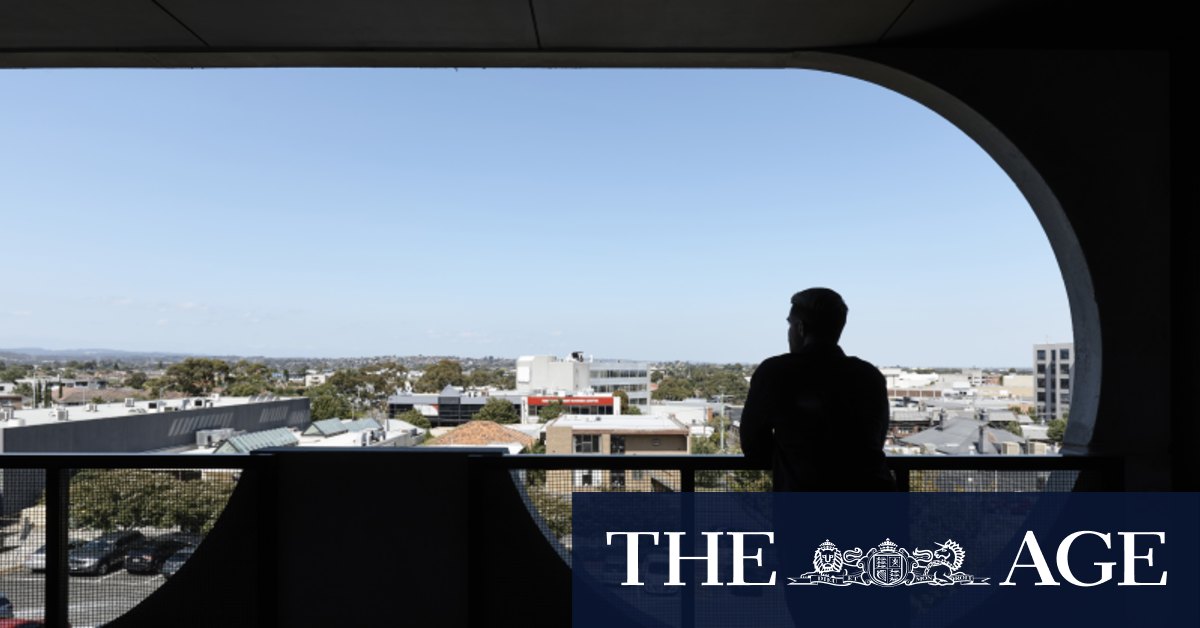 Kennedy Nolan Architects decided from the outset to create a building that was imbued with civic presence, as much as something that was robust and low-maintenance.

A public car park sits to the immediate eastern side, so the architects were keen to design a fairly bold and abstract elevation on this front, one that can be seen from a significant distance.

So, within the four levels above the parking and foyer at grade level are a series of abstract forms cut into the concrete panelled walls.

One of these overscaled apertures is in the shape of a set of goggles or binoculars that frame distant views over suburbia.

“It’s not dissimilar to the suburban perspective celebrated by artist Howard Arkley,” says Nolan, who drew inspiration for HCA Dandenong from the colours of the surrounding terracotta roofs.

These abstract shapes also reduce the scale of the building, particularly when combined with the ‘floating’ black steel parasol-style roof.

Kennedy Nolan Architects was also mindful of creating a community of elegant and sophisticated design.

There are also strategically placed benches, including an external seating area that allows residents to catch up.

The main staircase, framed with steel-mesh walls, also encourages people to stop and chat. This protected but external stairwell also offers continual cross-ventilation and a connection to the outdoors.

“We were mindful of clearly delineating the private from the public realm,” says Nolan, who feels the two domains can often be inappropriately blurred.

“There are balconies but these are lightly ‘veiled’ rather than having everything on view.”

At various points in the communal areas, such as the lobby and passages, are what’s referred to as ‘touch points’, features that add another layer to the apartments: timber battened walls and in the case of the lobby, graphic tiled walls in muted colours such as olive and orange, to add a sense of warmth and texture.

“We have used a restrained palette of materials (concrete, steel and glass), but wanted to include that sense of craft,” says Nolan.

Pared back and simple

There are 15 two-bedroom and four one-bedroom apartments. The treatment of the interiors is pared back and simple.

“Sometimes, you can be over-prescriptive when designing interiors,” says Nolan.

“Here, it was important for residents to make it their own, rather than be restricted in the way the floor plans or colour palette is conceived.”

The garden was also a large consideration in designing HCA Dandenong.

While the brief from HCA was to increase the density of the site, this hasn’t been to the detriment of design.

Now a landmark in Dandenong, it shows what can be achieved when a sense of place is at the forefront of decision making.

“Most people who first come across this building are simply curious,” says Nolan.

“The abstracted binocular shape may give you a sense of being watched as much as being a viewing platform for some of the residents living here.”