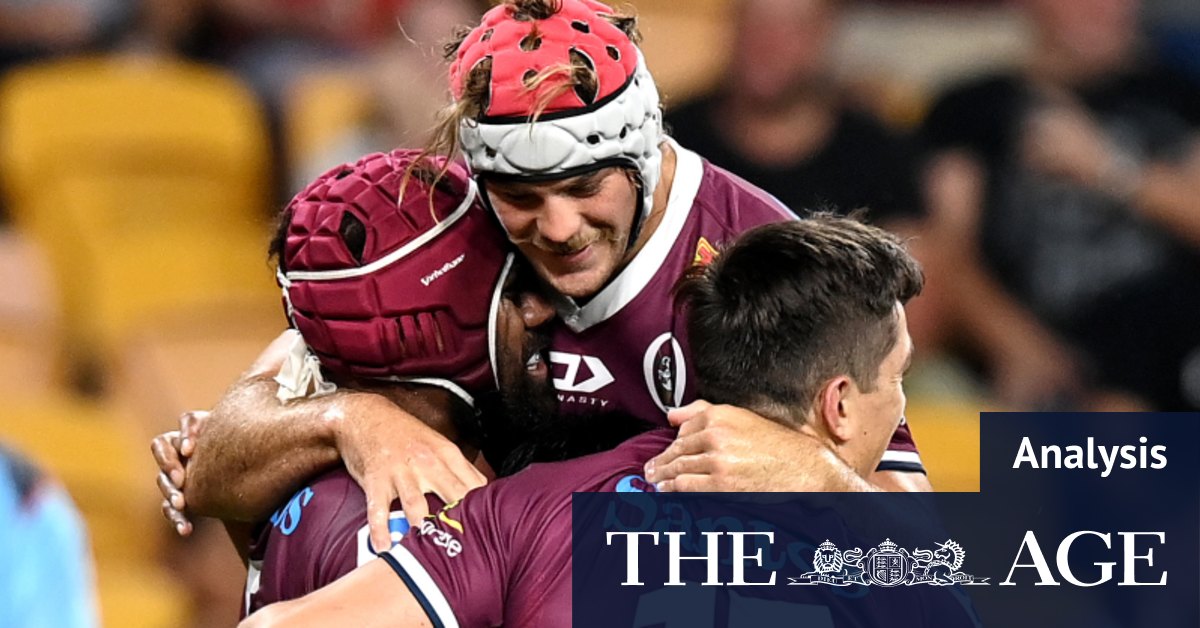 The first 15 minutes of the stream was Stan Sport’s time to shine before the match started on Gem. All Blacks great Andrew Mehrtens, former Wallabies coach Michael Cheika, triple international Allana Ferguson and host Nick McArdle began the coverage smoothly, save for a Jack Maddocks live cross that came around 15 seconds later than anticipated. But it didn’t matter.

Viewers got to see Nine’s new studio for the first time. And it’s big. So big that after one segment Mehrtens walked five or so metres back to the desk while the cameras continued to roll.

There were new graphics, unique camera angles and an “analyser” touch screen, which was used by Ferguson and Australia’s leading Test try-scorer David Campese before kick-off to offer deep analysis of the game.

At half-time, Cheika explained what would have been going through the mind of Queensland’s James O’Connor, while illustrating his comments using a futuristic touch screen, a segment that was not only something new but also absorbing.

Even a video package of Reds youngsters Liam Wright and Harry Wilson on the club’s “Reds To Regions” tour earlier this year got a decent run. No amount of social media posts can get the exposure that free-to-air television brings.

The team at Suncorp Stadium in the commentary box – Sean Maloney, Tim Horan and Morgan Turinui – were polished and brought great energy, as did Roz Kelly on the sideline.

The broadcasters were also able to show off their new toy, a “cine-camera”, which is thrown into try celebrations with the effect of blurring out the background. A similar camera has been used in the NFL.

Nostalgic video montages of Super Rugby matches and classic international moments served to highlight the point that this could be a new era for the struggling code, at least on the screen.

Featured in the montage was footage of Reds coach Brad Thorn during his All Blacks days. Shortly after, the commentators crossed to the dual international in the sheds for a quick quote with his side up 27-7.

Talk about access. And this from a coach famed for his reluctance to let broadcasters near his team’s inner sanctum.

Stan Sport may need to fix some teething problems with its streaming quality – judging by complaints on social media – but the feedback also suggested the picture quality was crisp on different devices.

As McArdle explained, Cam used to play rugby for the Penrith Emus and even built the club’s barbeque there 30 years ago.

If rugby wants to bring back those kind of closet supporters – ones who once loved the game – Friday evening was certainly a step in the right direction.