Waratahs suffer key injuries in lop-sided loss to the Reds 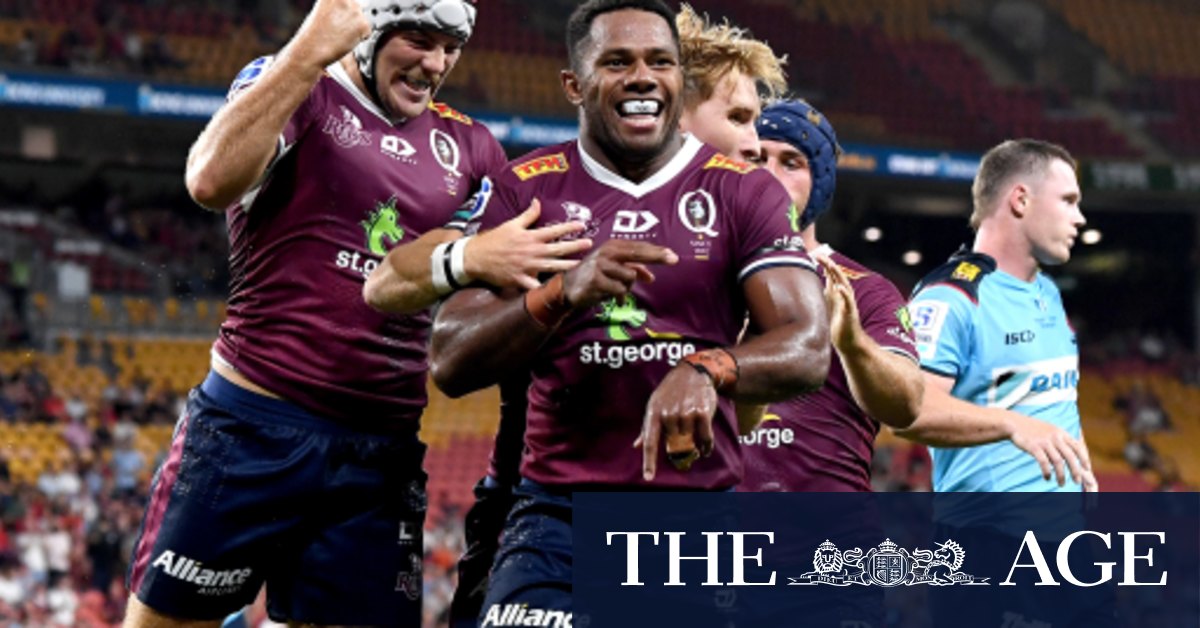 Waratahs coach Rob Penney said Gordon had suspected syndesmosis and was on crutches after the match.

“Jake has a bit of an ankle injury. It’s hard to say, it looks like a high ankle sprain but it’s too early to tell. He’s on crutches. He’d be a big loss. It wouldn’t be great for us, he’s our new captain. But someone will step up,” Penney said.

Penney said there were moments of defensive bravery during the match, especially when NSW were down a player, but the overall performance was well short against a high-octane outfit like the Reds.

“There were moments there. Obviously we had a pretty ugly 10 minutes . . . at 21-7, then the red card occurred. Not to concede another point for that 20 minute block was very courageous. But we certainly weren’t good enough today.

“We let the ball go cheaply, we made errors and had some defensive howlers, guys not reacting well enough. We had some weak moments mentally that really cost us. We got exposed.”

The Waratahs did have their moments but they were largely limited to the opening few minutes of the contest. They arrived buzzing with energy, putting the Reds on the retreat as Jack Maddocks popped one off the deck to set up Gordon in the corner.

A 7-0 lead with the Reds barely having a touch was a dream start before their momentum departed and never returned. A James O’Connor penalty and a try to Jock Campbell, which was looked at by the television official and cleared of a forward pass, put the home side up 10-7 and they were off to the races.

Alex Mafi smashed his way over from close range, reverse dunking the ball over the line, for a second Reds try, then Filipo Daugunu was set free down the left wing to race clear, avoiding the desperate ankle tap of Jack Dempsey, to have the Reds in complete control inside of 20 minutes.

The Waratahs had every right to get frustrated, but former Reds man Perese produced a moment of madness against his old province. Paisami had already lost the ball when Perese tipped him on his head, leaving officials no choice but to reach for a red card.

Queensland had a 27-7 lead at the break and continued to press hard at the start of the second, but the crisp short passes that were slicing the Tahs apart in the first half were missing their target. Players were dummying when they should have let it sing, or passing it when patience was required.

The quality had fallen off from both sides after the manic opening burst, which may have been symptomatic of the first outing of the season. With 20 minutes left, the Reds hadn’t crossed since the 18th minute but the Waratahs were struggling to get any meaningful look at the Queensland line.

When they did, the Reds defence was more than up to the challenge, while the Waratahs were lacking vision and creativity in their attack. With no Michael Hooper to marshal the troops, they failed to consistently test the Reds defence, while Queensland were beginning to catch their second wind.

The new and retained rules for the season did get some use. The Reds were sent for a goal line dropout in the first half after Gordon was held up over the line, while O’Connor sent one long for the first 50/22 to set up another Queensland raid.

This time, they managed to turn possession into points as Dauguni ran off the hip of Moses Sorovi to gallop clear and put it down under the posts. It was now 34-7 to the Reds and getting into blowout territory for the Tahs.

That became the case when Ilaisa Droasese soared into the corner on debut near the final whistle to score his side’s fifth try and give Brad Thorn’s men the perfect start to the season.

Previous Too often Facebook’s view is: “It’s not our problem”
Next Sizzling second half from Saints keeps Cats winless