Breaking News
Home / National News / ‘Impossible to believe’: The maps at the heart of furore over developer’s land grab

admin February 24, 2021 National News Comments Off on ‘Impossible to believe’: The maps at the heart of furore over developer’s land grab 16 Views 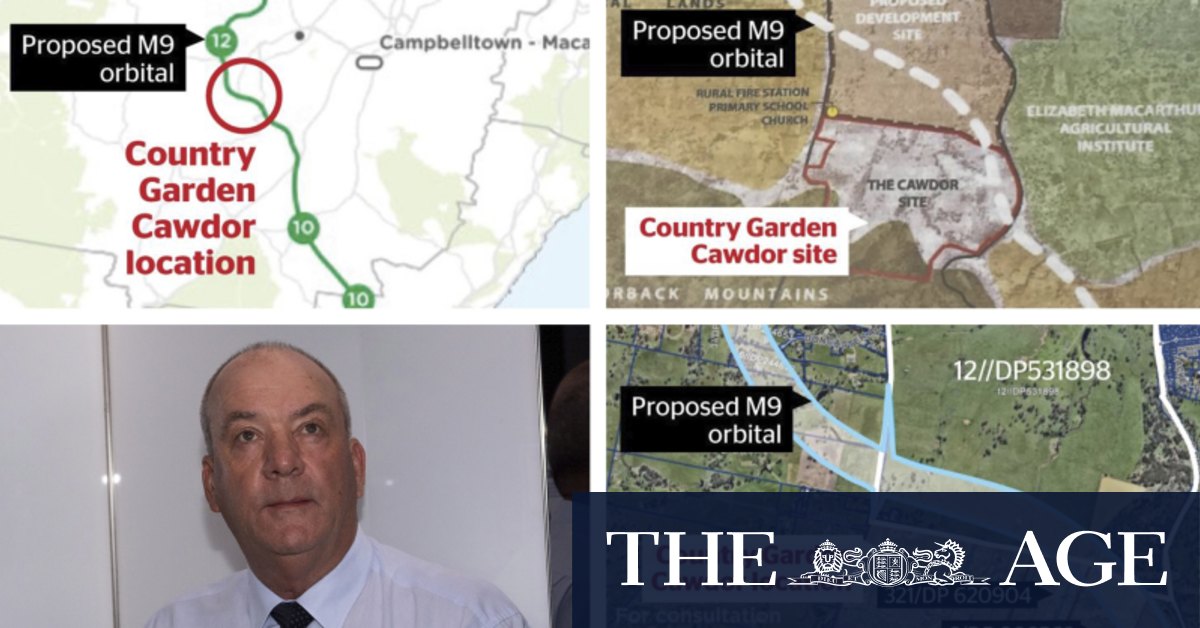 It included the map in a December 2017 letter lobbying planning authorities to build a motorway interchange at the site.

When the motorway route was publicly unveiled three months later, in March 2018, the detailed maps released by Transport for NSW showed the motorway running through the same north-eastern corner of Country Garden’s property – prompting politicians to dub the company the “nostradamus” of developers.

By now, alarm bells were ringing within the government. Transport for NSW executive director Tim Raimond was ordered to get to the bottom of the leak by a senior colleague.

“Chinese investor buying up land – who has been talking to who?” he wrote of the conversation in a file note tabled to parliament. “What MPs being briefed, how did Daryl Maguire get that info”.

A month later Mr Raimond was still on the case. He checked in with Transport for NSW’s director of corridor preservation Geoff Cahill.

“Rachel Simpson has contacted me and asked if we have spoken to Country Gardens during the corridor identification process,” Mr Cahill wrote in a reply to Mr Raimond. “I advised that I believe we did not and no one in the team has.”

Since the saga came to light in the Herald this week, Transport for NSW has now dismissed suggestions Country Garden was ever leaked sensitive government information despite the concerns of its own bureaucrats.

“The action item for Mr Raimond was a result of media reports. Further enquiries concluded that the information in these reports was publicly available,” a spokesperson said.

When pressed on where the information was publicly available, the Transport for NSW spokesperson pointed to the original map in its draft Future Transport 2056 strategy.

“The study area for the alignment was released for community consultation in 2015,” the spokesperson said.

“A high level alignment was included in the draft of Future Transport 2056, released for public comment in October 2017.

“The Country Garden map does not correspond with any map released by Transport for NSW, or with the final exhibited alignment.”

One Nation MP Mark Latham slammed the Transport for NSW response, arguing it was “ridiculous” to suggest that Country Garden could have determined the route would run through its property from the high level map released in 2017.

“The 2056 document is all futuristic broad brush, with no street names or identification in the Cawdor district,” he said.

“It’s impossible to believe Country Garden took these maps and could accurately conclude the M9 motorway was cutting through the north-east corner of its Cawdor property.

Mr Latham, who obtained internal documents on the saga through parliament, compared it to trying to convince the public “black is white and white is black”.

Mr Latham also questioned why Transport for NSW bureaucrats continued to investigate the leaking of the route over several weeks if the information was publicly available all along.

“If that’s the best they can spin it they’ve got a long way to go,” he said.

The matter will be scrutinised at budget estimates hearings in parliament on Thursday.

Country Gardens, which is now known as Risland Australia, has denied it received any inside information about the route, also arguing it relied on public information. A spokesperson denied that Daryl Maguire had any involvement with the purchase of the site.