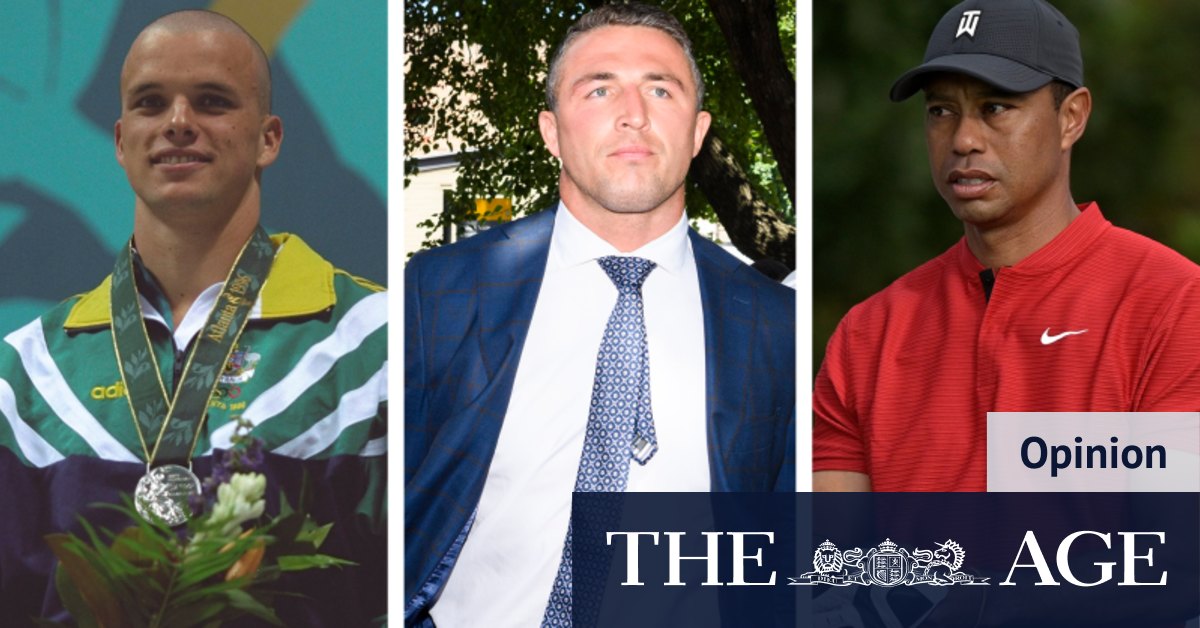 Miller missed out on a gold medal at the Atlanta Olympics by 0.36 seconds but returned to Australia as the toast of the nation. He was arrested last week on drug-trafficking charges. Sam Burgess the dual international was one of the finest league players we’ve ever seen and most famously led the Rabbitohs to victory in the 2014 grand final. Since retiring two years ago he has mostly made headlines for the bitter fall-out from his marriage breakdown, including his wife taking an AVO out against him, and being found guilty of intimidating his former father-in-law. On Tuesday he was arrested and charged with driving offences, allegedly having cocaine in his system while driving to pick up his kids.

As to Tiger Woods, an all-time global sporting great, quite what was behind his high-speed-one-car-only crash just outside Los Angeles on Tuesday remains to be seen. But again, Woods going off the rails with a car involved has happened so often it is close to a cliche in itself. In 2009, just after his wife had found out he had been committing adultery on a global, industrial scale he drove his Cadillac into a fire hydrant in the wee hours, while in May 2017 he was pulled over on a deserted Florida backroad at 3am after driving erratically and proved to be doped to the eye-balls on substances unknown. The image of his mugshot, showing the vacant and deeply sad eyes of a man completely lost, still haunts.

In Woods’ case it was quite stunning that he was able to come back from that low to win the Masters two years later – probably sport’s greatest comeback story ever – but prima facie this latest episode looks to be one of the most tragic “head-backs from a comeback” we’ve ever seen.

What ails these blokes?

What fails them, to seemingly have it all, including everyone wishing them well, doors opening for them with but a single interested glance, only to show up in police mugshots?

Another recent example out of America is two-time Olympic gold medallist Klete Keller who seemed to have the world at his feet after his triumphs in Athens and Beijing only to have been one of those arrested for the January 6 storming of the US Capitol. He is now facing three serious federal criminal charges. In his case The New York Times has documented how the road from the top of the Olympic podium to the prison cell included relationship breakdowns, family estrangement, unemployment, and finally an embrace of conspiracy theories, perhaps just to be a part of some community, any community that would still have him.

I repeat, what ails them?

A friend, Mark Morgan, who used to be an elite swimming coach and was in fact tangentially involved with Scott Miller as part of the Forbes Carlile outfit in Miller’s glory days has a theory, having watched it closely over the years, including from close-up, as other swimmers have lost their way.

He calls it “Elite Athlete Syndrome”, the tendency of those who make it to the sporting penthouse to find their way to the police shithouse in record-breaking time. He notes the common traits:

Me? I think he’s onto something. All of the aforementioned can find their way back. In the meantime, caveat emptor to all those who seek to buy into a life of sport alone, all too often leaving emptiness when the sport is going, going, gone.

Why Roosters rookie Walker needed a needle to make debut