COVID not only restricted travel, but also changed the direction for the fit-out of the Armadale store. 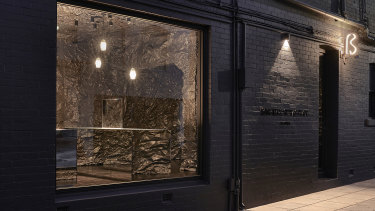 This fit-out, although driven by a budget, punches well above its weight.Credit:Sean Fenness

Initially the concept was predominantly concrete, creating a design link to the Sydney stores.

However, with a downturn in the economy and a cautious approach, the budget was significantly reduced.

“You know the old adage, innovate in a downturn, reinvent yourself and look at something new,” says George.

While Gittoes and Grynkofki weren’t prepared to change the direction of their fine jewellery, establishing an important niche in the market, they were open to exploring ideas that went beyond concrete.

Most of the former fit-out was removed, including fixtures such as basins.

However, some elements, such as the former fireplace, was simply concealed by a crushed foil installed by Russell and George.

“The conservation started with the idea of a cave, in particular the quality of light that pierces through to the ocean,” says Russell, who took the initial design cue from Sarah being a regular ocean diver, along with a quote from Japanese poet Naoshi Arakawa saying “even in the depths of the darkest ocean sunlight always pierces through”.

When this unusual foil was installed, crushed by hand and applied over a number of layers (not dissimilar to sculpting clay), the effect was dazzling, but perhaps too glitzy or, as Ryan says, ‘clinical’!

So, the guys painted it entirely black, along with the timber floor which was also stained black.

With this recessive and sculptured interior, the focus then became the three ‘floating’ mirrored cabinets, two of which allow the jewellery to be displayed and stored.

The third unit that doubles as reception/point of sale also functions as a workbench where on occasion, items such as bracelets are soldered onto a client’s wrist.

Although this is a modest store, there was sufficient room to include an intimate nook at the rear, concealed behind a crushed covered foil door that’s used as a consulting space.

Complete with curvaceous customised steel benches designed by Kate Rhodes of Coco Flip, it’s a place to focus on jewellery and is illuminated by smoky glass pendant lights designed by Mark Douglass.

“The glass [lights] includes bubbles, not dissimilar to the feel of being under water,” says George.

This fit-out, although driven by a budget, punches well above its weight.

The ‘chiselled’ walls, for example (that extend across the ceiling), are beautifully reflected in the mirror-sided display cabinets, creating unusual vistas and elements of surprise as one wanders around this unique gallery.

It’s certainly not a cave, but there’s a continual loop of urchin-like images projected on the screen embedded in one wall.

“When you’re working in tight spaces, it’s about creating both hard and softer moments, with light creating a different interpretation of the space,” says George, who was keen to create a sense of intimacy as well as the unexpected.

The new Sarah & Sebastian store in Armadale also clearly exemplifies when a large dose of imagination reigns over a more formulaic approach where wall-to-wall marble is considered an appropriate solution for items such as fine jewellery.

“It should always be about showcasing the work, as well as not overdoing the ‘wow’ factor,” adds Russell modestly.

Previous Good Weekend Superquiz and Saturday Target Time, February 27
Next What a warming Australia can learn from a frozen Texas

For Twitch founder, it was game on when Amazon’s Bezos came knocking