The incident, which occurred about 9.40pm on Wednesday, local time, in the 1500 block of Sierra Bonita Avenue in Hollywood, caught the attention of the world, particularly after Gaga’s camp offered a $US500,000 ($645,000) reward for the return of the dogs – “no questions asked” – even as Fischer was still being treated at Cedars-Sinai Medical Centre.

Thefts of purebred animals, which can fetch high prices even when they aren’t attached to pop royalty, are not unheard of. And the LAPD in recent weeks has expressed concern about criminals in the city becoming more brazen about street robberies – which have been ticking up with the easing of pandemic-related lockdowns, including in the same general area as the dog heist.

Earlier this month, LAPD Chief Michel Moore highlighted a string of Wilshire street robberies where individuals were robbing people of Rolex watches. In a January 30 incident also caught on camera, two attackers also jumped out of a white sedan near Melrose Avenue and North Vista Street – less than two kilometres south in a straight line from where the dog heist occurred – and tackled a man before stealing his watch.

“That’s an image I haven’t seen in 20 years,” Moore said in lamenting the robbery to local media.

LAPD Captain Jonathan Tippet, who heads the Robbery-Homicide Division investigating the dog heist, said that police did not have any suspects as of Thursday afternoon.

He said they were looking into whether the assailants knew the dogs belonged to the singer when they targeted them, but did not have any specific evidence to prove that was the case. Tippet said police were in contact with representatives for Lady Gaga, who were co-operating with the investigation. 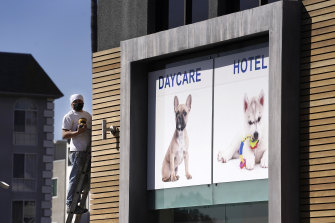 A picture of a French bulldog is featured above the entrance of Dog-E-Den Hollywood, near where Lady Gaga’s dog walker was shot.Credit:AP

An LAPD summary of the attack, described by a source who requested anonymity, indicated that the animals were the target of the robbers, one of whom said “give it up” as he pointed a handgun at Fischer.

Gaga’s dogs Gustavo and Koji were taken. A third dog escaped capture, ran to Fischer as the car drove off, and is now back with caretakers for Gaga, who TMZ reported is in Rome filming a movie and who recently performed on the national stage during President Joe Biden’s inauguration.

Police sources said the pedigree and associated value of the animals could have been the basis for the robbery, but the level of violence used adds to their speculation that the attackers knew there could be a star-powered windfall associated with their return.

Tippet declined to comment on the reward being offered by the singer’s camp. But such offerings can be a blessing and a curse for investigators.

Rewards are sometimes offered by law enforcement and affiliated groups like Metro Crime Stoppers in serious crimes such as shootings, but usually in an effort to identify the attackers and bring them to justice – not for the return of stolen property.

They can result in an uptick in tips and other useful information for police, but can also bring about a deluge of false leads and misinformation. The scope of misinformation can depend on the notoriety of the case in question. In this instance, it could be huge.

The neighbour who heard the attack occur and later watched video of it said it all “felt super targeted” to him. Regardless, it was extremely sad, he said, noting how hard Fischer had fought to keep the dogs safe. “He was really protective.”

Los Angeles has seen gun crime rise to alarming levels since the start of the pandemic, with more shootings and homicides occurring in the city than at any other time in the past decade. Through February 13, shootings were up nearly 145 per cent compared to last year, and more than 163 per cent compared to 2019.