admin February 26, 2021 Latest News Comments Off on The heroic librarians who stood against Nazi rules during World War II 14 Views

My favourite is Dorothy Reeder. She began her career at Washington’s Library of Congress and came to Paris alone in 1929. At the ALP, she started in the periodicals section and worked her way up to the role of directress. In the northern summer of 1939, when the US embassy advised Americans to leave Paris, she remained at her post. Three days after war was declared, she began the Soldiers Service in order to deliver books to French and English soldiers. She wanted the men to know they had friends at the Library. “No other thing possesses that mystical faculty to make people see with other people’s eyes,” she explained. “The Library is a bridge of books between cultures.” 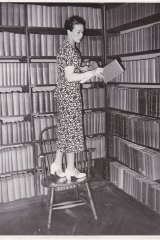 Cataloguer Evangeline Turnbull and her daughter Olivia both worked at the Library. When war broke out, the Turnbulls remained in Paris and wrapped care packages for soldiers. From September 1939 to June 1940, when the Nazis arrived in Paris, the Soldiers Service donated 100,000 books.

As the Nazis approached, Reeder urged the Turnbulls to return home. Canadian and thus British subjects, they risked being imprisoned as enemy aliens. Back in Canada, Evangeline wrote: “My life has been bound up with our Library for the 10 years I have been in Paris … through many lean days and times more hopeful and cheering that I cannot give up hope of returning to my work there some day.”

The Library trustees returned to the US, leaving only one, Ohio’s Countess Clara de Chambrun who was married to a French count. In 1920, she’d been one of the original Library trustees, along with the writer Edith Wharton. The countess received her doctorate from the Sorbonne when she was 48. She translated Shakespeare into French. She was also a novelist. In fact, she and Hemingway shared the same publisher.

In the northern spring of 1940, Dorothy Reeder devised an evacuation plan. When German soldiers drew closer, she sent her staff to a city west of Paris for their safety. Reeder remained at the library.

In a report marked “Confidential”, she described the first days of the occupation. “Was it really Paris whose streets I walked through the 11th, 12th and 13th of June 1940? I do not think so. It was a dead city. Everything was closed, locked and deserted. Even the fall of a pin could be heard.” This 15-page document, which underlines the dangers of daily life under the German boot, convinced me to write The Paris Library.

“I am ready and willing to carry books to those subscribers who are cut off from them.”

Unfortunately, the Germans’ reach soon extended to the west, so the Library staff returned to Paris. They learnt that Nazis had pillaged the Polish Library, which sits in the shadow of Notre Dame, and sent its archives to Germany. Reeder worried that the Nazis would soon arrive at the American Library in Paris. And when Hermann Fuchs, the Nazi “Library Protector”, did inspect the Library, he informed her that “Certain people may not enter” – meaning Jews.

Reeder conferred with the countess. They decided that if readers could not visit the library, the librarians would visit them. “I possess a pair of feet,” Clara de Chambrun said, “so do Boris and Peter. I am ready and willing to carry books to those subscribers who are cut off from them by any such ruling, and feel sure that every member of the staff would feel the same.” 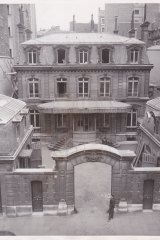 The ALP as it looked in 1936.Credit:Courtesy of Janet Skeslien Charles

The Boris she referred to was the head librarian. Like Dorothy Reeder Boris Netchaeff worked his way up the ladder at the Library. As a young man, he fought in the Russian Revolution.

Afterwards, he and his brother came to Paris, hoping to find peace but instead found themselves in the middle of another war. His brother joined the French Foreign Legion and was killed just days before the end of the war. Boris was shot by the Gestapo. I interviewed his daughter, who told me that he recovered and lived a long life, manning the circulation desk until he retired and continuing to smoke his beloved Gitanes cigarettes.

Though the librarians lived through dark days, there were rays of light, including a love story. Reference librarian Helen Fickweiler, a New Englander who arrived in Paris three weeks before war broke out, fell in love with a shelver named Peter Oustinoff.

The couple worked at the Library until Reeder insisted they return to the safety of the US. Helen had lost weight because there was very little to eat. Once home, she was interviewed for the Evening Bulletin below a headline that read: “Back from Paris, She Hopes Never to See Turnips Again.” She and Peter married. I had the pleasure of corresponding with their daughter, Elizabeth Oustinoff, who helped identify people in archive photos.

Paris often gets trapped in the past. Perhaps that’s part of the allure of the City of Light: the unchanging architecture makes it feel like a museum. But now, as Parisians face another lockdown, it’s important to know that librarians today are doing all they can to ensure books are accessible.

The Paris Library (Hachette) by Janet Skeslien Charles is on sale now.

This article appears in Sunday Life magazine within the Sun-Herald and the Sunday Age on sale February 28. To read more from Sunday Life, visit The Sydney Morning Herald and The Age.

Get a little more outta life

Start your week with practical tips and expert advice to help you make the most of your personal health, relationships, fitness and nutrition. Sign up to our Live Well newsletter sent every Monday.