Washington: Saudi Arabia’s Crown Prince likely approved an operation to kill or capture a US-based journalist inside the Saudi consulate in Istanbul, according to a newly declassified US intelligence report that could escalate pressure on the Biden administration to hold the kingdom accountable for a murder that drew bipartisan and international outrage.

The central conclusion of the report, released on Saturday AEDT, was widely expected given that intelligence officials were said to have reached it soon after the brutal October 2, 2018, murder of Jamal Khashoggi, a critic of Crown Prince Mohammed bin Salman’s authoritarian consolidation of power. 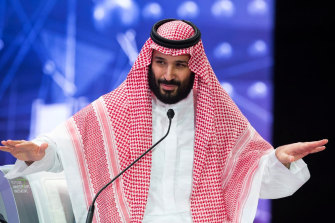 The US implicated Crown Prince Mohammed bin Salman, pictured, in the killing of journalist Jamal Khashoggi.Credit:AP

Still, since the finding had not been officially released until now, the public assignment of responsibility amounted to an extraordinary rebuke of the ambitious 35-year-old Crown Prince and was likely to set the tone for the new administration’s relationship with a country President Joe Biden has criticised but which the White House also regards in some contexts as a strategic partner.

The report was released one day after a later-than-usual courtesy call from Biden to Saudi King Salman, though a White House summary of the conversation made no mention of the killing and said instead that the men had discussed the countries’ longstanding partnership.

Previous From academia to animal shelter: Keeping poverty from the door during COVID
Next Mask easing marks start of path to a normal life, experts say