What a warming Australia can learn from a frozen Texas

admin February 26, 2021 Environment Comments Off on What a warming Australia can learn from a frozen Texas 15 Views

Scientists have little doubt about what led to the deep freeze. Global warming has caused Arctic sea-ice to recede by about half-a-million square kilometres. This in turn has weakened the jet-stream, a normally stable band of low pressure and cold air surrounding the Arctic. Freed by the unstable jet stream, Arctic temperatures spilled south.

In Texas from the week of February 15 temperatures reached new lows, at one stage dropping to -13 degrees Celcius, shattering the 1909 record of -7.

Unprepared for the intense cold, the state’s electricity grid began to fail, prompting a response was informed as much by ideology as by fact in some quarters.

On day two the Fox News star host Tucker Carlson told his viewers that “a reckless reliance on windmills is the cause of this disaster,” and claimed that “the windmills froze, so the power grid failed”.

On the third day of blackouts former Texas governor Rick Perry said Texans would happily endure more “to keep the federal government out of their business” while current governor Greg Abbott appeared on another Fox News program to blame renewable energy.

“Our wind and our solar got shut down, and they were collectively more than 10 per cent of our power grid, and that thrust Texas into a situation where it was lacking power on a statewide basis,” he told host Sean Hannity. “It just shows that fossil fuel is necessary.”

He blamed the Green New Deal, a set of environmental policies championed by left-wing Democrats and partially embraced – though mostly not yet implemented – by the Biden administration.

Tim Boyd, mayor of Colorado City – which is in fact a small Texas town – told his citizens that “only the strong will survive and the weak will [perish]” in a blog post.

“No one owes you [or] your family anything; nor is it the local government’s responsibility to support you during trying times like this!” he said. “Sink or swim it’s your choice! The City and County, along with power providers or any other service owes you NOTHING! I’m sick and tired of people looking for a damn handout.”

Whatever you make of Boyd’s view of government responsibility, it soon became clear that renewable energy did not cause the grid to fail.

In fact no single technology failed. Some windmills froze, but windmills provide only slightly more than 10 per cent of Texas’ power. Gas lines froze too and one unit of a nuclear power plant failed.

“All sources underperformed expectations,” Daniel Cohan, an associate professor of civil and environmental engineering at Rice University in Houston told the New York Times days later. “But far, far more than everything else combined were the shortfalls from natural gas.”

What is already clear is that Texas’ grid was unable to cope with the sort of extreme weather already becoming more common due to climate change. Further, that it was rendered more vulnerable to the storm because it has been “islanded” from the grids that serve groups of nearby states.

This was the result of politics rather than engineering or climate change. The Lone Star state has always liked to go it alone, as Boyd’s comments above suggest.

These various forces did not go unnoticed by Tony Wood, director of the energy program at the Grattan Institute.

Like Texas, Australia is vulnerable to a changing climate, though our grid is battered by heatwave and fire rather than Polar Vortex.

And as in America commentary about how to harden the grid is often coloured by ideology over engineering, he says.

Wood says when South Australia suffered a catastrophic loss of power in 2016, some antagonists and champions of renewable and fossil fuels selectively harvested facts to bolster their causes.

In fact weather and technological factors combined to cause blackouts that the state was vulnerable to because back then its grid – like Texas’ – did not have strong links to outside energy sources.

A spokesperson for Energy and Emissions Reduction Minister Angus Taylor says the events in Texas showed why the government needs to “balance Australia’s record level of investment in intermittent renewables with new dispatchable generation like gas, pumped hydro, and, as we look to the future, hydrogen”.

“Dispatchable generation is what is needed to back up our system, put downward pressure on prices when demand is at its peak,” the spokesperson says.

Australia’s electricity network is often threatened when bushfires rage around transmission lines. The Black Summer bushfires last summer damaged power lines and forced outages for tens of thousands of households in the nation’s south-east and a desperate backburning and tree clearing operation narrowly avoided damage to the main interconnector linking the grid in Victoria and NSW.

The Morrison government is investing $6 million in the CSIRO and Bureau of Meteorology to assess likely future climate change scenarios and identify long-term climate risks to the energy sector. Governments are also required to regularly update their emergency energy supply arrangements in case of extreme weather events.

Taylor is working with state governments to build high voltage transmission lines, which will link new renewable zones and hydroelectric dams which are being built across the country.

More than 60 per cent of Australia’s ageing and increasingly expensive coal-fired capacity is set to be shut down over the next 20 years and likely replaced by cheaper renewable energy.

NSW and Victoria have committed to deliver net-zero greenhouse gas emissions by 2050 and are rolling out clean energy plans to guarfantee renewable energy investors a minimum price for the energy they generate, based around a total of 14 renewable energy zones in regional areas supported by transmission links. 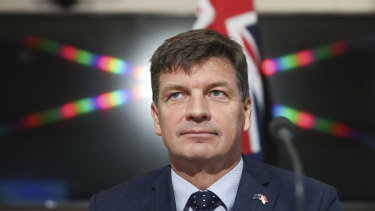 Energy Minister Angus Taylor is working with state governments to build high voltage transmission lines, which will link new renewable zones and hydroelectric dams which are being built across the country.Credit:Alex Ellinghausen

Their plans have been welcomed by clean energy supporters but have caused concern among the largest energy companies and Taylor who, while still engaging on network infrastructure, has expressed concern that state policies risk fragmenting the national grid and deterring investment in new supply.

The federal government is largely leaving it to the market to determine where and when new large-scale electricity generation is developed. However, this week its independent adviser Infrastructure Australia called for a massive expansion of renewable energy zones across Victoria, NSW and Queensland, which it says should be supported with increased investment in dispatchable energy that includes batteries and large-scale pumped hydro.

Taylor has several initiatives at different stages of development. He wants to establish a $1 billion Grid Reliability Fund, to be operated by the Commonwealth’s green bank the Clean Energy Finance Corporation, which could be used to support gas power and infrastructure projects deemed critical to the energy grid as well as batteries and pumped hydro.

A bill to establish the fund was derailed last week by former Nationals Leader Barnaby Joyce who lodged an amendment in Parliament to open the fund to coal projects, which caused Taylor to delay the bill.

Taylor has also pledged to commission Commonwealth-owned Snowy Hydro to build a gas peaking plant to supply up to 1000 megawatts of dispatchable power into the grid.

He said he did not trust private industry to replace the baseload power which will be lost due to the scheduled closure in 2023 of the 1000 megawatt Liddell coal-fired power plant.

An interstate initiative is creating opportunities for governments to improve their co-operation. The Energy Security Board, established by the Commonwealth of Australian Governments Energy Council in 2017, is providing policy advice to governments on the unprecedented market transition, proposing a raft of regulations for the future power grid to stop electricity price blowouts and power supply failures.

It remains to be seen how governments respond.

Previous Have we lost the ability to speak up and disagree with the boss?
Next ‘Plausible deniability’ threatens our democracy