Breaking News
Home / AFL / ‘You feel like this monster of a person’: unguarded moments caught by Amazon’s fly on the wall

‘You feel like this monster of a person’: unguarded moments caught by Amazon’s fly on the wall

admin March 9, 2021 AFL Comments Off on ‘You feel like this monster of a person’: unguarded moments caught by Amazon’s fly on the wall 13 Views 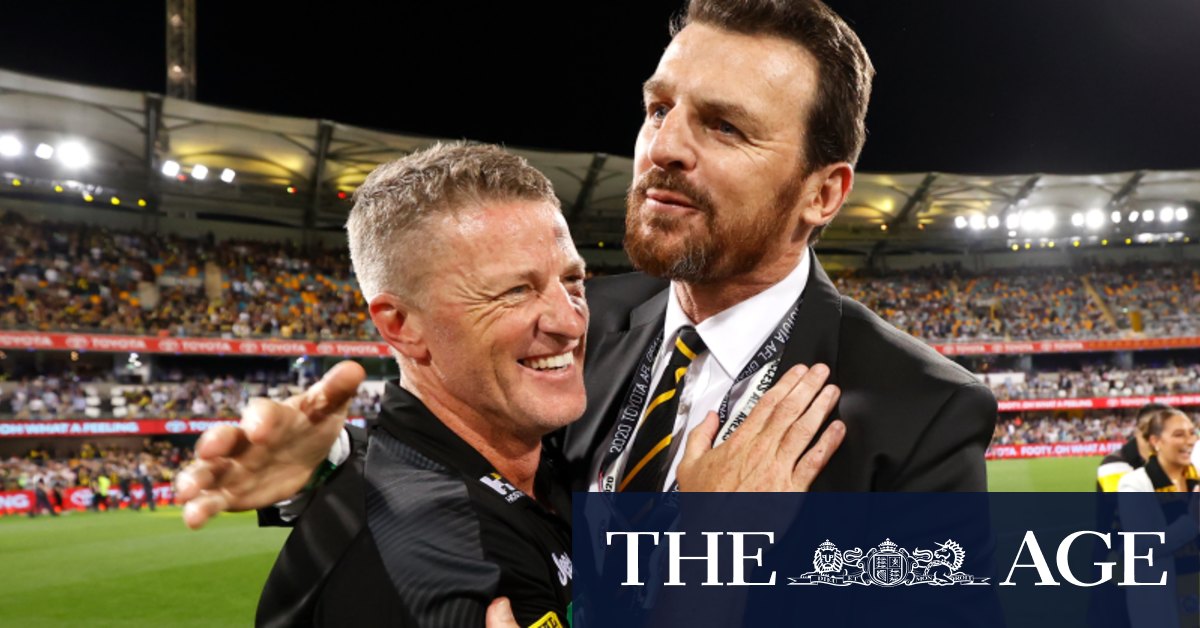 Executive producer Gil Marsden said this was the key to the appeal of Making Their Mark, The Test and other docos of its type in the US. People were over the “hyper polishing” of sports people by image-makers, he said. They wanted to see the humanity.

The clubs bought in on this basis, but heart in mouth.

“For years, the feedback from our fans was that we’ve been a closed shop,” said Adelaide captain Rory Sloane. It was all or nothing. “We didn’t have a choice,” said Richmond CEO Brendon Gale.

The Amazon fly pesters the reigning premier, as well it might, and Gale said not a drop of Mortein was allowed.

It cocks an ear to Richmond zoom board meetings after two incidents of erratic player behaviour, captures the tension at all levels of the club and fears about the fatal disruption that might ensue, but also the way the Tigers gathered themselves up again. Gale is annoyed by an emerging portrait of the club as arrogant and hubristic. “It’s not real,” he tells the board. “It’s rubbish.”

Hardwick’s agitation is plain, but he stills himself to address the team. “You feel like you’re this monster of a person in a monster of an organisation,” he says. “We’re not.” He points to a screen with an image of the Tigers with the premiership cup, and under it the legend: “Hungry and Humble”. “This is who we are,” he says.

Coaches, naturally, draw the fly’s ear and eye. “Tell ’em to take ground,” Cameron calls down the phone as the Giants struggle against Adelaide one rainy night. “We can’t play perfect footy here.”

In a West Coast leadership group meeting, the names of 11 unavailable players are read out. “Where’s Gov (Jeremy McGovern}?” asks coach Adam Simpson, looking around. “He’s getting a scan,” comes the reply.

Simpson makes a strength of a weakness. Courage, belief and love would get them through, he tells the team, but also an element of “f— you”. When they come back to beat St Kilda and seal a finals berth, he turns to colleagues in the box and says: “Bit of ‘f— you’ about that, boys.”

It’s earthy. Of course it is. Even when on a winning run, a football club is forever on edge about the next match and the stress is always apparent. “F—ing dumb,” exclaims Hardwick early in a match the Tigers eventually win. “We’re playing a shit brand of footy.” And that’s the repeat premiers.

Up close in three-quarter-time huddles when matches are on the line, what strikes is the suburban plain-ness; there are no Vince Lombardis here. Of course, that glosses over the sophistication of week’s planning and the sheer talent of the players. But as Coniglio notes: “At times, we do over-complicate AFL.”

Dew says Australian sport is “underrated” and hopes Making The Mark will act as a showcase. Amazon hopes for this, too; it will be available in 250 countries. But you imagine it will also re-endear AFL fans to their game. They might still come with baseball bats from time to time, but not fly swats.

Previous ‘Culture of hyper-masculinity’: Boys’ schools grapple with gender
Next Daniel Andrews to be transferred to Alfred trauma centre after ‘nasty fall’