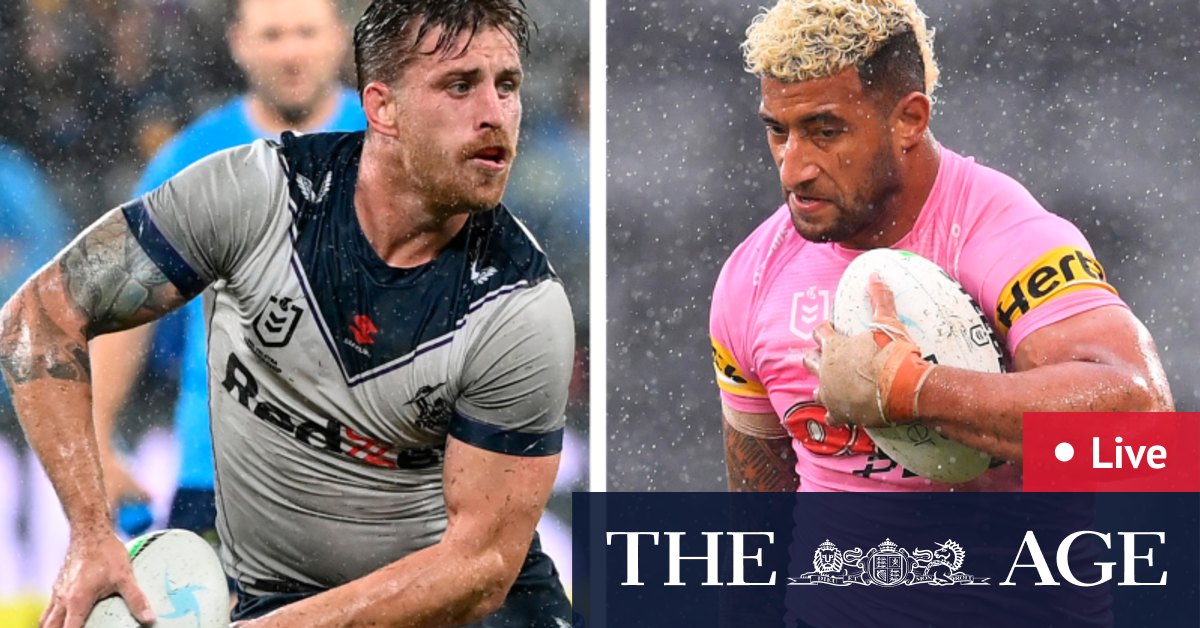 That was amazing and there is a LOT to discuss after that. The Storm go over on the stroke of fulltime through Olam but Kikau somehow climbs off the turf on one side of the field to get his giant hand under the ball on the other. And the replay is going to be ugly for Olam because Addo-Carr was ready to score, unmarked on his outside, and he just had the blinkers on and wanted to do it himself.

The other big talking point is going to be from the short restart, Melbourne were convinced they had earned a penalty with the Panthers player offside but the review was denied. They didn’t really give that a long look and there seemed to be a hand there from Crichton.

Anyway, controversy galore, drama galore, injuries (Dylan Edwards the main one with his broken hand) ahoy, what a way to start the round. Thanks for tuning in, make sure to read the SMH tomorrow for what I can only imagine will be some spicy follows from the press conferences and dressing rooms.

This is amazing stuff. Olam put the head down and burrowed over but the referee says he has either lost it or not grounded it. Has Kikau got the hand under it? He has SAVED THE DAY for the Panthers! What a match! The Panthers are going to hold on in the grand final rematch!

Cool and calm, Crichton smashes it through on his preferred side. Was about halfway between the sticks and the sideline and belts that over the crossbar. But now the Panthers have coughed it up from the short kick and is this a penalty? Is Crichton offside? A captain’s challenge is unsuccesful and that is CONTROVERSIAL. Bellamy is losing it!

Still, the Storm get one last chance!

Kurt Capewell take a bow! It’s 10-10 and Crichton will have a conversion to win it! What a play from the backrower, sensational feet for a big man, goes one way, the other and over he goes. It’s alllll square, kick to come.

Just three minutes left and they trail by four. Brandon Smith took a heavy knock before as he ran it out of his red zone but has now rejoined the Storm line. To’o with the speculating kick and he somehow regathers! Just metres out now!

Bundles him into touch there to keep his side in the contest. It’s 10-6 to the Storm with five minutes left to play but the Panthers are at the wrong end of the field at the moment.

But he was brave at the contest as he went down to field that Hughes kick. Had to put his body right on the line there but still comes up with the mistake. Smart kick from Hughes, was a shorter one and that put the fill-in fullback in a race to get to the football. This looks like a big set now for Melbourne.

So the score remains 10-6 to the Storm with 13 minutes to go, so ample time on the clock for the Panthers.

The Fox is over. Addo-Carr only needs an inch and he takes a mile. Munster pulling all the right strings there and Addo-Carr is over in the corner. A crucial passage of play there with the knock on and the try a minute later.

The anxiety is building for both teams, some niggle out there as well. It’s only round three but neither of these sides wants to be losing tonight. Tyrone May has been pretty handy at fullback since he came on for Edwards (broken hand) at halftime. And that’s a terrific set from the Panthers, they earn another set and they are the ones with some wind in their sails just at the moment. Still 6-6, it’s been a quality night of NRL.