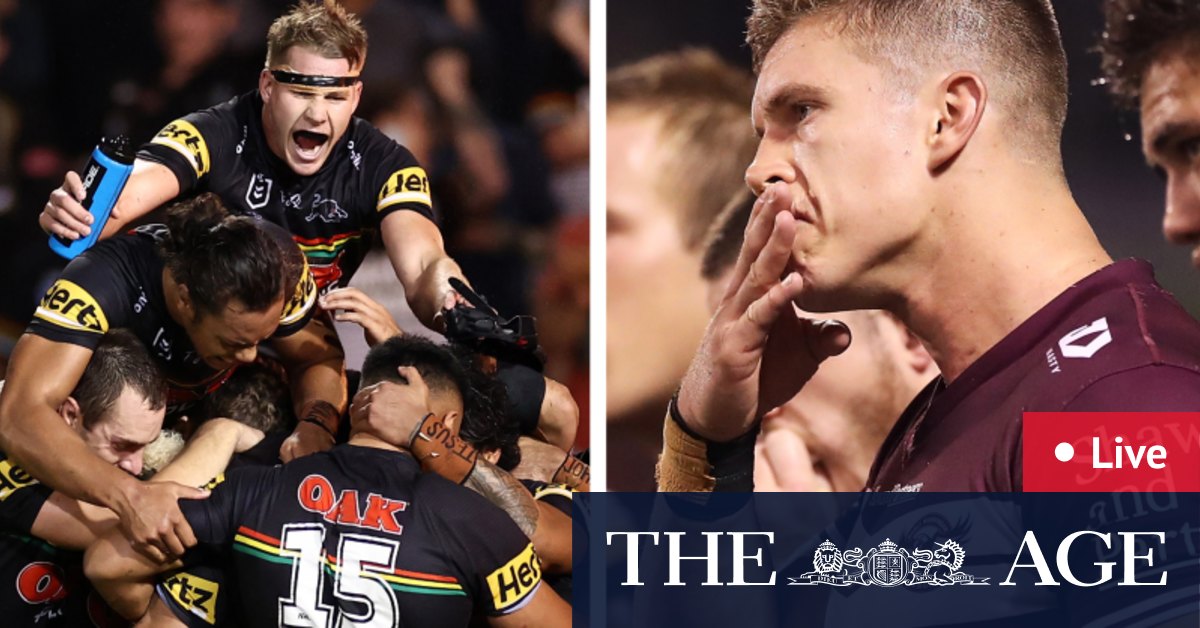 What can you say? That all went according to most predictions. Penrith in another league, Manly right at home down there among the wooden spoon canidates and that looks a three-horse race with Brisbane and the Bulldogs. Moses Suli and Morgan Boyle the injuries for Manly, Boyle looks like he could be missing for a while with a dislocated shoulder that saw him go off on a stretcher.

Penrith are purring along nicely, Nathan Cleary with a brilliant return, great contributions all around the park. Manly are, er, I thought DCE tried hard. Manly have the Warriors and Titans in store but might get a chance to win one when they meet the Tigers in round seven.

Cheers for tuning in folks, happy campers if you are a Panthers fan and if you are a Manly fan, at least the bandaid has been ripped off ahead of the weekend.

Cleary involved again, Charlie Staines in space, finds Paul Momirovksi inside and he stretches out to score. Too easy. A poor contest to start the round tonight, easy money if you are a Panthers fan. Cleary nails it and it’s 44-6 with a minute remaining.

Alas, this blowout is hardly a surprise and I guarantee you there will be bigger scores this round with the Storm playing Brisbane and Souths meeting the Bulldogs. Even so, Manly have barely been in the contest and have lost Morgan Boyle (shoulder) and Moses Suli (back) to boot. Penrith look like they have another one in them as well as the clock counts down towards fulltime.

He’s been terrific in this half, the Panthers half. Cuts through the line, runs outwards, kicks for himself, regathers, grubbers it back inside on the sharp angle and Kurt Capewell manages to get a fingernail on it. Cleary adds the extras, it’s now 38-6, this is turning into a hiding after all.

Lower back it is, a contact injury from a knee and he won’t return. So they are down to a two-man bench when they actually need a 22-man bench to be competitive against the grand finalists. Here’s that latest try from Burton, who looks a great buy for the Bulldogs and the kind of playmaker you can build a team around.

It wasn’t pretty but the pressure just told on Manly. They throw it behind Kikau and Matt Burton cleans up the scrappy pass off the deck and he scores his first for the year. A thunderous charge from James Fisher-Harris set that up and attracted four or five defenders tight through the middle. The kick is clean and it’s now 32-6 to the Panthers.

Manly have scoreboard and injury concerns but aren’t conceded at a rapid rate just yet. Penrith probing away but their attack hasn’t been super crisp tonight, even if they are well up on the scoreboard at 26-6. Cleary starting to take the line on though and that’s always good news for the Panthers.

He went straight down the tunnel there, clutching a hip or side or lower back, somewhere in that region. Looked in pain as well. A tough night for Manly getting even tougher as their ranks thin by the minute.

That’s bad news for Manly, Boyle in obvious discomfort so not surprise to hear that confirmed. Meanwhile, DCE has a crack there and is stopped short by Kikau, who appears to have cloned himself in recent weeks.

So much for the HIA. Poor old Manly. Morgan Boyle was down in agony in back play, some suggestion he’s dislocated his shoulder, and play just goes on for another few plays and Kikau barges over. What a strike weapon he is for the Panthers, those edges like him and David Fifta are so valuable in the modern game.

Stretcher out for Boyle. It’s now 26-6 to Penrith.