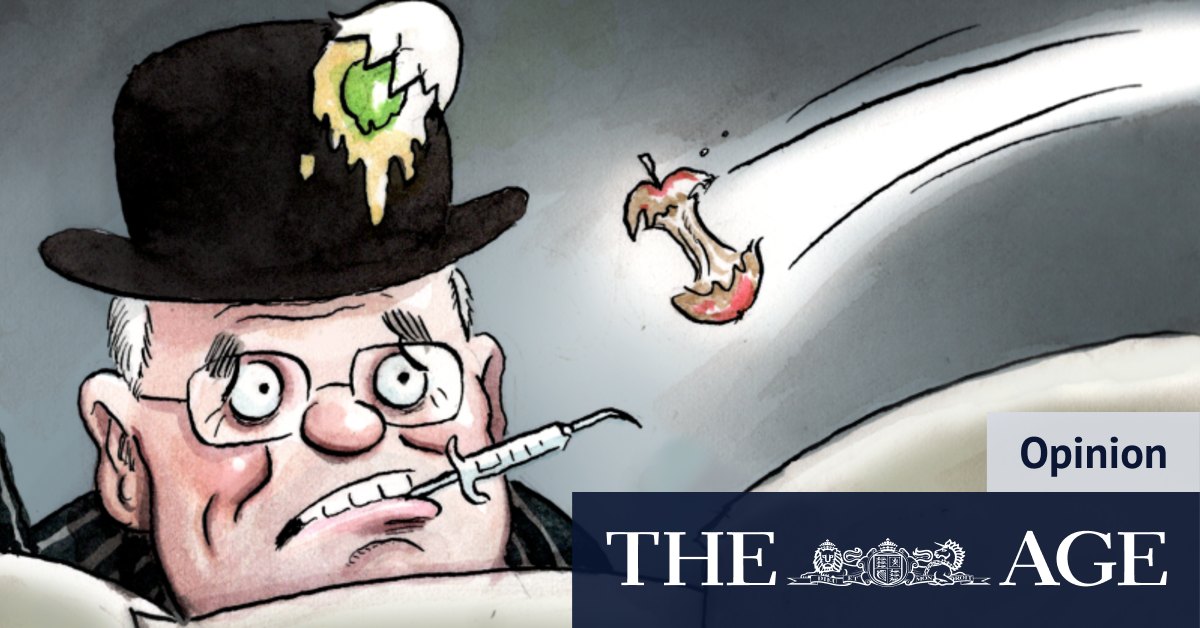 Similarly, by keeping Andrew Laming in his party room and on his backbench until the next election, Morrison has retained a man whose behaviour he described as “disgraceful”. Even a self-confessed serial harasser of female constituents is good enough to be a Coalition lawmaker according to Morrison’s rules.

As for the contrivance of “empathy training” for Laming, Shorten again caught the essence. He’s a “backbench troll sent off to study how to impersonate being a human being”.

Yet the Berejiklian Coalition government in NSW has put Morrison to shame. Deputy Premier and leader of the Nationals John Barilaro demanded that one of his MPs, Michael Johnsen, accused of rape as well as lesser misconduct, resign not only from the party but also the Parliament. Gladys Berejiklian supported the move and now faces a byelection in a marginal seat.

Berejiklian’s government is in a similarly parlous position as Morrison’s – its majority is at stake in this byelection. But where Morrison apparently will accept any standard from his government, Berejiklian has drawn the line. Morrison gives a new distastefulness to the word “pragmatism”.

It’s seven weeks since news of Brittany Higgins’ alleged rape in a minister’s office in Parliament House first struck. It was only the first of apparently endless shocking revelations, revelations that have agitated and angered millions of people and galvanised a new social reform movement, Justice 4 Women.

How could Morrison have learnt from his bushfire bungling and stepped up to the COVID-19 crisis so effectively, yet reverted to dodging responsibility on this one? The federal government didn’t have an option on COVID-19. It was not a crisis of choice. The federal Biosecurity Act is invoked by Australia’s Chief Medical Officer, who was Brendan Murphy. He didn’t ask any politician’s permission; it was his statutory obligation to act independently of executive government.
He decided to trigger the act and advised Health Minister Greg Hunt accordingly. Hunt advised Morrison. It was a reality under the law and the Prime Minister could not choose to ignore it.

But when the emerging crisis was justice for women, it was a matter for Morrison’s own political discretion. He reverted to form as the Prime Minister who said “I don’t hold a hose mate”. His approval rating has fallen as a result.

It’s not only women’s rights that are posing a problem for Morrison. Even his strong performance on COVID-19 is starting to unravel as the vaccine rollout encounters delays. Now that Canberra this week tried to blame the states, the premiers have reacted furiously. Berejiklian, for instance, has accused the Morrison government of lying about vaccine supplies.

And as spot COVID outbreaks continue to emerge, this time in Brisbane and NSW’s Byron Bay, a new wave of regionalised lockdowns has begun. If this continues, the economic recovery could well stumble. With JobKeeper gone, unemployment could start to rise again. Morrison’s greatest achievement could start to tarnish.

Winston Churchill is remembered as the archetypal great leader. His name today conjures “an idealised form of political steadfastness” in the words of British historian Richard Toye. His determination to stand against fascism even in the darkest days of World War Two has won him an undying place in history’s pantheon of heroism.

After winning the war, Churchill was unsentimentally discarded by the British electorate. He won the war but not the peace. A number of commentators including Niki Savva have expressed a premonition that Morrison could fall prey to Churchill syndrome, that he could win the pandemic but lose the peace.

Australia has its own modern precedent, a prime minister who saved the country from an international crisis yet was cast aside by the people. It was, of course, Kevin Rudd, whose government faced the global financial crisis.

“The circumstances are somewhat different today, not least because our government was not at all a rolling circus of sleaze”, Rudd tells me. “But on the broader question of leading a recovery from an externally generated crisis, the truth is the public can have relatively short memories.” Rudd says Morrison’s problem could be bigger than his because he is running a national debt more than twice the size of Rudd’s as a percentage of GDP.

“Without an infrastructure build of any note to show for it, while in the process buggering up the vaccine rollout, and that’s before you add the overlay of legitimately angry women.

But what ended Rudd’s first prime ministership was not the voters but his colleagues. The former Labor PM expects Morrison will have a similar problem: “Morrison’s challenge, like mine, will also be internal to the factions of the party. Namely, when ambitious colleagues spot a crack of opportunity emerging following a crisis. Then political caution is often thrown to the wind as people stampede towards opportunity. Suddenly what the Australian public sees is the emperor has no clothes.”

Morrison has a bit more than a year till he’s obliged to go to the people, and that’s an infinity, with an infinity of opportunities for recovery. But the precedent of Churchill, and the ghost of Rudd, will haunt him every day.