Tough ask: the women given the job of saving the Morrison government

admin 3 weeks ago Federal Politics Comments Off on Tough ask: the women given the job of saving the Morrison government 16 Views 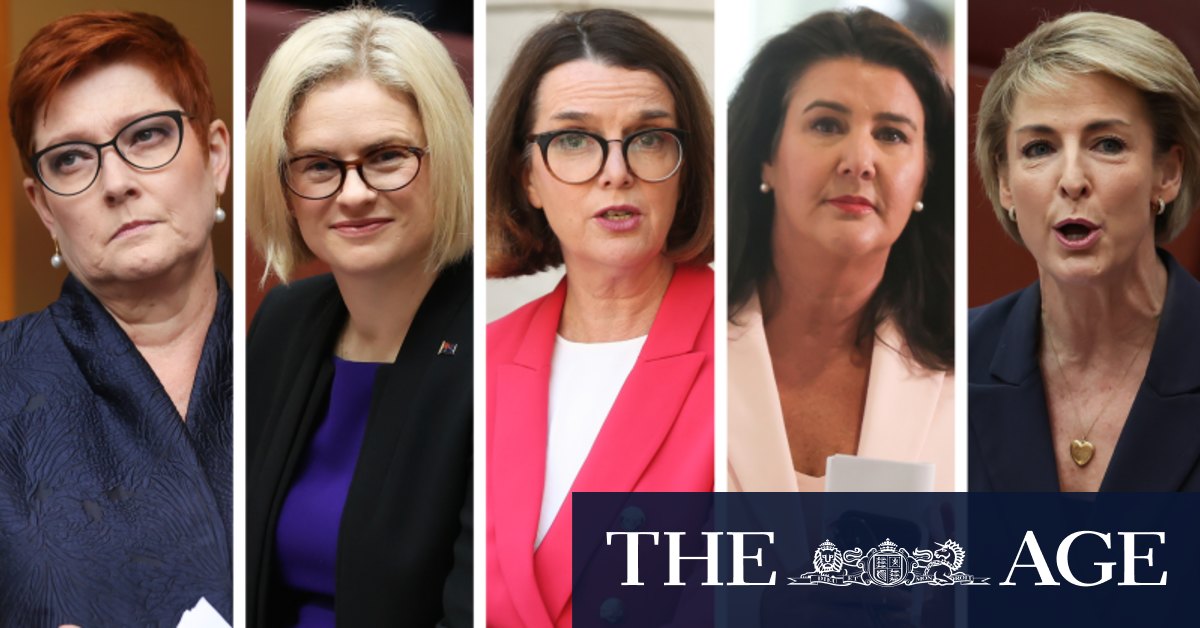 Morrison envisages its role will be to assess policies for their impact on women as they’re being developed and bring forward new policies and champion them across other portfolios, such as for childcare.

It’s anticipated Payne and the taskforce will take a little time to settle on the most effective ways to work but hopes are high it can actually drive action and not descend into yet another talkfest.

Government MPs acknowledge real change is needed. They say the anger of the women who marched on Canberra, spurred on by Higgins’ call for justice, has seeped into suburbia and the consciousness of Morrison’s “quiet Australians”.

Newspoll showed the government’s primary vote fell in early March, with the Coalition dipping behind Labor on the two-party preferred measure. The polling published this week had Morrison’s personal net-approval rating down by half to 15 per cent over the past fortnight. At the same time, Essential Research found his personal standing plummeted with female voters, with just under half the women surveyed approving of his performance and two in five disapproving. Both measures shifted by 10 points in a fortnight.

The women who have to save Morrison and his government have come under fire themselves for their mixed history in advocating for women’s rights.

Sexual assault survivor, activist and Australian of the Year Grace Tame warned people hopeful of change “not to be naively misled by superficial distractions posed as solutions”.

She took particular issue with the promotion of Stoker, accusing the senator of endorsing columnist Bettina Arndt’s “‘fake rape crisis’ tour aimed at falsifying instances of sexual abuse on school and university campuses across Australia” and failing to support victims of sexual assault.

“Either the Prime Minister is ignorant of the cultural issues at hand, or he understands them completely, and is making calculated moves to perpetuate them,” Tame wrote on Instagram.

Stoker responded that Tame must be unaware of her career as a barrister and prosecutor working for justice for women and children, and her arguing “out of the media spotlight” for more resources and better systems to deal with sexual assault and harassment. Morrison said he didn’t share Tame’s views.

Others have highlighted Stoker’s strong anti-abortion stance and comments she made last year that women shouldn’t need to frame the challenges they face in politics through the lens of gender.

South Australian MP Nicolle Flint, who is retiring at the next federal election because of sustained sexist attacks and harassment, defended her friend this week, saying Stoker had been one of the few to always support her.

“Only when we all work together will we achieve desperately needed change for all women,” Flint said.

Hume was promoting a policy that domestic violence victims should be able to draw on their superannuation to flee abusive relationships, until Payne dumped it in the same estimates hearing where she said she didn’t have an impossible job. Cash has also drawn accusations of sexism in the past after she threatened to “name every young woman in [Bill] Shorten’s office about which rumours in this place abound” in Parliament. She later withdrew the remarks.

Macquarie University associate professor Michelle Arrow, who specialises in feminist history, would have preferred to see a standalone Minister for Women who had that as their sole portfolio.

“Putting a bunch of women who have not shown very much sympathy for women’s plight or … the kind of record that they have in those portfolios around supporting women who are the most vulnerable, it’s not particularly great,” she says.

“It reinforces the idea that these are women’s problems that women have to solve as well. These are not minority issues, these affect more than 50 per cent of the population.”

Hayley Foster, chief executive of Women’s Safety NSW, the peak body for specialist domestic and family violence services in the state, says it was problematic that again responsibility for addressing “women’s issues” seemed to have been thrust upon only women. But conversely, she was hopeful they would be able to bring their own life experiences and understanding of the problems to the table.

“We can’t have people who don’t truly understand those issues heading up and leading in addressing those issues,” she says.

For Foster, the elevation of women’s issues to cabinet level is positive but what happens in May’s budget will be the true test.

“For far too long, the issues affecting Australians, female Australians have been sidelined and put in the subsidiary or the ancillary bucket – and often the bucket of ‘this is too hard and too expensive’ and we don’t want to deal with it,” she says.

“Once we see what is prioritised in the budget, and if we do start seeing a genuine commitment of action following up the words, then we will at that point be able to say that the government has heard us loud and clear and is starting to prioritise the issues that are facing Australian women.”

Foster has already met with Payne, Stoker and departmental representatives about ways to increase conviction rates for sexual assault and drive down the levels of harassment, and found them receptive.

The taskforce also has a couple of blueprints to guide its work.

Sex Discrimination Commissioner Kate Jenkins’ landmark report on workplace sexual harassment, Respect@Work, was given to the government more than a year ago.

The formal response to its 55 recommendations is imminent, Morrison has promised. It’s expected this response will be the key focus for the taskforce’s first meeting on Tuesday.

Just this week, a Coalition-dominated parliamentary committee handed down a 470-page report on its inquiry into family, domestic and sexual violence. It urges the government to act on 88 areas, including setting up an independent commissioner to oversee the next national action plan to reduce violence against women and children, universal age-appropriate education on respectful relationships and sexual consent, and tougher penalties for domestic violence.

Labor’s spokeswoman on the prevention of family violence, Jenny McAllister, says the Liberal backbenchers putting this report together had been more ambitious than Morrison, Ruston and Payne.

“The Coalition-controlled committee has issued a report that criticises the approach taken by the very ministers who now comprise the new women’s safety taskforce,” she says. “The challenge for the government is to explain how this taskforce will change anything.”

Ruston and her state and territory counterparts are now developing the next national action plan to reduce violence against women. This process is expected to include a national summit of women, peak bodies and domestic violence service organisations, similar to that called for by Liberal backbenchers Bridget Archer and Russell Broadbent.

Ministers responsible for workplace health and safety – including Cash as the new Attorney-General – are set to decide next month on new work, health and safety laws designed in part to prevent sexual harassment.

Much of this work plan was established well before Morrison’s reshuffle. The formation of the dedicated women’s taskforce adds another spotlight under which to scrutinise what is being done.

The coming months will reveal whether backing up the words and intentions with action and money is an impossible job for this government.

Previous Retail investment hits $5b as landlords remix malls
Next Why was a man of this age knocked back?