admin 2 weeks ago Sport Comments Off on As it happened: South Sydney Rabbitohs v Brisbane Broncos at Stadium Australia 10 Views 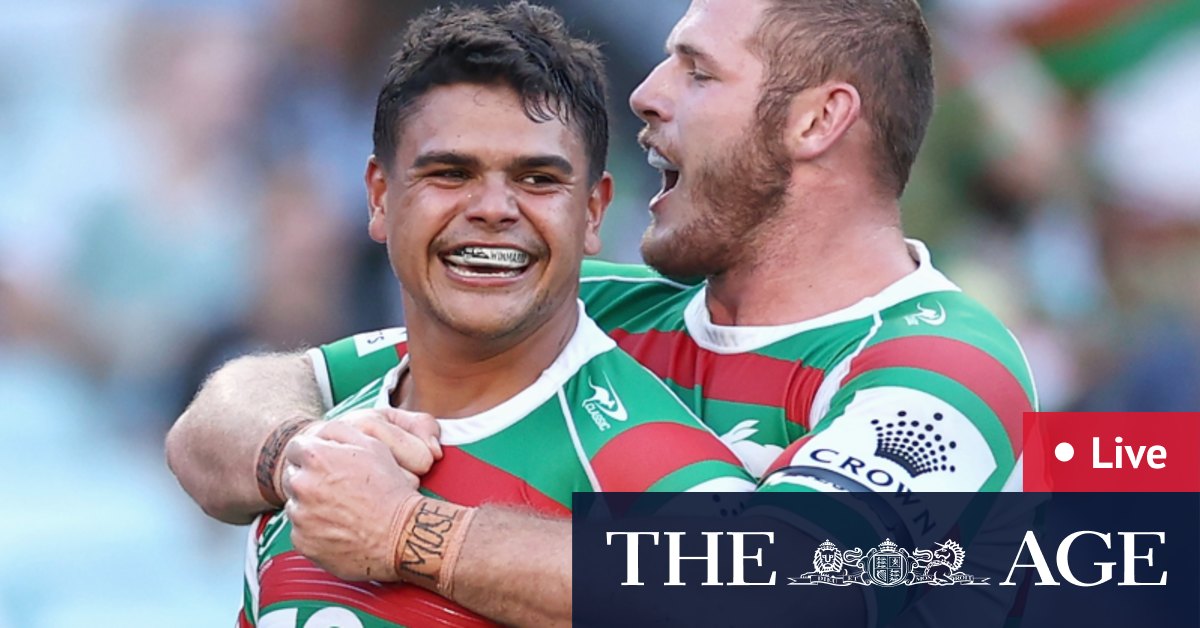 Mitchell pots a field goal just for something to do right on fulltime and Souths complete a simple win over a Broncos team that continues to struggle. It was a contest for a while in the first half but again, once a good team gets on a roll against a struggling team, it was game over. Souths win four in a row, Brisbane get to go back home next Thursday night to host, er, Penrith. Kevin Walters really has to pick a seven and stop carrying an extra one on the bench, Souths really have to sign Adam Reynolds for two years and just make the cap work around those numbers.

See you later, cheers for tuning in tonight.

Reynolds kicks high, Latrell outworks everyone and slams it down. It’s now 34-6 and just two minutes left in what has been yet another underwhelming contest.

The question is: Why? Absolutely agree with Jamie Soward here. It’s the sign of an immature coach I think and Kevin Walters must make a call on his seven one way or another. What’s the point of giving Croft 10 minutes of junk time?

Local Rabbitohs product, he’ll enjoy this one. Good time to get your first NRL start when your team is on the right end of a big scoreline.

Still 17 to play and we are getting into smash up territory. Graham isn’t a giant but he’s tall and strong and generally a big body to stop. Someone I saw just made a good point on twitter about Brisbane’s backline: Very little size. They just don’t have any big centres or wingers to really smash into the line. It’s a problem for them.

Bicep concern by the looks of that but he is trying to play through the pain. Souths pressing now as Josh Mansour bounces around defenders. Cook grubbers but Brisbane with the knock on. Was that a little harsh on Jake Turpin? Nope… little bobble at the second attempt and Campbell Graham makes them pay. Souths warming uo now as they score off the scrum.

Latrell Mitchell comes up with the big play, strides through the Dearden tackle, wasn’t complete, he goes again and slams it over. The Rabbitohs lead 24-6 and now Brisbane kick it out on the full after they concede. Kevin Walters is looking a little glum now after that error from Isaako.

Gets in a nasty spot there in the tackle of Dearden and John Asiata. Was not happy either but he earns his side a penalty and they are right on the attack. Souths have been fairly poor after that blistering start but have they scored here? Mitchell is claiming one.

That has ended up hitting him right on the snoz as he competed with Johnson. Had the jump on AJ there and had every right to grab that one and get over for the score. Almost too easy in the end and he makes the mistake. But now Campbell Graham makes the error coming out of yardage. Souths tried their hand with the early shift, David Mead races up and the pressure forces the error.

Souths attack early but the final pass is forward.

Previous AstraZeneca setback will have dramatic consequences on our daily lives
Next Double or nothing: Reynolds kicks first two-point field goal after week of distraction