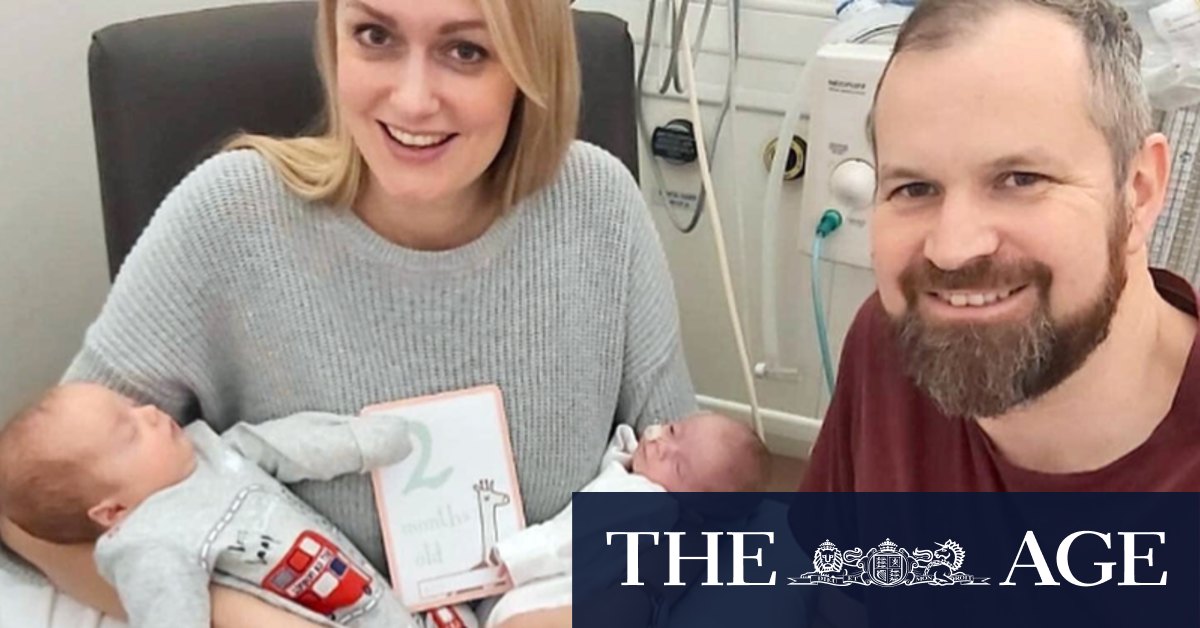 “It just doesn’t happen,” Walker said, adding that it took several scans before he could confidently diagnose the condition.

“We were concerned because the second twin was much smaller. It was only by regularly scanning and seeing that the rate of growth was consistently three weeks behind that we realised it was superfetation,” he explained.

The true number of superfetation cases is not known, but according to a report published in 2008 in the European Journal of Obstetrics & Gynecology and Reproductive Biology, fewer than 10 instances of the phenomenon had been recorded at the time.

Ordinarily, hormonal and physical changes during pregnancy prevent another conception from occurring. That was not the case for Roberts.

“Instead of stopping ovulation, she released another egg about three or four weeks after the first one, and the egg somehow miraculously managed to fertilise and implant in her uterus,” Walker said.

Although Roberts was taking a fertility drug to stimulate ovulation, Walker said he’s “not convinced” that the medication – which can increase the chances of having multiples – is what caused the superfetation.

“She didn’t release two eggs at the same time, which is what the medication normally does,” Walker said. “But we have no way of proving it one way or another.”

While Walker was initially concerned about how the pregnancy would progress, he said, “the rate of growth for both of the babies was good, which was reassuring.”

When he gave Roberts and her partner, Rhys Weaver, 43, the diagnosis, “it was a massive shock,” said Roberts, who also has a 15-year-old daughter. “We went home and got straight onto Google.”

Surfing the Web, she said, proved mostly futile because there is minimal research and there are few examples of successful superfetation pregnancies. The condition is so rare that alleged cases are sometimes met with cynicism.

“There is very little information, because this is not supposed to happen,” Weaver said. “It was just crazy news.”

Over time, though, the notion of carrying two separately conceived babies began to normalize, Roberts said. While it might not have been the pregnancy she expected, after years of longing for another child, she was thrilled to have not just one but two on the way.

Given the rarity of the condition, coupled with Roberts’s age and the common risks associated with carrying twins, the pregnancy brought some challenges, particularly during the third trimester. The couple were told that the younger baby might not survive.

“Anything that can go wrong with a pregnancy is more common with twin pregnancies,” Walker said. “But with a three-week difference, you don’t want to compromise the smaller twin by delivering too early. You have to keep a really close eye. The delivery was crucial in this case.”

Roberts knew preterm labor was probable, so ensuring that the smaller baby was far along enough before birth “was a really massive worry for us,” she said.

At just over 33 weeks into the pregnancy, the smaller fetus’s umbilical cord was not functioning normally, which started to affect the baby’s growth. Doctors decided it was time to deliver.

“We got to see both of them as soon as they were born,” Roberts said. “It was absolutely beautiful.”

“One of the best feelings I’ve ever had,” Weaver said.

The family’s initial bonding time was short-lived, as both babies were whisked away to the neonatal intensive care unit. Noah remained in the hospital for just over three weeks, while Rosalie stayed for 95 days.

The couple drove to the hospital every day to visit their children until just before Christmas, when they were given the go-ahead to bring Rosalie home.

“We could finally get on and start our lives. It felt like we were on hold having them in the hospital,” said Roberts, who designs children’s clothing.

Taking care of twins, who are now almost 6 months old, has been a whirlwind, especially during the pandemic lockdown and while working from home. But Roberts said it has made her heart full to watch the babies grow and develop over the past few months.

“Even though they were born on the same day, there’s definitely an age difference between them,” she added. “It’s noticeable.”

Rosalie is much smaller and less advanced than her brother, “but she’s catching up to him fast,” said Weaver, a mortgage adviser.

Regardless of their developmental differences, the twin bond is unmistakable, the couple said.

Roberts and Weaver have been documenting the twins’ growth over the past few months on an Instagram page, and thousands of people around the world, fascinated by their story, are following along.

“We want people to be able to continue to watch as they grow up,” said Roberts. “Miracles can happen, and my children are proof of that.”

Previous Blood clot worries spark switch to Pfizer jab in under-50s
Next After preparing for the Games in the garage, Tokyo looms for Aussie teen sport climber