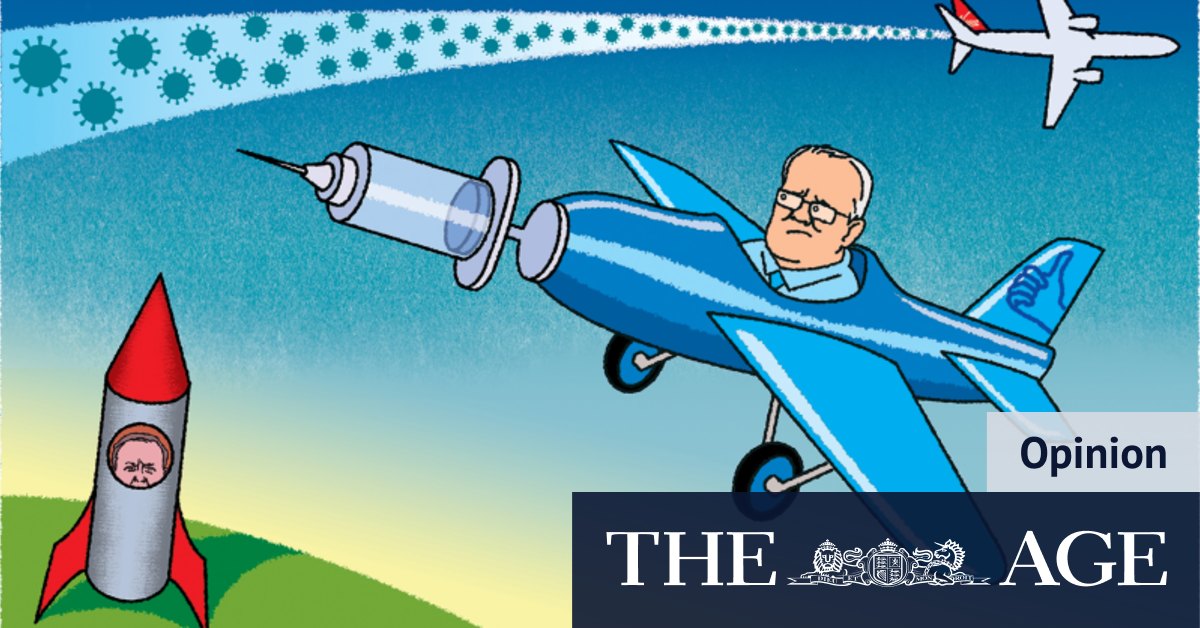 On Saturday, when the Sydney lockdown was announced, Morrison – so proud of his Sydneysider status – was largely absent. As a friend pointed out to me, what better day for the Prime Minister to remind people of the importance of vaccinations? But Morrison was stuck, because that might have carried the implication that a better vaccination program could have helped avoid situations like this. (We got a YouTube message from him eventually – but vaccinations weren’t mentioned.)

I asked Raina MacIntyre, head of the Biosecurity Research Program at the Kirby Institute, if this lockdown might have been avoided if our vaccination rates were higher. I suspected the answer would be no, but in fact MacIntyre told me it was possible, if we had reached 80 per cent of adults vaccinated. With our current pitiful rates, that number might sound high, but MacIntyre pointed out that we get more than 90 per cent of infants vaccinated, and more than 70 per cent of over-65s get their flu vaccinations.

MacIntyre went on to make another point. We began this pandemic with very low rates of vaccine hesitancy, as well as a civic-minded population: “the perfect setting for a determined and rapid vaccination campaign that could have started in December 2020”, as it did elsewhere. Instead, we are now seeing quite a lot of hesitancy.

Not all of this is the government’s fault – the blood clotting issue would have arisen whatever it did. But we will never know how the public might have reacted had the government made the case for vaccinations earlier and more determinedly.

We do know why the government has still not moved into the “rallying phase” of its program (that is, an ad campaign). If the rallying worked, there would not, currently, be sufficient vaccines to meet demand. We know this because we were told, last week, by Lieutenant General John Frewen, who Morrison appointed to run the vaccination effort. At first I worried that involving military figures might presage a similar level of secrecy to Operation Sovereign Borders. Instead, Frewen has committed to transparency. So far, he has been refreshingly direct.

And so it is interesting that both the Chief Medical Officer and Morrison last week spoke about the planning being done for post-vaccination life. The premiers and the Prime Minister’s Department are apparently working with modelling to decide what additional freedoms vaccinated people might be given. The government has been cagey about releasing modelling in the past. We should hope Frewen convinces the Prime Minister otherwise.

But first we have to get through the current outbreak. The NSW numbers are rising. And now the strain in NSW has crossed state borders.

Whether or not this lockdown could have been avoided through vaccinations, it will put more pressure on Morrison. Just how much will be determined by five factors. One is how far the virus spreads. The second is how long the lockdown lasts. The third is whether further problems arise with vaccinations during this period. The fourth is how much the premiers decide to attack. The fifth is Anthony Albanese.

It is hard to imagine Labor getting a better chance than it has right now to drive home its arguments about Morrison and vaccinations. Labor MPs who disagree with Albanese’s approach in other areas should give him this chance – and Albanese must take it.

That said, the Labor leader may have more time on his side than expected. There has been much speculation around election dates recently. This outbreak surely dims the prospect of a poll this year. Both Labor and voters would rightly ask why the government would choose to spend energy on anything other than the vaccine rollout. Imagine, too, if the virus got loose during a campaign – or, worse, made voting difficult, because a state was in lockdown?

If the Prime Minister learned, last week, that managing this virus once says nothing about your ability to do it again, then he should realise that the same goes for managing the politics of this virus. Each stage is quite different from the last. Success in 2020 has little bearing on 2021.

The Opinion newsletter is a weekly wrap of views that will challenge, champion and inform. Sign up here.

Previous AFL running out of options amid COVID-19 border closures
Next ‘The most dominant win we’ve had so far’: Crushing victory for Verstappen in Austria

Melburnians head for the country and Brisbane in wake of virus

While Sydney and Melbourne shed residents, Brisbane and Perth are increasingly attractive to internal migrants. …