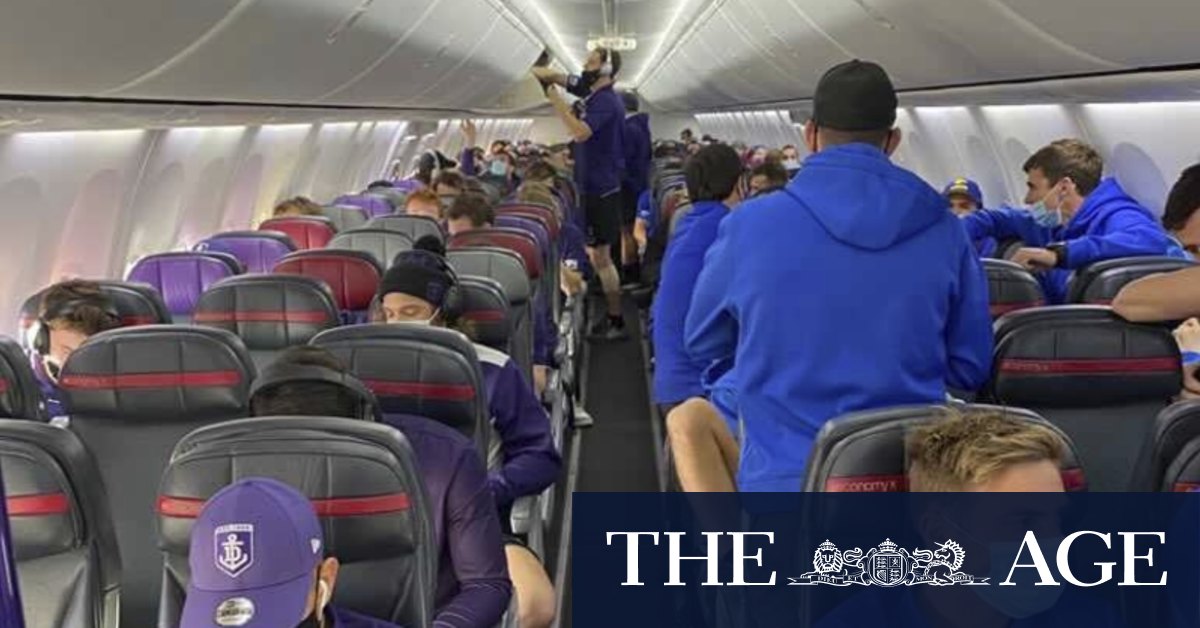 “The AFL put one tester on for 80 people,” Schofield said.

Tuesday’s day of drama, where 16 of the AFL’s 18 clubs finished the day in Victoria, had Brisbane and Gold Coast players flee Queensland to beat a border closure deadline by just an hour after being delayed on the tarmac because of another luggage mix up.

“As of this evening we will have all 18 teams in Victoria.”

On Wednesday, the AFL confirmed Port Adelaide and Adelaide would travel to Melbourne on an afternoon charter flight to minimise risk for the competition.

“As of this evening we will have all 18 teams in Victoria and, as a competition, we will continue to remain adaptable where required,” AFL fixtures boss Travis Auld said.

Neither WA club knows how long their interstate stay will be but Fremantle was expected to play its next two games against Carlton and Hawthorn in Tasmania, while the Eagles were hopeful of a return to Perth on Sunday after their rescheduled clash with Sydney in Geelong that day.

Both teams brought extended squads, with only players with season-ending injuries remaining in Perth. Injury-prone Dockers defender Joel Hamling travelled, as did suspended Eagle Willie Rioli, who can return to AFL action in round 23.

The impromptu travel plans were caused by Mr McGowan’s snap four-day lockdown which started at midnight on Monday.

Dockers chief executive Simon Garlick said the club would be based in Melbourne and use the training facilities of AFL clubs there until the location of its round 16 match was confirmed.

Coach Justin Longmuir felt for Fremantle fans who had lost their second home game of the 2021 season but urged his players to tackle the challenge head on.

“We just have to charge on and make sure it doesn’t affect us in a negative way.” he said.

“We play Hawthorn in Tasmania next week so we will be away for that game. Fingers crossed post that game we can get home and get back into the normal season.

“Governments have been good at handling these things in the past and our government in WA in particular has been able to get on top of these things quite quickly.”

Mr Auld hinted strongly the Dockers clash on Saturday would be in Tasmania.

“The only reason I say Tasmania may work well … the opportunity to get content in there in a year like this, you don’t normally get,” he said.

West Coast chief executive Trevor Nisbett said the club had taken as many players as possible and, while most had left their families in Perth, including midfielder Tim Kelly, teammates Jack Redden and Nathan Vardy were accompanied by their young children.

Mr Nisbett wrote to Eagles members on Tuesday night urging them to forgo compensation for Sunday’s lockout against the Western Bulldogs to help the club through its latest COVID-19 financial crunch.

Despite West Coast’s strong financial position – the club came into 2021 with nearly $22.5 million in member credits after playing just five games with reduced crowds at Optus Stadium last season – Mr Nisbett said the loss of crowds at two home games this year had potentially cost the club $6.2 million in revenue.

Previous One thing is clear: young Australians want the jab – but please don’t confuse us
Next ‘Best place to be’: More NRL at AAMI Park would be a good thing, says Bellamy