From the Archives, 2012: Suns hunt down Tigers 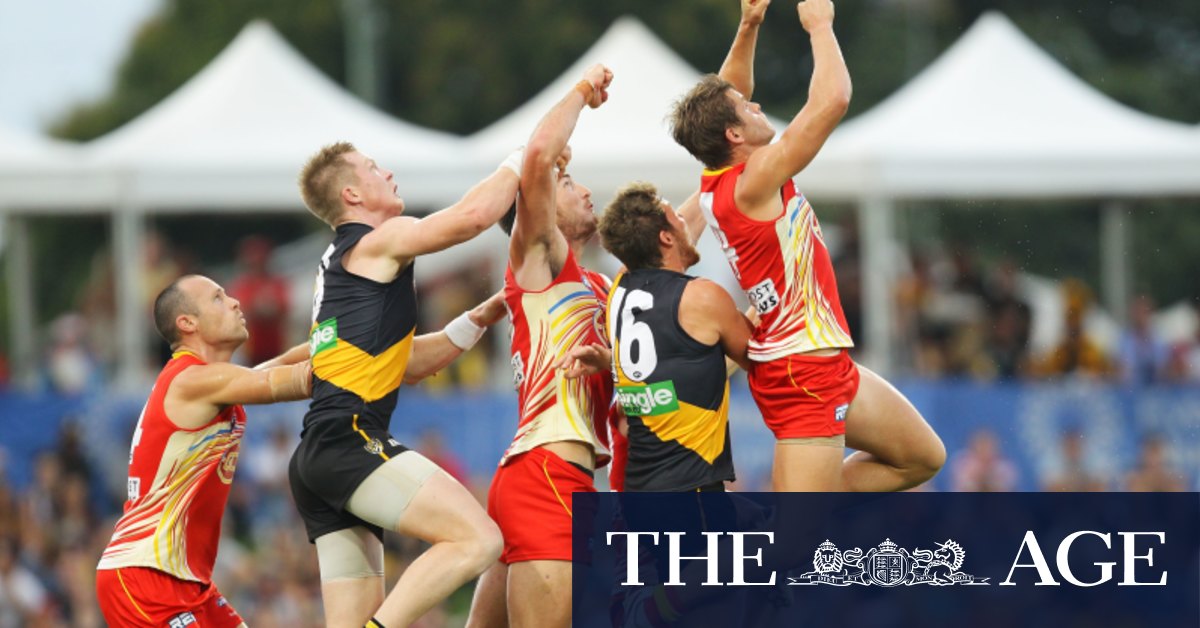 But much as the Tigers seemed to be in control of the contest for most of the second half of this game, the reality was the Suns thoroughly deserved this, their maiden victory of the season, and perhaps the extraordinary circumstances in which it was achieved, too, which will win them many new admirers.

Perhaps emboldened by their near-upset of Geelong last week, they were playing their most confident football of season 2012. Harley Bennell lurked like a cat around every contest. McKenzie, shifted to defence, was mopping up and delivering to his teammates with aplomb. Hunt even had the hide to blind-turn Trent Cotchin.

Then there was Josh Hall. An elite high jumper — his best clearance is 2.26 metres — Hall narrowly missed selection for the London Olympics before being snapped up, aged 22, by the Suns. Elevated from the rookie list for Seb Tape, he moved beautifully and kicked two goals to half-time, after which he went off with a cramp.

Unfortunately, the third quarter has been the Suns’ nemesis all year, and it was a rejuvenated Tigers that roared out after the break. As Richmond got on top in the clearances, Jack Riewoldt came into his own. And what he didn’t mark, Robin Nahas cleaned up at his feet. They had eight goals between them by the final change.

Their efforts put the Tigers back in front, but the Suns came again, Gary Ablett putting Hunt in the clear to kick his second goal in AFL football, and Aaron Hall, Josh Hall’s substitute, slotting another.

Still, the Tigers looked to have enough in reserve, with Luke McGuane marking strongly for an unlikely second goal after being moved into attack, and Riewoldt bringing up his fifth from a free kick.

That Richmond managed to lose from there will shake the club. It will be a dark week at Tigerland. They’re an emerging group, the Tigers, but still an immature one: still prone to losing games they should win. And they keep finding new ways to clutch defeat from the jaws of victory.

Josh Hall’s first touch would have pleased his coach: collecting a bouncing ball on the forward flank, the 196-centimetre rookie sprinted away from Kelvin Moore, weighed his options and kicked it to an open Sam Day. He should have had the shot himself, but it was his awareness and team play that caught the eye.

Richmond needed its elite talent to stand up when the chips were down yesterday and no one did it better than Trent Cotchin, who gathered 21 possessions to half-time and finished with 38. No Tiger worked harder for his club, or used the ball better.