Breaking News
Home / Business / Mad AZ hell: Too many cooks and not enough vaccines leaves public in the lurch

Mad AZ hell: Too many cooks and not enough vaccines leaves public in the lurch

admin 4 weeks ago Business Comments Off on Mad AZ hell: Too many cooks and not enough vaccines leaves public in the lurch 25 Views 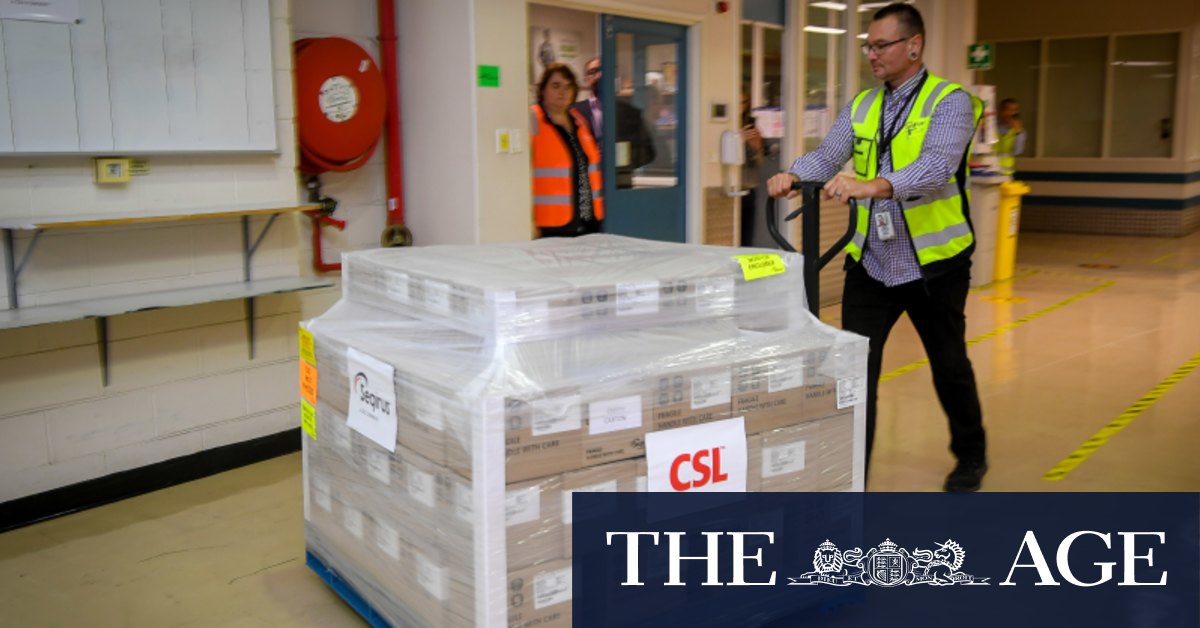 Yet that was mild compared with the extraordinary attack launched at Morrison by Queensland premier, Annastacia Palaszczuk and her chief health officer, Dr Jeannette Young, on Wednesday morning.

“I don’t want an 18-year old in Queensland dying from a clotting illness who if they got COVID, probably wouldn’t die,” a furious-looking Young railed. It would be asking “young, fit, healthy people to put their health on the line [by] getting a vaccine that could potentially significantly harm them.”

At a point where nearly 12 million Australians were enduring some form of lockdown, across four states and territories, politicians and top health officials were suddenly in the midst of a full-blown brawl. It marked a new low point in what’s become an increasingly bitter and heated debate about both pace and strategy in the nation’s beleaguered vaccine rollout.

Young and Palaszczuk’s fiercest critics immediately accused them of handing a propaganda win to the anti-vaxxers. The Commonwealth’s former deputy chief medical officer, Dr Nick Coatsworth, described Young as being out on a “very lonely limb”.

Sydney University Professor Julie Leask, an expert in vaccination strategy, was more diplomatic, saying 16 months of unremitting toil was clearly taking a toll on the communicable diseases community, adding that Young was “not as careful of her language as she could have been”.

Former Prime Minister Malcolm Turnbull also leapt into the fray, saying of Australia’s sluggish vaccine rollout: “I can’t think of a bigger black and white failure of public administration than this”.

Victorian Premier Dan Andrews and Western Australian Premier Mark McGowan seized the moment to join Palaszczuk in agitating for a drastic cut in the numbers of overseas arrivals, citing the ominous threat posed by the highly infectious Delta variant.

So by the time Friday’s much anticipated national cabinet meeting rolled around, all eyes were on Canberra to see if some facade of unity and common purpose could be restored.

Morrison emerged from the meeting with a four-stage plan in hand, a “turning point” as he described it. It’s crafted around gradually moving the nation away from snap lockdowns and relentless suppression of community transmission to managing COVID “like any other infectious disease”. Time-frames are still loose.

It also slashes caps on overseas arrivals by 50 per cent, at least till early next year – grim news for Australians with family members trapped overseas. Yet it allowed him to retrieve a victory of sorts from a torrid week. “From time to time we’ll have a disagreement … but we get in the room and we get it done” he told the Canberra press pack.

‘You have the PM saying one thing, the whole medical profession another – it’s a nightmare.’

He sharply rejected the claim that he’d raced ahead of medical advice with his almost casually delivered remarks about vaccines for under-40s on Monday.

Morrison’s surprise announcement on AstraZeneca was not, in fact, entirely new policy.

What was new on Monday evening was the unveiling of a new, no-fault indemnity scheme for GPs administering COVID vaccines. Morrison tied this to an observation that younger Australians were not precluded from receiving AstraZeneca, and when a journalist asked him whether this applied to under-40s as well, he replied that it did. This dragged into the light an option that had, in reality, been hiding in plain sight for some time.

Khorshid acknowledged during the week that there had never been a ban on younger Australians receiving AstraZeneca provided they got sound medical advice first and if the preferred Pfizer alternative wasn’t readily available.

The real problem, he said, lay in Morrison mangling the message, while the comments from Palaszczuk and Young had also been particularly unhelpful.

“They are demonstrations of why we really need as much as possible to keep the politicians out of the communication of health, because it is complex and it has been made more complex by the PM,” he complained.

“A lot of Australians would sign up for AZ tomorrow, if they had access to it. Unfortunately it’s blown up into another crisis, which could well have the opposite impact.”

RACGP President Dr Karen Price found out about the Commonwealth decision on the indemnity scheme via a text from a minister on Monday night.

“I was thrilled” she recalls. But then other messages started pouring in, and she said it became clear that the big news had become the fact under-40s were now broadly able to go and ask their GPs for the AstraZeneca shot.

“We’ve seen the whole social media just go into overdrive,” she said. Her job now, she says, is to “keep the sector as calm as possible, with as much good information as possible. And I am sticking to the evidence base, which is ATAGI [Australian Technical Advisory Group on Immunisation].”

The Grattan Institute’s Stephen Duckett, a former head of the federal health department, says Morrison’s altered messaging on Monday was a missed opportunity.

It could have been marketed as “recognising there is a small risk and ‘we are doing everything we can to make sure the vaccine is safe’. That is a really good and powerful message that assures people that we’re on their side.”

“Instead, the thing was dribbled out, there was a lot of media reporting of the clot risks … really, they managed that announcement very, very poorly. You have the PM saying one thing, the whole medical profession another – it’s a nightmare.”

Infectious disease social scientist at UNSW Associate Professor Holly Seale is worried that “when everything is so fluid, there is a danger of mixed messages and misinformation.”

The Kirby Institute’s Professor John Kaldor points out that “the fundamental health advice is that for people under 60, the Pfizer vaccine in the Australian environment has the more favourable benefit-risk ratio and that advice stands. However there is also an understanding that people want choices – and if we want to enhance uptake of vaccine, it’s good to provide choice.”

In Australia, the stark fact remains that for those who don’t want to wait until millions more Pfizer doses arrive, AstraZeneca is readily available and alternatives are not.

Despite battling a worrying breakout of the Delta variant in NSW, Premier Gladys Berejiklian has made clear her government’s vaccination hubs won’t be administering AstraZeneca to under-40s. Sydney remains on a knife-edge, with fresh cases emerging in healthcare workers and 31 new cases on Friday: the highest daily figure to date in the current outbreak.

Berejiklian has nominated getting at least 80 per cent of the state vaccinated before she thinks the state will get to some kind of “COVID normal” but Morrison wouldn’t be drawn on specific targets on Friday, saying it would be left to scientific advice.

While Australia continues to languish at the bottom of the OECD vaccination ladder, but there was a glimmer of positive news late in the week when Morrison’s new vaccine logistics supremo, Lieutenant-General John “JJ” Frewen, released figures showing over 30 per cent of the population aged 16 and over had had at least one vaccine dose.

Across the country, there had been 3.5 million doses administered in June – 1 million in the last 8 days, a pace the government hopes to maintain.

One overriding question remains: how did a country that was universally hailed for its unrivalled success in keeping COVID-19 at bay stumble so badly at the vaccine hurdle?

Arguably the original sin lay with the federal government in not ordering a broader suite of vaccine options when the prime contenders were in development last year. But with scores of potential vaccines on the horizon choices had to be made.

In the first instance, the government settled on four, employing three different technologies. It ordered the viral vector-based AstraZeneca shot, Pfizer’s mRNA vaccine, and two protein-based vaccines: the University of Queensland vaccine being developed locally, and another being developed by Novavax.

The UQ vaccine, for which the government had high hopes, fell over when it was discovered during trials that it generated false HIV positive readings because of the way a small part of the HIV virus had been built into the design.

Novavax has been dogged by delays for filing regulatory approvals but the government has 51 million doses on order, which the company says are still on track to start flowing before the end of this year.

Pfizer has been a huge success internationally, but supplies here have been constrained by Australia falling “to the back of the queue”, as Finance Minister Simon Birmingham acknowledged this week. Nor can it be made here, as we lack the advanced mRNA (messenger RNA) manufacturing capability it requires.

AstraZeneca, which Australian biotech company CSL manufactures under licence in Melbourne, remained the workhorse – but then fell partial victim to the blood clots scare.

CSL’s chief scientific officer, Dr Andrew Nash, said at a tour of the company’s Broadmeadows site this week that “There is a lot of hindsight thinking and discussion going on at the moment. But at the time, the AstraZeneca vaccine, given the technology, was certainly a clear positive candidate for us to look at”.

“I don’t think there was any over-egging [of it]; it was just trying to understand the likely potential, and certainly, the side effects that we’ve seen with AstraZeneca could have never been predicted”.

Experts and economists told this masthead that while Australia got unlucky in some ways, it should have spent more on a broader portfolio of vaccines to reduce the risk of that bad luck having such an impact.

Flinders University Professor and founder of COVID-19 vaccine developer Vaxine, Nikolai Petrovsky, said he and those in the industry were not surprised by some of the challenges now on display.

“I guess we tried to give advice to the government all last year – to be cautious and not to promise too much. I think [the challenges] were predictable.”

The government has come under fierce pressure over the past six months to bring Australia’s sovereign vaccine manufacturing up to scratch, but even local pioneers of mRNA vaccine technologies in Australia say it’s highly unlikely this country would have ever been in a position to manufacture Pfizer or any other of the successful mRNA vaccines in time to face this pandemic.

“I think the only way we could have been managing it right now is if we had entered into a similar deal to the one that CSL had with AstraZeneca,” says the University of Western Australia’s Professor Archa Fox, an mRNA industry expert.

“It would have been impossible to do without a third party – without Pfizer, BioNTech or Moderna. They would have had to send critical experts out here very early on, but [at that time] they were focused on their Europe and US production sites.”

The government is shaking the tree for international supplies and more are on their way: another 28 million doses of Pfizer still to arrive in the fourth quarter, and 10 million doses of another mRNA vaccine manufactured by Moderna are also set to arrive before the end of the year, with a further 15 million slated for next year.

Meanwhile, the situation in NSW – with more than 300 exposure sites across Sydney alone – is a stark warning of how tenuous our hold on something like a COVID-safe existence is.

Previous Around the world people ask: “Can we get home?”
Next Underquoting? Auction results soar above quoted price guides