In rare protests, thousands of Cubans take to the streets, demand ‘Freedom’

admin 2 weeks ago World News Comments Off on In rare protests, thousands of Cubans take to the streets, demand ‘Freedom’ 12 Views 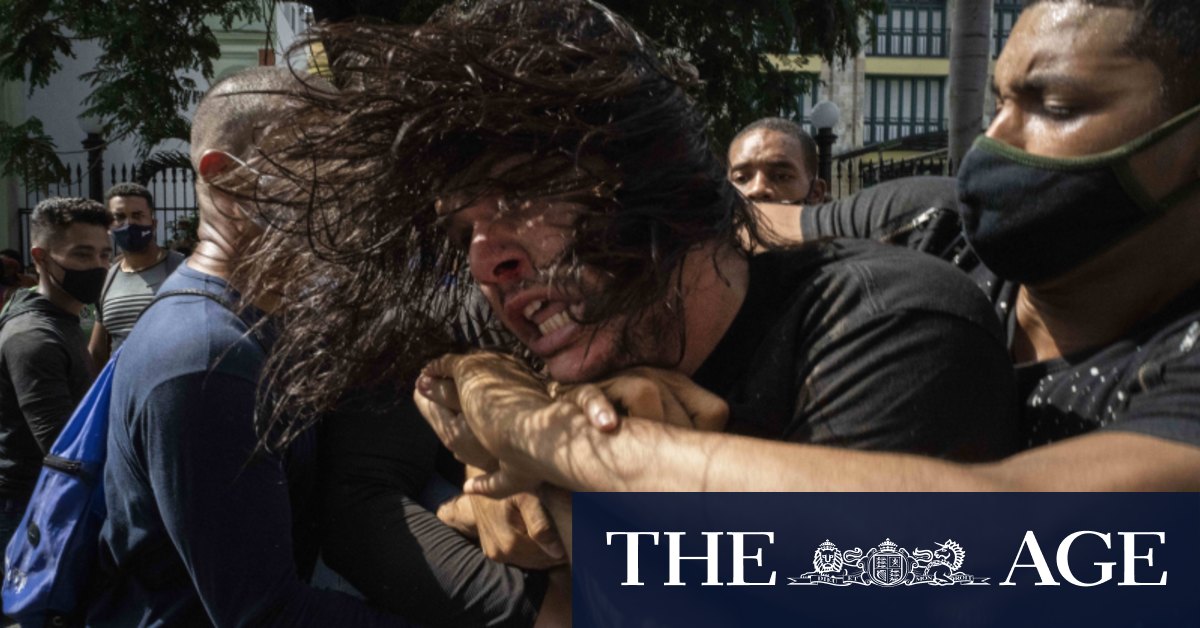 Special forces vehicles with machine guns mounted on the back were seen in the capital, Havana, and Diaz-Canel called on supporters to confront “provocations”.

Police pepper-sprayed a few protesters and hit others with batons, but there was no attempt to directly confront the thousands chanting “Freedom” as they gathered and marched in the city centre. Their shouts of “Diaz- Canel step down” drowned out groups of government supporters chanting “Fidel”.

The protests broke out in San Antonio de los Banos municipality in Artemisa Province, bordering Havana, with video on social media showing hundreds of residents chanting anti-government slogans and demanding everything from coronavirus vaccines to an end of daily blackouts.

“I just walked through town looking to buy some food and there were lots of people there, some with signs, protesting,” local resident Claris Ramirez said by phone.

“They are protesting blackouts, that there is no medicine,” she added.

Diaz-Canel, who had just returned from San Antonio de los Banos, said many protesters were sincere but manipulated by US-orchestrated social media campaigns and “mercenaries” on the ground, and warned that further “provocations” would not be tolerated.

An official in the Biden administration tweeted support for the demonstrations.

“Peaceful protests are growing in #Cuba as the Cuban people exercise their right to peaceful assembly to express concern about rising COVID cases/deaths & medicine shortages. We commend the numerous efforts of the Cuban people mobilising donations to help neighbours in need,” tweeted Julie Chung, acting assistant secretary for state for Western Hemisphere affairs.

Cuba’s director general for US affairs, Carlos de Cossio, dismissed her remarks in his own tweet: “US State Department and its officials, involved to their necks in promoting social and political instability in #Cuba, should avoid expressing hypocritical concern for a situation they have been betting on. Cuba is and will continue to be a peaceful country, contrary to the US.”

There were protests later on Sunday hundreds of kilometres to the east in Palma Soriano, Santiago de Cuba, where social media video showed hundreds marching through the streets, again confirmed by a local resident.

“They are protesting the crisis, that there is no food or medicine, that you have to buy everything at the foreign currency stores, and on and on the list goes,” Claudia Perez said.

“We are calling on all the revolutionaries in the country, all the Communists, to hit the streets wherever there is an effort to produce these provocations,” Diaz-Canel said in his broadcast remarks.

The Communist-run country has been experiencing a worsening economic crisis for two years, which the government blames mainly on US sanctions and the pandemic, while its detractors cite incompetence and a Soviet-style one-party system.

A combination of sanctions, local inefficiencies and the pandemic has shut down tourism and slowed other foreign revenue flows in a country dependent on them to import the bulk of its food, fuel and inputs for agriculture and manufacturing.

There has been a surge in COVID-19 cases and deaths this year, with a record 6900 cases and 47 deaths reported on Saturday.

Cuba has two vaccines and has begun a mass vaccination campaign, with 1.7 million of its 11.2 million residents vaccinated to date and twice that many at various states of the three-shot process.

Berlin: An explosion at an industrial park for chemical companies shook the German city of …