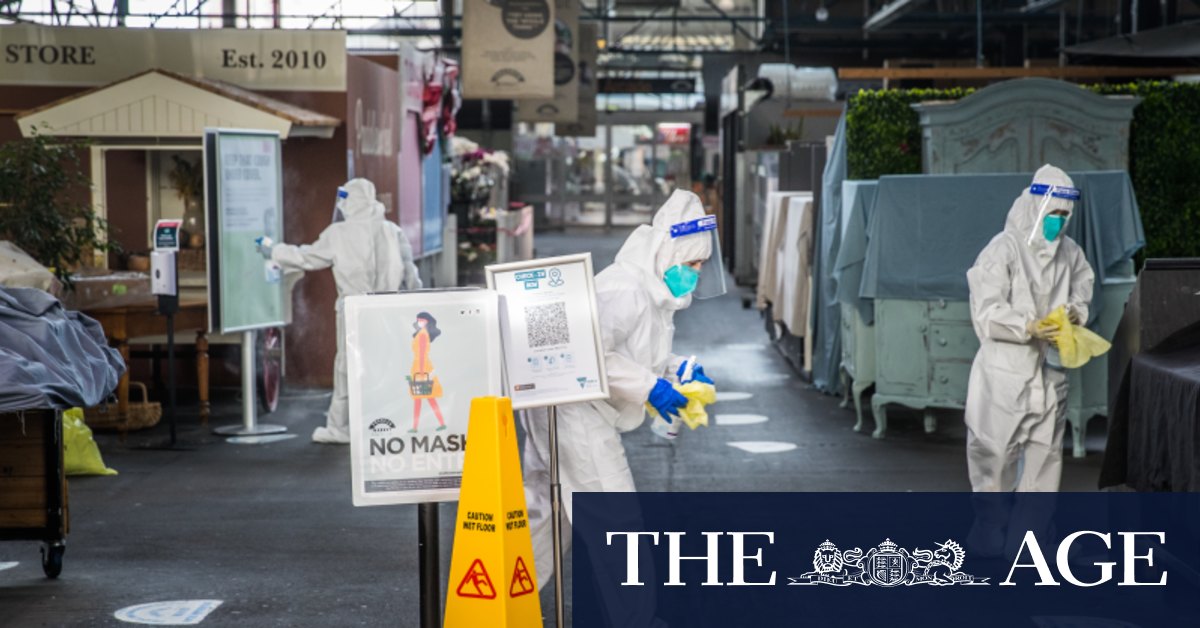 There are now 19,000 people in Victoria isolating as primary close contacts throughout the state.

On Thursday, five people in the state were in hospital with COVID-19, including one person in intensive care.

There are now 146 active cases of coronavirus in Victoria, 133 of which are linked to the two outbreaks seeded from NSW.

The figures come as NSW recorded a record 124 new COVID-19 cases, with at least 48 of those cases active in the community while infectious.

NSW Premier Gladys Berejiklian warned the state needed to brace itself “for cases to go up even higher”.

92% of Victorians in quarantine for entire infectious period: Foley

The percentage of Victorians in quarantine for their entire infectious period has jumped from 6 per cent to 92 per cent in three days, Mr Foley said during Thursday’s COVID-19 update.

Acting Chief Health Officer Ben Cowie said one woman who was infectious while in the community went to great lengths to ensure she wouldn’t spread the disease while filling up petrol.

When she was contacted by health officials and told she was a close contact, she immediately travelled back home from regional Victoria into isolation, Professor Cowie said.

She then “only made that one stop for petrol had limited contact with staff, and even disinfected the credit card that they were using before handing it over”.

A residential aged care facility west of Melbourne is on high alert, after a resident returned to the centre from hospital potentially infected with coronavirus.

The Mecwacare John Atchison Centre in Hoppers Crossing was notified on Thursday morning that a resident who’d come back from hospital might have COVID-19.

The centre was waiting on Thursday afternoon to get the resident’s COVID test result back.

“As a precaution, we also completed a deep clean of the entire home today,” the spokeswoman said.

A case in the Greater Bendigo area in regional Victoria was among the new cases of COVID-19 reported on Thursday, the first positive case in the local government area in almost six months.

Bendigo Health confirmed the case was not in the community while infectious after details of the infection were added to the Health Department’s website.

The last time central Victoria had a positive case was in September 2020.

There are now at least six active cases in regional Victoria linked to the new outbreak. Mildura, in Victoria’s north-west, recorded two new cases on Thursday, taking its total to four active cases, and another case was reported in the Wellington local government area this week.

Two more people have died after being diagnosed with the rare blood clotting disorder associated with the AstraZeneca vaccine.

The Therapeutic Goods Administration said a 44-year-old man from Tasmania and a 48-year-old woman from Victoria died in the past week after receiving the first dose of the vaccine.
Both had confirmed cases of thrombosis with thrombocytopenia syndrome (TTS).

“We extend our sincere condolences to their families and loved ones,” the TGA said in its weekly vaccine safety report.

Since the beginning of the vaccine rollout in Australia, a total of five deaths from TTS have been reported out of 6.1 million doses of the AstraZeneca vaccine. A sixth death linked to the vaccine was recorded from immune thrombocytopenia.

All the deaths were related to a first dose of the vaccine.

Over the past week, there have been four additional confirmed cases of TTS likely to be associated with the AstraZeneca vaccine.

Mr Morrison made the remarks during a press conference on Thursday afternoon after he had come under pressure for not apologising for missteps and delays in the vaccine rollout.

Mr Morrison said he took responsibility for the vaccination program and for the challenges.

“I’m certainly sorry that we haven’t been able to achieve the marks that we hoped for at the beginning of this year. Of course I am,” he said.

However, he insisted things have turned around over the past month, with the rate of those fully vaccinated almost tripling.

Two tier-1 sites are linked to the Prahran Market and 900 people are already in isolation as a result of that exposure.

The new tier-2 sites listed included the service station in Heyfield at which the positive case mentioned above stopped, which is 206 kilometres east of Melbourne, and a Forever New clothing store in Craigieburn.

Anyone who has visited tier-2 exposure sites has to get tested for COVID-19 and isolate until they receive a negative result. The full list can be viewed here.

With Daniella White and Katina Curtis

Previous ‘There were some dark days’: Smith extends stay at Roosters after comeback
Next All Time Legend keeps Bridge and McEvoy guessing